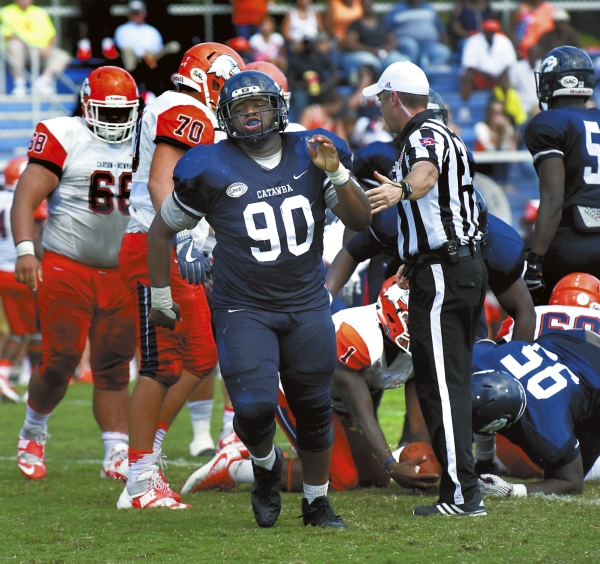 SALISBURY — Catawba head football coach Curtis Walker enjoyed one of those moments Division II coaches live for after last spring’s Blue-White Spring Game.
Walker was able to tell the Bembry family that their son, Trevor, a defensive end who had come to Catawba as a walk-on, had earned a scholarship.
“I’ll say he earned it,” Walker said. “Started every game for a championship team as a sophomore. What a year he had.”
Bembry is from Prince George County, Va., about eight miles east of Petersburg. Fort Lee, a U.S. Army Post is located in Prince George County, and the Bembrys are a military family.
Trevor, 20, has a brother named Tyler, who is considerably larger, although he’s 18 months younger.
“Growing up, I’d always tell Tyler that he’d never be as good as me,” Trevor said. “Then we’d start wrestling each other.”
The Bembry boys grew up playing football with the Good Shepherd Spirits, the local youth organization. Trevor played offensive line and defensive line and handled kicking duties.
Trevor went on to become an all-conference player as a two-way lineman for the Prince George High Royals, but there was limited recruiting interest. He stood 6 feet tall and weighed 245 pounds.
The school most intrigued with his potential was Division II Virginia State, a CIAA program just a few miles from where the Bembrys lived. Trevor visited Virginia State but kept his options open.
The priority for Trevor was education. His career interest was in business and accounting. If he could find a school with a quality business program where he also would have a chance to play football,that would be the perfect scenario.
“My father (Troy) was familiar with Catawba and told me to look into Catawba,” Trevor said. “I did and I ended up sending an e-mail to Coach (Brian) Hinson.”
The Indians (2-2, 2-0 SAC) always are on the lookout for quality walk-ons. Walk-ons provide essential depth for a Division II program, but walk-ons aren’t expected to become starters. Catawba quarterback Mike Sheehan, now in his third year as the starter, and Bembry are exceptions.
Trevor was invited to visit Catawba and loved the campus.
“I remember meeting him and his family for the first time,” Walker said. “It was the summer of 2014. He was very interested in coming here and he wanted to know if he had a chance to earn a scholarship. We knew being a military kid that he would have the discipline to do what he needed to do. We told him if he did the job on the field, off the field and in the classroom, a scholarship could happen.”
Trevor didn’t have a redshirt year. The need for depth on the defensive line was great in the fall of 2014, and wearing jersey No. 98, he got on the field for three games as a true freshman.
“The guy who showed me the ropes, took me under his wing and encouraged me was Gabe Evans,” Trevor said. “Gabe was a senior when I was a freshman. It meant a lot to me that Gabe wanted me to take his No 90 jersey and carry on after his career was over.”
The jump for Trevor came between his freshman and sophomore years. Maybe it was that No. 90 jersey. He became a full-time starter in 2015. He was in on 35 tackles, and got 13 of those tackles in big South Atlantic Conference wins against Carson-Newman and Lenoir-Rhyne.
Then came spring drills, continued success and growth, and the announcement that Bembry, who now weighs 260 pounds, would be placed on scholarship for his final two seasons.
“It’s a pleasure when a young man earns a scholarship because a lot of families have to bite the bullet to send their kids to school,” Walker said. “Trevor has always done exactly what we’ve asked him to do, and he’s been a great surprise for us on the field. A joy to coach.”
Trevor’s younger brother, Tyler, all 330 pounds of him, is playing Division II football now for Chowan, a CIAA program. On Saturday, Chowan traveled to Salisbury to play Livingstone. Meanwhile, Catawba departed Salisbury on a trip to Wingate.
“Our family stays together on Saturdays,” Trevor explained. “They’ll either go to my game or to Tyler’s game, whichever is closer to home. So they went to Tyler’s game against Livingstone last Saturday. Tyler and I don’t communicate much during the week, but we do talk about our games on Sundays.”
Tyler had 2.5 sacks for Chowan against Livingstone.
Trevor tried to keep pace. Officially, he was credited with one sack at Wingate, although it appeared he was involved in two.
Trevor, who had a fumble recovery against Carson-Newman, had a chance to demonstrate his punch-the-air sack celebration for the third straight game in Saturday’s 48-26 win at Wingate. His confidence and his ability to make big plays are growing.
“My teammates and coaches gave me a hard time about my sack celebration when we watched the film,” Trevor said. “They were joking around. They said I looked really stiff.”
But as long as the sacks keep coming, no one’s going to be too worried about what the celebrations look like.