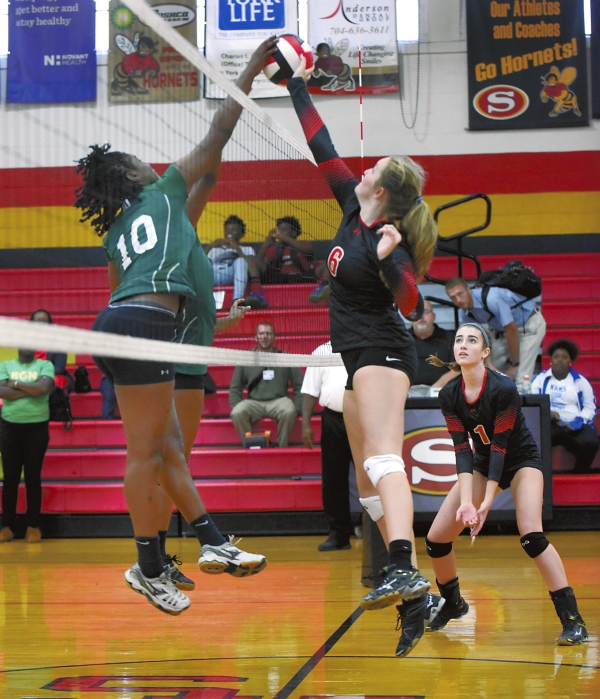 SALISBURY — Salisbury senior Juliana Anderson pounded 10 of her 19 kills in a dominating first set, and she got the Hornets started toward a 25-13, 25-18 and 25-13 win against Central Carolina Conference rival North Rowan.
“We’ve actually had a lot of issues with sluggish starts,” Anderson said. “But today we started really well.”
Salisbury-North is a rivalry in any sport, and the Cavaliers, who have impressive athletes, usually bring their most intense effort against the Hornets. Salisbury coach Andrea Davis said Anderson’s terrific opening act was the key to a day that went easier than expected.
“When we’re making good passes, Juliana is going to do very well,” Davis said. “Our passing was good in that first set and Juliana was able to light a fire in all her teammates.”
Anderson, a 5-foot-10 middle hitter, was the CCC Player of the Year each of the last two seasons, and she also was the Rowan County Player of the Year as a sophomore when Salisbury won the CCC championship.
Now her career is in the final stages, and she wants to go out with a bang.
“It’s gone by fast, but looking back on it, I’ve accomplished a lot of things that I’m proud of,” Anderson said.
Anderson had two kills in the opening minute for a 3-1 lead and smashed three in a row as the Hornets (6-7, 3-2 CCC) pushed an 11-5 lead to 14-5. That run knocked out the Cavaliers (2-8, 1-3 CCC), and Ariyan Duren Williams ended the first set with a nice kill.
“We always have to show up against North,” Anderson said. “Kaya Twitty did a great job setting, Abby Lee did a great job passing, and then a lot of other people started coming through.”
Bil’lizah Connor had four kills in the first set for North.
With Mikayla Young leading the way, North fought much harder in the second set and got a spark when Chevy Blaire and Brianna White teamed to block Anderson and cut Salisbury’s lead to 16-12.
The Cavaliers trailed, 18-16, after a kill by Connor and had momentum, but when Salisbury is in trouble it finds Anderson. Anderson’s kill made it 19-16, and Dakotah Insley’s ace made it 20-16.
An ace by sophomore Lila Harry put the Hornets ahead, 23-18, and the Hornets made it 24-18 when Twitty set up Anderson, who defeated a double block. Another ace by Harry ended the set.
Salisbury had six aces in that middle set, with Katie Bullock also getting two.
“North had some girls come on strong and their setter (White) made some very shifty plays,” Davis said. “Fortunately, we didn’t give up a lot of silly points.”
North had taken its best shot in the second set, and the third set was all Hornets. After a 3-all tie, Salisbury scored the next four points. Abby Lee had back-to-back aces to stretch the lead to 16-5, and the Hornets were never in danger.
“We kept momentum, and that meant we were able to play everybody,” Davis said.
Salisbury had a huge edge in aces, serving 14.
Connor, a sophomore, had eight kills to lead the Cavaliers.
“We needed to play stronger,” North coach Latesha Smith said. “We got this season started late, but we’re trying and we’re growing as a team every day.”