Chili comes in all flavors and heats 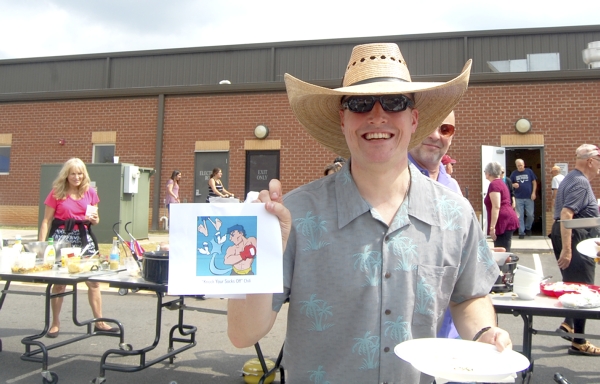 Sacred Heart Catholic Church had its annual parish picnic Sunday, and added, for the first time, a chili contest.

Thinking there wouldn’t be many entries for the first time, I volunteered my husband, Stephen, to make a pot for the competition. Neither of us are known as contest winners. In fact, whatever we enter, we usually lose.

I thought I’d write about the chili, since it may eventually get cool enough to make some, for the food page.

Well, a strange thing happened. Stephen won first place in the hot category of his chili. Ironically, he’s had a stomach bug, so he couldn’t even eat any of his chili.

And here’s my disclaimer: I was not a judge. I tasted none of the chilis, and all the pots were labeled with a number and the heat level. His was just one slow cooker among 13.

That’s the good news — 13 entires for the first chili contest. Colette Miller had the hard task of being organizer and vote counter. It was tough. Each judge  had a different way of grading the chili. And not all picked a winner in each category, hot, medium and mild. So, take two, each judge was asked to make that choice and revamp their ballots. That made things much clearer.

It all depended on the Rev. John Eckert, pastor, to break several ties. All he had to go by were numbered Dixie cups of chili. The Rev. Lucas Rossi, parochial vicar at Sacred Heart, was one of the contestants. Could Eckert pick out his colleague’s secret recipe?

Another disclaimer — I did not see any of the judge’s results. I didn’t answer questions or give advice. I observed.

And there were some good-looking chilis there.

There was one chicken chili. It looked innocent enough, but tasters proclaimed it hot, actually HOT! One judge, Tim Wills, after tasting it said it “made my breath feel like Smaug, the dragon in the ‘Hobbit’.”

One chili was vegetarian, using nuts to give it body. “I’ve never had chili with nuts,” said Gretchen McKivergan, another judge. “It has a different flavor. You wouldn’t think nuts would add too much, but they do … and it has a little kick.”

It was good enough to end up winning second place in the medium category. It took a family team to make it — Mary Key and Todd, Cole and Drew Hansen.

A couple of the chilis had corn in them. One was very juicy, a couple were quite thick.

Once the judging was over, the pots went onto the food line, where some disappeared quickly. Rossi’s spicy chili, which won third place in the hot category, disappeared fairly quickly.

Eckert was able to break the ties with his picks, and winners received a medal for their entries.

Along with chili, the picnic featured hot dogs, hamburgers, tons of side dishes and a very popular taco tent, where the line was long, but the service was quick.

Small tortillas were cooked on a flat cooktop outside, and passed to the head of the line, where Sister Elizabeth Castino gingerly filled the hot tortillas with beef. On it went down the line for cilantro, onions, verde sauce, radishes and lime wedges. Traditional tacos have no cheese or tomato sauce, relying on the fresh herbs and vegetables to brighten the flavor.

Talk about hot — the tacos had to cool a minute before anyone would eat them.

Here are some of the winning recipes

From the Hansen family: “This is a recipe that my family has enjoyed creating and entering into several regional chili cook-offs. We call it ‘Meat Lover’s Vegetarian Chili’ because we developed it to be as robust and satisfying as a hearty meat chili.

From the Blanton family:

1 28 oz. can crushed tomatoes in puree

Transfer meat mix to slow cooker, add tomatoes, beans and water, Frank’s sauce and 1 cup of the crispy onions.  Cover and cook on low setting for six hours (three on high).  Top with remaining crispy onions before serving.  May be served with sour cream and Mexican mix shredded cheese.

1 can diced tomatoes with green chilis

Brown beef and chorizo and drain fat. Add onion, peppers and tomato paste and cook until onion is softened, about 10 minutes.

Add spices and stir to combine. Cook for 1 minute, until spices release their aroma.

Add beans and tomatoes, simmer 1 hour. After simmering, check for seasoning. The chorizo can be quite salty.

In Dutch oven over medium heat, combine ground beef, sausage and onion. Saute for 10 minutes, or until meat is browned and onion is tender. Drain grease.

Add remaining ingredients, mix well, reduce heat to low and simmer for at least one hour.