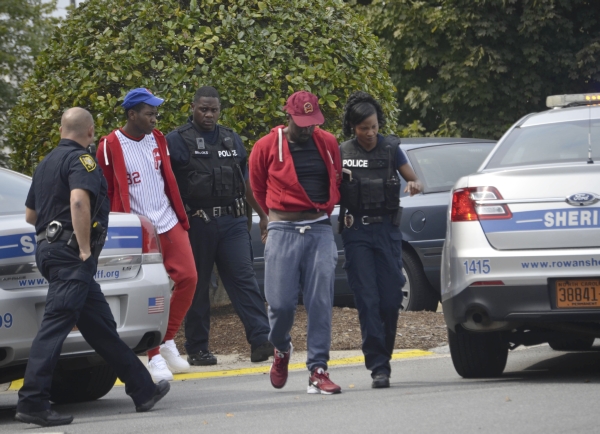 Authorities lead two men out of the Hampton Inn after nearly three hours of searching. The men and two others are charged with the armed robbery of a T-Mobile store. They then fled to Hampton Inn on Klumac Road, which authorities evacuated. Shavonne Walker/Salisbury Post

SALISBURY — Timothy King was asleep when he was awakened and told to evacuate his Hampton Inn hotel room Monday morning. Police escorted all guests and staff just before 11:30 a.m. after four men robbed the T-Mobile store and fled to the Klumac Road hotel.

King, of Salisbury, said he’d been staying at the hotel and had to evacuate when  two of the four suspects were apparently inside the room next to his. He saw authorities with riot shields and other gear go into the hotel.

King said he didn’t know anyone was in the room next to his and thought it was vacant. He was nervous with all that’s been happening in the world today, King said.

“I said all of this for cell phones. It’s crazy,” he said.

Police said three men entered the cell phone store around 10:27 a.m. and made customers and employees, at gunpoint, move to the back room and lie down.

The men took phones and money and then left in a white vehicle with a New York license plate. Police were given descriptions of the men, and officers located them walking into the hotel, a statement said.

When officers approached the men, they shut the door and went into a stairwell at the hotel. Officers were able to locate two suspects, who were immediately arrested.

Members of the Salisbury Police Department’s Special Response Team went inside the hotel to search room by room and on each floor to locate the two men. All of the men are from New York, authorities said.

Salisbury Police charged Ansel Harry Knight, 29, of Valley Stream; Christian Griffin, 21, of Jamaica; Chauncey Lewis, 19, of Hollis; and Kendel Greyer, 29, also of Jamaica, all with felony robbery with a dangerous weapon. Each was placed in the Rowan County jail under a $150,000 secured bond.

Chief Stokes said at the scene the men were armed when they robbed the T-Mobile store, but investigators were still looking for the weapons following the arrests. After the men were in custody, Stokes said it was too early in the investigation to say what connection the men had to the hotel.

Once the men were in custody, police returned to the area where they had been found to search further.

At one point after the Police Department’s special response team went inside the hotel, officers returned outside to get gas masks. Officials said that was a precaution.

Timothy King waited for the opportunity to return to his vehicle, which was still in the parking space closest to the entrance. Police wearing bulletproof vests were seen escorting some hotel guests to their vehicles and others to a Salisbury Transit bus. The bus was provided so guests didn’t have to stand around in the heat.

In addition to police, armed Rowan County Sheriff’s deputies were also on the perimeter of the hotel. The N.C. Highway Patrol was on the scene, aiding in the response. The Rowan County EMS and Salisbury City Fire Department were on standby on the other side of the parking lot, near Cici’s Pizza.

The American Red Cross provided water for guests and law enforcement. Police said they were appreciative of the help and cooperation from the staff at Hampton Inn.

Arnold Palmer dies at 87, made golf popular for…