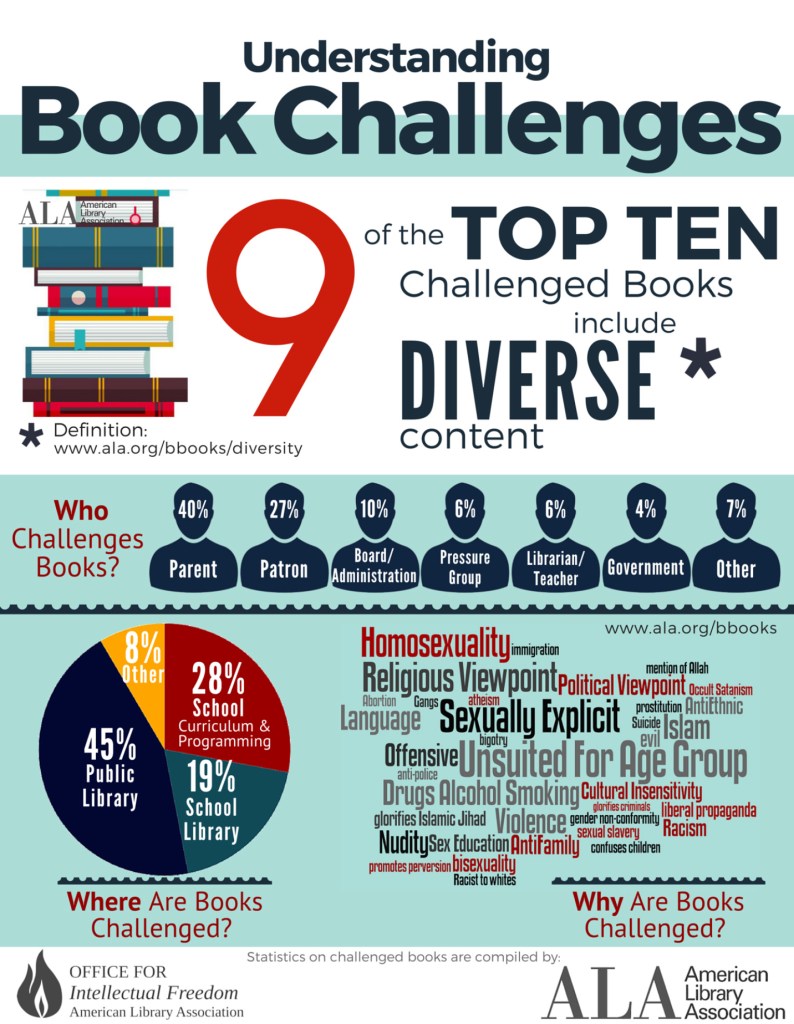 Regardless of format, digital or print, collections within school and public libraries continue to be challenged. A challenge is defined as a formal, written complaint filed with a library or school requesting that a book or other material be restricted or removed because of its content or appropriateness.

By focusing on efforts across the country to remove or restrict access to books, Banned Books Week draws national attention to the harms of censorship. The books featured during Banned Books Week have all been targeted with removal or restrictions in libraries and schools.

While books have been and continue to be banned, part of the Banned Books Week celebration is the fact that, in a majority of cases, the books have remained available. This happens only thanks to the efforts of librarians, teachers, students and community members who stand up and speak out for the freedom to read.

Banned Books Week is an annual event celebrating the freedom to read. Typically held during the last week of September, it highlights the value of free and open access to information. Banned Books Week brings together the entire book community – librarians, booksellers, publishers, journalists, teachers and readers of all types – in shared support of the freedom to seek and to express ideas, even those some consider unorthodox or unpopular.

In July 2015, a Harris poll on attitudes about book banning and school libraries revealed that out of the 2,244 U.S. adults who participated, the percentage (28 percent) who felt that certain books should be banned increased by more than half since the previous survey (18 percent) conducted in 2011.

Book challenges recorded by ALA’s Office for Intellectual Freedom (OIF) reveal that attempts to remove materials with diverse content are higher than ever before.

The Top Ten Most Challenged Books of 2015 were:

4.      Beyond Magenta: Transgender Teens Speak Out, by Susan Kuklin

5.      The Curious Incident of the Dog in the Night-Time, by Mark Haddon

According to the Office for Intellectual Freedom, at least 46 of the “Radcliffe Publishing Course Top 100 Novels of the 20th Century” have been the target of ban attempts.
Examples:

To raise awareness of the overly restrictive blocking of legitimate, educational websites and academically useful social networking tools in schools and school libraries, the American Association of School Librarians (AASL), a division of ALA, has designated one day during Banned Books Week as Banned Websites Awareness Day. On Sept. 28, AASL asks school librarians and other educators to continue the discussion on how overly restrictive filtering affects student learning.

With more than 75 years of collective experience in fighting for free access to information, the ALA’s Office for Intellectual Freedom (OIF) collects reports from libraries, schools and the media regarding attempts to ban books in communities across the country. The OIF compiles and analyzes information to develop the ALA’s Top Ten List of Frequently Challenged Books, a list that is released annually to break the silence about attempts made to remove materials.

For a complete list of reasons and additional information and infographics regarding the 2015 Top Ten List of Most Challenged Books are available at http://bit.ly/americas-libraries