Yesterday: The Grove Theatre in China Grove in 1949 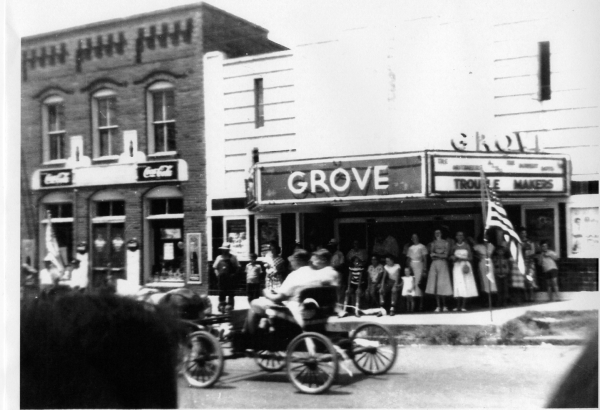 Bobby Mault provided to the Post this copy of a photograph showing the Grove Theatre in China Grove in August of 1949. It’s obvious people had gathered along Main Street to watch some kind of procession or parade on that particular day. According to  Mike Cline’s local movie website, “Mike Cline’s Then Playing,” the “Trouble Makers” was showing at the Grove Aug. 12 and 13 of 1949. The movie, which actually came out in 1948, starred Leo Gorcey, Huntz Hall & The Bowery Boys, and Helen Parrish. Mault, longtime service station owner and one of the founders of the Price of Freedom Museum, said he looked closely at the photograph and realized his sister and sister-in-law are in the crowd standing under the shade of the Grove’s marquee. Mault said he worked as a nighttime projectionist at the Grove when he was in high school. Jeff McCorkle gave him a capy of the photo.