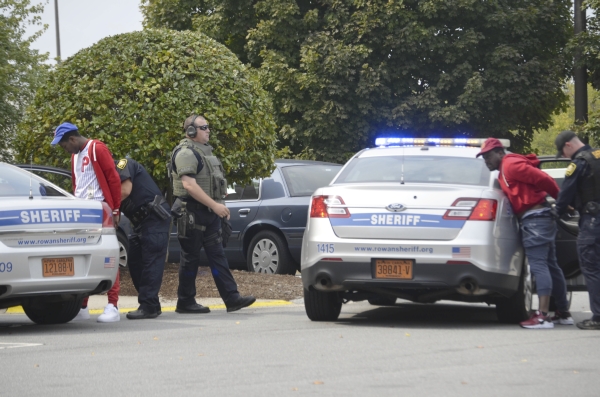 Salisbury Police, Rowan County Sheriff's Office and NC Highway Patrol responded to Hampton Inn, Klumac Road, after four men robbed T-Mobile. Two of the four men were involved in a near three-hour standoff with authorities. The hotel was evacuated while police swept the building and searched each room. Shavonne Walker/Salisbury Post

SALISBURY — Police have arrested four men in connection with an armed robbery this morning at a mobile phone store.

Two of the men were captured quickly, while it took nearly three hours to capture the other two while they hid inside Hampton Inn on Klumac Road.

Salisbury Police Chief Jerry Stokes said the men were armed when they robbed the T-Mobile store on East Innes Street, but investigators were still looking for the weapons following the arrests.

Officers intercepted two of the men almost immediately as they went inside the hotel.

One of the main priorities was to get guests out of the hotel safely, as well as the safety of the officers, Stokes said.

After taking two of the suspects into custody, police checked each room, then returned to the area where they had captured the two men to further search there.

In addition to the police, Rowan County Sheriff’s deputies were also on the perimeter of the hotel. The N.C. Highway Patrol was on the scene, aiding in the response. On standby were the Rowan County EMS and Salisbury City Fire Department. Salisbury Transit and Red Cross provided an air conditioned place for the guests to sit and provided water, respectively.

The police department’s special response team went inside the hotel and at one point officers returned outside to get gas masks. Officials said that was a precaution.

Suspects’ names and charges against them were not immediately available. Police Capt. Shelia Lingle said further details will be released later today.