Drummer has a winning beat for video contest 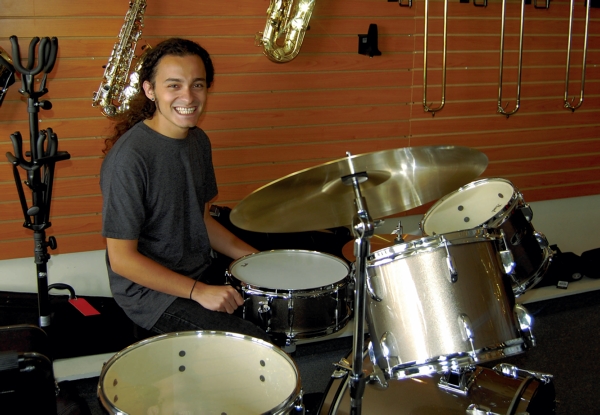 SPENCER — Ernie Nanetti-Palacios is a self-taught drummer. When he started to express an interest in drumming, his father, Luis Palacios, bought him drum practice pads and later a drum set.

Luis Palacios said he got used to the noise pretty quickly.

“Anything that’s creative is fantastic,” he said.

Nanetti-Palacios learned of The Band Attic’s video contest on Craig’s List and decided to enter.

Ernie Nanetti-Palacios, from Greensboro, ended up winning the contest.

The Band Attic, at 109 Fifth St., held its first Facebook video contest and gave away a new Pearl Roadshow five-piece kit to the winner on Thursday.

The contest officially started on July 15. The business asked for video submissions from local musicians for a chance at winning the drum kit.

The video with the most likes won the contest. About eight videos were submitted.

The contest was, in part, a way for the business to increase its Facebook presence.

The other reason for the contest was to do something nice for the community.

Tyler Howe, another co-owner of the store, said the business was started to provide a place for musicians to buy quality instruments at good prices. The business partners with the school system to provide students with instruments because they believe every student who wants to join band should be able to, no matter their household income.

Tyler Howe said it was nice to give someone a good drum kit.

“We wanted to showcase the talent in the Carolinas,” he said.

Mike Zurlo, a sales representative for Pearl, was able to stop by and present the kit to Nanetti-Palacios on Thursday. He said he usually travels around the state to different stores and dealers and the stop coordinated with his schedule.

Zurlo said the contest was a good way to advertise the business.

“It’s a great idea to get the word out on The Band Attic,” he said.

Nanetti-Palacios submitted a video that he and his brother recorded for fun last Christmas. In the video, he plays the drums while bobbing along to the music in a Santa Claus hat.

Once the video was submitted, Nanetti-Palacios and his family worked through their network of friends and extended family to get as many likes as possible.

Nanetti-Palacios said he started getting a little nervous once more entries were submitted, but when he won he was “over the moon.”

Nanetti-Palacios said he was grateful to The Band Attic and Pearl for the chance to win the new drum kit. He said the win was motivation and the new kit will help his music career.

“This, I hope, will increase the quality of the music I make,” he said.