Spoiled, persnickety and devilish pets ‘paws’ to be blessed 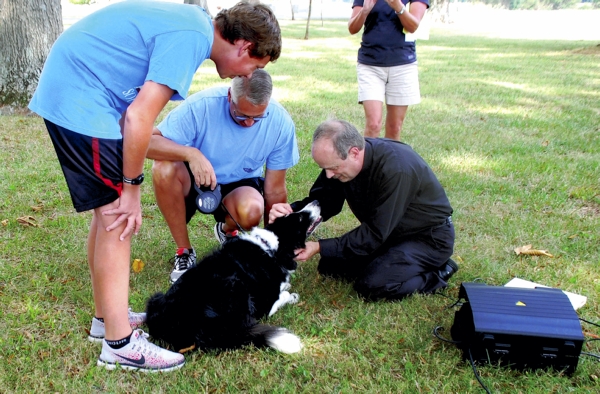 Mark Wineka/Salisbury Post David and Mark Parrish stand by as their prized border collie, Oreo, is blessed by the Rev. Scott Swix.

MOUNT ULLA — If you took a roll call of the six dogs at Sunday’s blessing of the animals at St. Luke’s Lutheran Church, you would count Snickers, Snuggles, Sushi, Mochi and two Oreos.

Several food names, it seemed. Amanda Cutler explained that one of her two corgis, Sushi, was named that because as a pup, “He looked like a sushi roll.”

In the grove of tall trees in front of St. Luke’s Sunday afternoon, the Rev. Scott Swix held a brief leader-and-response service with Scripture and prayer blended in. Then he invited the dogs and their owners to walk up for an individual blessing of each animal.

As soon as Snickers, a candy bar-colored Yorkie, reached Swix, he flopped over on his back and waited for a tummy rub.

That’s the way to be blessed.

“This is God’s work,” said a smiling Swix.

Neely Mowry said her white chihuahua, Snuggles, is a great companion, and “I couldn’t do without her.”

“She can be persnickety,”  Mowry added quickly. “She can be a fireball when she wants to be.”

The blessing of animals is most often done around this time of year in connection with St. Francis of Assisi, who died Oct. 3, 1226. So it’s quite a time-honored tradition.

As Swix tells it, St. Francis loved the larks and preached of God’s love of the birds in the trees. He also wrote an ode to all living livings and once, Swix said, Francis and his brothers displaced themselves from a hovel in favor of a donkey.

Swix held a separate service after the dogs for all other “critters.” It ended up being two cats: Burton and Sasha.

“She has a little bit of a devil in her, and I was hoping we could exorcise it,” Sasha’s owner, Robin Hampton, said.

Hampton’s farm includes sheep, donkeys, chickens, geese and cows. She acknowledged she wished all could be blessed, but the cat made the guest appearance for the farm.

Burton, a black cat, is actually a resident of Durham. His owner, Nate Lytle, was paying a weekend visit to his mother, Marian, and they decided a blessing of Burton couldn’t hurt.

Cutler’s two corgis, Sushi and Mochi, have their little scraps with each other at times, but otherwise, they are good buddies.

A blessing for her dogs was partly in order because Amanda and her husband have just moved into a new house, and the dogs have been going through an adjustment period. But beyond that, Cutler thought it was just important for her pets to be blessed.

“I think everything needs to be blessed occasionally,” she said. “They’re like my children, and I want them to have everything in life.”

Snickers, the Yorkie owned by the Perrell family, also has the good life at home.

David Parrish and his dad, Mark, brought their border collie Oreo to the blessing.

“He’s smarter than I am,” Mark  said of their prized dog.

Jayden Kerr also brought his dog Oreo. When she’s close to me, I call her ‘Orrie,'” Jayden said. When she runs away, Jayden calls her “Oreo.” The youngster thought a blessing for his young pup might be good because he worries about her whenever she does run away.

Sunday’s blessing of the animals went off without too much drama. There was a little bit of growling between the dogs, but not much. Snickers unceremoniously took a dump or two before the service, but the Perrells were prepared with their plastic bags.

She already has two future names picked out: Reuben and Bojangles.

Yesterday: The Grove Theatre in China Grove in 1949