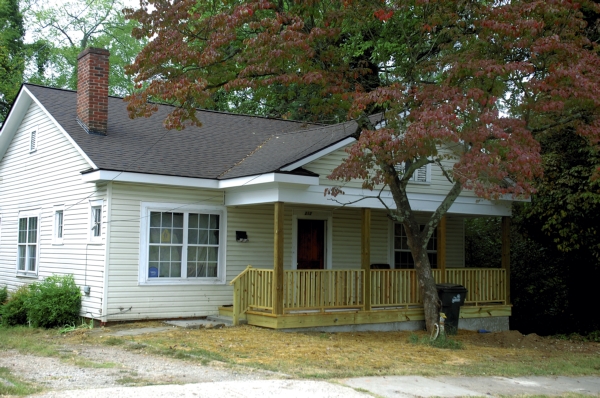 Mark Wineka/Salisbury Post This is the residence at 212 E. 11th St., Salisbury, where April Cora-Lucille Hall, 40, of Spencer was found outside of early Saturday morning suffering from a gunshot wound. Hall died Saturday evening at Wake Forest Baptist Medical Center in Winston-Salem.

SALISBURY — It all happened within a 10-minute time frame early Saturday morning.

April Hall had driven her mo-ped from Eighth Street in Spencer to 212 E. 11th St., Salisbury — a place into which she and Melissa Cross were in the process of moving back.

Still over at the Spencer house, Cross called Hall at 1:01 a.m. The phone picked up, Cross heard a rustling sound and then there was nothing.

By 1:11 a.m., Cross had arrived at the 11th Street house and was calling for an ambulance. Her “soulmate” sister-in-law was lying in the front yard, wounded by a gunshot.

April Cora-Lucille Hall, 38, died at 9:22 p.m. Saturday at Wake Forest Baptist Medical Center in Winston-Salem. She had been airlifted there earlier in the day from Novant Health Rowan Medical Center.

“It looked like she was getting off her mo-ped when it happened,” Cross said Sunday evening.

Salisbury Police issued no updates Sunday on their investigation into the homicide. Anyone with information is being asked to contact the department at 704-636-5333, or Crime Stoppers at 1-866-639-5245.

Cross and others who knew Hall said that though she battled a lot of adversity in her life, Hall was good-hearted, loved her two children (ages 20 and 17 and living in Fayetteville) and was like a kid herself.

Hall was physically and mentally disabled, Cross said. She drew $700 a month in disability and had never been able to work. She had several scrapes with the law, according to records with the Department of Corrections.

“If you knew April, because of her disability, she was like a 10-year-old,” Cross said. “She was a kid. … She would walk into a room and make you smile.”

Hall’s friends and family say Whitley’s Funeral Home in Kannapolis already is accepting donations to pay for her funeral.

“You’re talking about a girl who practically had nothing,” Cross said.

Complicating the funeral arrangements are efforts to allow several family members who are incarcerated to leave prison to attend the service.

Cross said she has “people coming out of the woodwork wanting to come to this funeral.”

Meanwhile, Cross also is planning a candlelight vigil for Hall Friday evening at the house at 212 E. 11th St. It was a rental house they shared, and it was damaged heavily by a tree that fell on the residence in a July storm.

The women had been living in Spencer while the Salisbury house was being repaired. Cross said they were moving things back and hoped to be completely moved in by next weekend.

Trishia Bassett said Hall had a childlike mind, was fun-loving and free-spirited. She loved to play with kids, and “My kids are going to miss her,” Bassett said. “They are very upset.”

Tony Hall, a 12-year-old nephew, said of his aunt, “She always was a fun person to be around.”

Bassett said Hall’s death was a shock. “Nobody believed it, because everybody had just been on the phone with her that very same night,” Bassett said.

Bassett said Hall loved the Lord and had prayed with her mother on the phone Friday night.

“April was a good woman who loved everyone,” Flake Angel said. “There was never a dull moment when she was around.”

Angel said Hall loved Cross with all her heart and that her big family — she was the youngest of 10 children — will miss her very much.

“She didn’t deserve what happened to her, and we all hope she gets justice,” Angel said.

Spoiled, persnickety and devilish pets ‘paws’ to be blessed