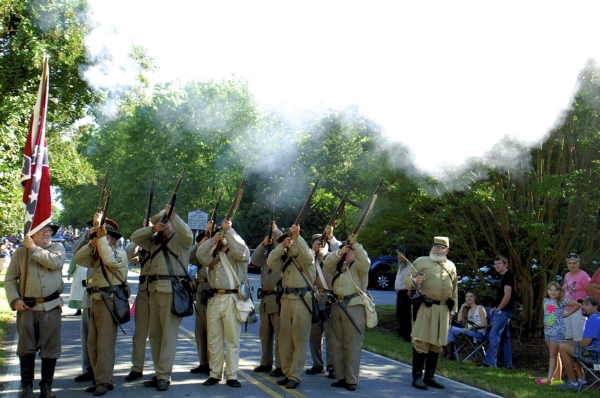 Mark Wineka/Salisbury Post Smoke rises from the fired rifles of a company of Civil War reenactors who marched in the Gold Hill Founders' Day Parade.

GOLD HILL — When you’re a young boy, life is pretty simple. You grab a soft drink, find a comfortable seat against an old lamp post and you wait for the parade to start.

That’s what 6-year-old Brody King of Kannapolis was doing Saturday morning as he and his grandmother, Sue King, found a good spot to watch the Gold Hill Founders’ Day Parade.

“This place is like a hidden gem,” Sue King said of Gold Hill, describing how she loves the Gold Hill Mines Historic Park, the village and places such as the old Jail and Assay Office. And both grandmother and grandson had been counting the days up to the parade.

“We were waiting and waiting for this,” Sue King said.

Several thousand people attended the 27th annual Gold Hill Founders’ Day. Besides its traditional country-flavored parade, which kicked things off in the mid morning, the day included six country and bluegrass band performances, besides an all-afternoon open jam at the Log Barn.

The Log Barn also was the site for a Civil War living history encampment of the 63rd N.C. Troops, which provided a live skirmish at the end of the day. There were afternoon “history hayrides” to the Gold Hill Pond and Powder House, besides a plethora of exhibits and vendors in the park.

Founders’ Day organizers also scattered more than a hundred “gold nuggets” throughout the grounds, which kids could redeem for small gifts at the Gold Hill Historic Foundation booth near the Jail.

The day included a short ceremony at the Amphitheater late in the morning, when Dr. Kevin Cherry, deputy secretary for the N.C. Office of Archives and History, presented copies of an 1884 map of the Gold Hill Mining District to Calvin Welch, Vivian Hopkins, Aaron Kepley and Steve Poteat.

Just last year, Welch had donated the original hand-drawn map by Joseph J. Newman to the state archives. Since then state conservator Emily Raintree in Raleigh had been meticulously restoring the map, whose ink was quickly fading. Insects also had been eating away at the document, and it had incurred water damage  at some time in its history.

“He got it to our conservator right before it turned to dust,” Cherry said of Welch.

The restored original will now be kept in the dark, in a humidity-controlled vault in the state archives, Cherry said. But Cherry traveled to Gold Hill with several full-sized copies of the original, “because our department works for you,” he told the crowd.

“We take care of your treasures.,” he added.

The copies went to Welch, whose family preserved the original all these years; Hopkins of the Gold Hill Foundation, who helped bring Welch and the state together; Aaron Kepley, executive director of the Rowan Museum; and Steve Poteat, who helped in providing additional information related to the map.

A copy also will be going to the Rowan Public Library, Cherry said, and the N.C. Office of Archives and History will soon have a copy available for public inspection on its website. It all would not have been possible without Welch and his family, Cherry said.

“What the thrill is to me,” Welch said later, “is that it is saved, and my granddaddy had the foresight to save it.”

Poteat said Newman, a mining engineer from the North who came to Gold Hill about 1879, was a good man and not the cheat and scoundrel his brother, Walter George Newman, would become.

Joseph Newman started the Dutch Creek Mine around the Liberty area. Poteat said three of the maps were made, but the one Welch’s family had in its possession all these years seems to be the only one left.

Poteat found reference of intentions to make the map “to locate all the mineral bearing veins and placer deposits” in an Oct. 26, 1882, article of the Carolina Watchman newspaper in Salisbury.

A Nov. 8, 1883, Carolina Watchman story reported that ” J.J. Newman, of Dutch Creek Mine, is now engaged in making a map of all the mineral properties north of Gold Hill to the Yadkin River.”

Then in a Feb. 28, 1884, story, the Watchman reported that “Mr. J.J. Newman has finished a map of Morgan, Gold Hill, Providence and part of Litaker and Salisbury Townships, giving the Physiograpy, Geology and Topography of the section.”

Newman would later commit suicide, Poteat said. His suicide note is in the History Room of Rowan Public Library “and it will break your heart,” Poteat said.

“This was a good man, he really was,” he added of Newman.

A few entrants, such as the “Boogerbusters” from Booger Woods and the Body Snatchers Haunted Trail, did their best in trying to get people thinking about the next big holiday — Halloween.

Darius Hedrick, who played probably the biggest role in moving buildings here one by one and transforming Gold Hill into the “hidden gem” Sue King talked about, said it is “the best parade in Rowan County, or at least in Gold Hill.”

The whole Gold Hill Village renaissance started in 1989, Hedrick said, when he came back to his parents’ old house and  simply made the place look better by mowing and weeding. Hurricane Hugo hit soon after, and there was even more cleanup required everywhere.

“Then we just started moving forward a bit at a time,” Hedrick said, giving credit to many others. “… One thing that happened was that once people had something nice to look at, they wanted to clean up their own mess.

“Gold Hill has some very interesting people, very smart people. It didn’t take much of a jumpstart to get people going.”

Mount Pleasant residents Sharon and Dan Harwood came to Founders’ Day for the first time Saturday and also took in their first Gold Hill parade. But it wasn’t their first time to Gold Hill.

“We come up here for the bluegrass,” Dan said. Every Friday night, Hopkins’ 1840 Montgomery Store has a bluegrass jam session.

“It amazes me the talent they draw into that store,” Dan added.