Cavaliers beat West Stokes to get back on track 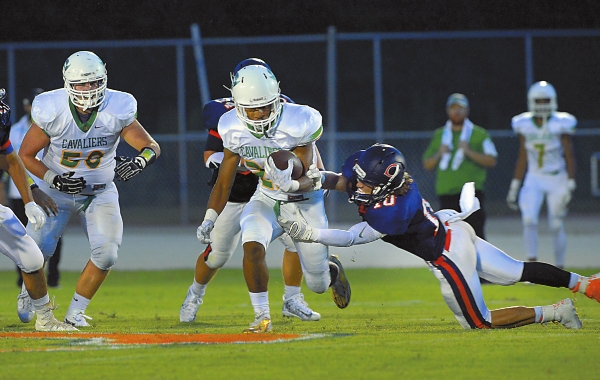 SPENCER — In his last two games, West Stokes running back Devan Hairston had amassed 555 rushing yards and eight touchdowns. Friday night at Eagle Stadium, Hairston and his Wildcat teammates were introduced to Zion DeBose, Chaz McCombs and the rest of the North Rowan defensive front. It was not a pleasant introduction.

The result was an overwhelming 32-7 win for the Cavaliers (4-2) as they came off a miserable loss the week before at South Iredell and snapped a two-game losing skid.

There were offensive highlights for sure as quarterback Corbin Smith threw for 191 yards and a pair of touchdown passes to receiver Deandre Gray, then speedy Jayden Jones iced the game in the fourth quarter with a 69-yard scoring sprint around right end. But the night really belonged to the defense as the Cavaliers slammed the door on the Wildcats (4-2) right from the beginning  and never let up.

The North defense focused on the 6-3, 215-pound senior Hairston holding him to just 15 yards on 10 carries, plus a 34-yard gain on a screen pass, well below his normal 20-plus carries and 250-plus yards per game. His night ended prematurely with a neck injury in the third period bu  the damage had been done by then.

“He (Hairston) was definitely their workhorse,” North Coach Ben Hampton said. “But we felt like if we could key on him we could force them to depend more on the pass and we liked our chances then.”

With DeBose, McCombs, Matthew Hoover and company putting on a relentless rush, North held the Wildcats to a negative nine yards of offense in the first half and only 105 yards of total offense for the game. Senior quarterback Reid Fulk was sacked 7 times by the Cavaliers defense resulting in a remarkable minus 50 yards of rushing.

DeBose, the 6-3, 230-pound defensive end, notched two of those sacks, a number of hurries and numerous tackles for loss or no gain. His brightest moment came last in the opening quarter when a snap sailed well over Fulk’s head and DeBose scooped the ball up and ran 25 yards for the defensive score. That made the score 14-0 and North never really felt threatened after that.

“That’s what I do,” DeBose said of his effort. “I come out here every day with my brothers and we prepare to go to battle. It is a team game and we had a good effort tonight. We have everything back on track now.”

Hampton was in total agreement that his defense was the difference in this win. “We could have played better on offense but our defense just did what they do.” he said. “When our front four (on defense) goes off like that they are really tough to block.”

On the offensive side, North relied primarily on the passing accuracy of Smith who completed 16 of 27 tosses with one interception. He spread it around to five different receivers with Desmond Gray grabbing eight for 84 yards and Deandre Gray catching 5 for 65 yards and his two scores.

“We definitely turned it on tonight after the past two weeks,” said Smith a 6-2,  170-pound senior. “As soon as I came into the locker room this afternoon I felt a good attitude come over me. I knew from that, it was going to be a good night for us.”

Smith and the Cavs opened the game with a quick 45-yard drive for a 7-0 lead as he hit Deandre Gray on a curl-in down the right side for a 20-yard score. DeBose added his fumble recovery touchdown later in the first period then kicker Jacob Young made it 17-0 at the half with a 23-yard field goal.

The Wildcats showed their only sign of offensive life as the second half opened when Fulk connected on four passes for 79 yards in one drive to get on the board. The scoring play was a 24-yard slant route to receiver Landon Wilkins from 24 yards out.

On the next series however, Hairston was injured and taken to the hospital for precautions with neck tenderness. “He is our best player on offense and defense, ” said West Stokes coach Jimmy Upchurch. “I knew when he went down we would struggle but I think he is going to be OK.” The Wildcats have a bye week coming up to heal their wounds.

North put the game away early in the final quarter when they converted a clutch fourth down play at the Wildcat 14. Smith found Gray once again with a swing pass at the five and he juked his way into the end zone for a 24-7 margin. With just over four minutes left, Jones put the cherry on top when he caught the edge on a sweep and raced 69 yards for the score. A two-point conversion run by Dalynn Cuthbertson made the final 32-7.

The Cavaliers now head into Central Carolina’s Conference play next week with a tough opener at Lexington High. “It will be athlete versus athlete so we had better be ready,” Hampton said.