‘We are all crying:’ Catawba students hold silent protest to support Charlotte 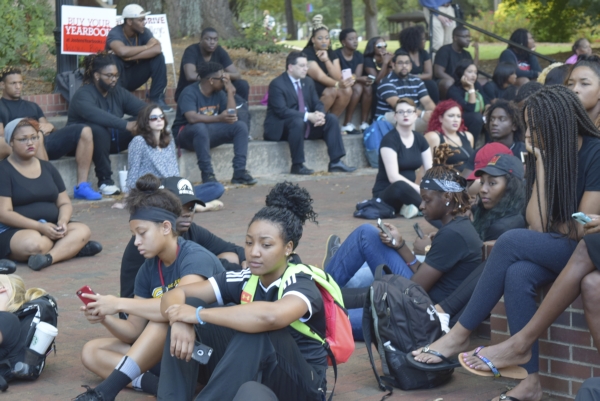 Catawba students sit on the ground in silent protest, expressing their unity as a campus and their support for the people of Charlotte. Many students at Catawba College are from the Charlotte area, and have been shocked and grieved by recent violence. Rebecca Rider/Salisbury Post

SALISBURY —  On Friday afternoon, there’s a refrain drifting over the brick plaza in front of Catawba’s student center. Students, many wearing black, cluster around, singing together.

It’s the heart of the message that Catawba students tried to share Friday with a peaceful demonstration on campus. While the protest itself was silent, before and after the event students sang their thoughts. They smiled, but many wiped away tears, as well.

Jerrin Morrison, a student at Catawba, said watching the violence in Charlotte unfold on live TV has resulted in a rocky week.

“It seems surreal until it finally hits your hometown,” he said.

Catawba pulls a large number of students from the Charlotte area, and like Morrison, many have been struggling to deal with the events that followed the fatal Tuesday shooting of Keith Lamont Scott by a police officer in Charlotte.

“We are all crying right now,” he said.

As the interstate was shut down by protesters and violence began overlapping vigils, Morrison said he wanted to do something for other students who, like himself, call Charlotte home.

Thursday, Morrison took to social media, garnering support from professors, the student body and the campus Black Student Union, of which he is a member.

On Friday afternoon, Morrison, the union and more than 50 students, faculty and staff met at the plaza in front of Catawba’s student center for a silent protest to express their grief and to stand in solidarity with one another. Organizers made it clear that the protest was not associated with the Black Lives Matter movement.

Morrison said he wanted the protest to draw the student body together, regardless of color or creed.

“We, as Catawba College, care,” he said, “We are hurting, we want to help, we love everyone the same way.”

For ten minutes, students sat or lay on the ground in absolute silence. Some held up cellphones to record the moment, or gathered in small groups to pray. Many students wore black — a trend started by the NAACP, Alexis Beverly, president of Catawba’s Black Student Union, said.

“Nothing like this has ever happened so close to our campus . . . it hits close to home for a lot of students,” Beverly said.

The union will continue to wear black every Friday to show its support for Charlotte, Beverly said.

Morrison said that he and other student organizers felt like silence was the best way to express their point.

“With verbal communication there can sometimes come violence and adversity,” he said, “and we want to avoid that.”

Catawba is small, Beverly said, but the student population is aware of what happens beyond the school campus, and is aware of its role in the community — and students want the world to know that they care.

To Beverly’s, and other student’s, knowledge this is the first time such a protest has been held at Catawba.

The protest was timed for 1:45 p.m., when several classes at Catawba let out. Students participating were asked to sit on the brick of the plaza.

Events coordinator for the Black Student Union Destiny Stone said that she believed the protest showed unity and solidarity between all races. Catawba is a diverse campus, but the protest allowed everyone to come together as a single body — as Catawba.

“I feel like this is a step in the right direction,” union member Jalil Pack said.

Afterwards, students lingered to talk or share a hug. Several students began leading what remained of the crowd in songs.

The peaceful demonstration proceeded with the blessing of the school, and Catawba College President Brien Lewis — and Salisbury Mayor Karen Alexander — attended. Lewis said he was proud of students for expressing their concerns in a positive and constructive way.

Roslyn Perkins, vice-president of the union, said she thought the day was memorable to all who attended.

“I’m never going to forget this,” she said.