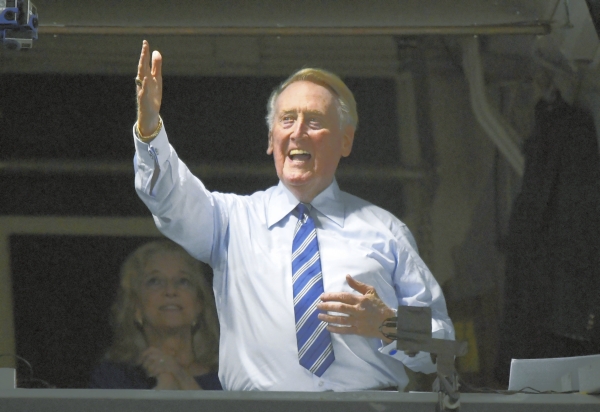 AP Photo/Mark J. Terrill ... Hall of fame broadcaster Vin Scully acknowledges fans prior to a game between the Los Angeles Dodgers and the San Francisco Giants, on Tuesday. Now 88, Scully is heading into his final week behind the mic at Dodger Stadium before concluding his career on Oct. 2 in San Francisco. His 67 years with the Dodgers make Scully the longest-tenured broadcaster with a single team in professional sports. “I will miss it,” he said Monday. “I know that dramatically.”

Soundtrack for a life — Growing up with Vin Scully

It was in the middle of the Barry Bonds home run chase, and I was sitting with Vin Scully in the broadcast booth at Dodger Stadium.

The Dodgers were playing the Giants, and Vin had been kind enough to agree to an interview before the game. I was writing a column about his views on Bonds, though the conversation would eventually cover everything from his days at Fordham to Willie Mays.

First, though, I had a confession to make.

“I was one of those kids with the transistor radio,” I told him. “Under the pillow at night, listening to the game.”

I don’t remember what Vin said in response, but I’m sure it was gracious because Vin Scully is nothing if not gracious. It’s simply in his DNA, and has been since he was a kid growing up in New York.

Yes, he had probably heard the same thing a thousand times before. Somehow, though, I still had to tell him how much it meant.

His voice has been part of the soundtrack of my life for so long I can’t remember ever being without it. His presence on the radio every spring was always a reminder that while everything changes, this never did.

It changes now, for reasons as ancient as mankind. We all get old, and Vin is no exception, even if he has weathered the ravages of time well. He’s still remarkable at age 88, but wants to get out before people start whispering about his age.

His last game after 67 years calling the Dodgers will be in San Francisco. Fittingly enough it’s on the 80th anniversary of when he was walking home from grammar school, and saw in the window of a Chinese laundry that the Giants had been beaten by the Yankees in the World Series.

I’ve considered him a friend for the better part of a half century, even though before that day we had never met. Our friendship was always a bit one-sided, with Vin in front of the microphone and me listening wherever I could.

It pains me that he’s walking away after 67 years. Not just because I’ll miss him, but because there is a sobering realization that there simply isn’t any more.

No more Vinny to greet us wherever we may be on a beautiful night from Dodger Stadium. No more descriptions of how glorious the mountains beyond Dodger Stadium look in the fading sunlight from his perch behind home plate.

No more seamlessly weaving stories in between pitches about players or things you didn’t know.

I’m hardly alone. If anything, I’m just one of many in a loosely formed community that calls Vinny their own.

And we all have our own stories to tell about the hours listening to his soothing voice.

It could have been any summer evening at Dodger Stadium. Often it was a nondescript game somehow made interesting in the way only Vinny could.

My favorites were from the 1960s Dodgers of my youth when any ball hit out of the infield was thought of as an offensive explosion. On the rare occasion there would be a Dodger home run, and Vinny would match it with a call.

“A way back, she is gone!!!” Vinny would call out, drawing out the words for added dramatic effect.

I knew him while riding in my dad’s car from my first baseball game in the L.A. Coliseum. I knew him on an elementary school playground, transistor radio to my ear, as Sandy Koufax mowed down the Yankees in the opening game of the 1963 World Series.

I knew him on a June evening in 1968 when Don Drysdale set a scoreless streak of 58 2/3 innings. Two days earlier, Robert Kennedy had been assassinated just a mile or two away after winning the California presidential primary and the world seemed to be falling apart.

Somehow, Vinny brought a bit of comfort, just like he did on so many nights with the little red radio under my pillow and his voice taking me to places both near and far away.

“Hi everybody and a very pleasant evening to you wherever you may be,” he would greet me, and I was pretty sure he was talking just to me.

My two sons are grown now but they have similar memories because Vinny was always on in our house or in our cars. They grew to love him too, and there’s not too many summer days that go by without a call or a text from one of them about Vinny telling the history of beards during a game or describing how the Beatles escaped Dodger Stadium in an ambulance after they played there.

Vin made calls that will live in baseball history. He memorialized Henry Aaron’s home run to pass Babe Ruth and Kirk Gibson’s home run to win Game 1 of the 1988 World Series.

He brought me into a Dodger Stadium one September night in 1965. At the time I’d never been to Dodger Stadium, but I could picture myself there when he called out the time on the scoreboard as Koufax was pitching a perfect game against the Cubs.

“I would think that the mound at Dodger Stadium right now is the loneliest place in the world,” he said in the ninth inning. “He is one out away from the promised land, and Harvey Kuenn is comin’ up.”

Vinny thought Koufax was the best pitcher ever, and on that we definitely agreed. He and I are also in agreement that Willie Mays is the best player we ever saw, though he actually saw Mays and I mostly only heard Vin describe the great things he did.

His final game at Dodger Stadium — where he has described nearly 5,000 games over the years — will be Sunday against the Rockies. Vin said this week that he hoped to focus on the game and not let his impending departure overshadow it, as if that’s possible.

Then it’s three final games in San Francisco. He’ll do those in typical Vinny style, trying not to draw undue attention to himself.

We’ll do the best we can to live without Vin, too. For some of us lucky enough to have been along for a lot of the ride it will be harder than others.

It was a few weeks after I first saw Vin that a hand addressed envelope came in the mail. Inside was a note from him thanking me for my nice words about him.

I’ve seen him several times since, but have never mentioned that my kids had it framed for me. It now hangs in a prominent spot on my office wall, and I make sure everyone who visits gets a look.

Even so, Vin Scully thanking me just doesn’t seem right.

Not with all that I have to thank him for.

Tim Dahlberg is a national sports columnist for The Associated Press and a Southern California native.

Cavaliers beat West Stokes to get back on track