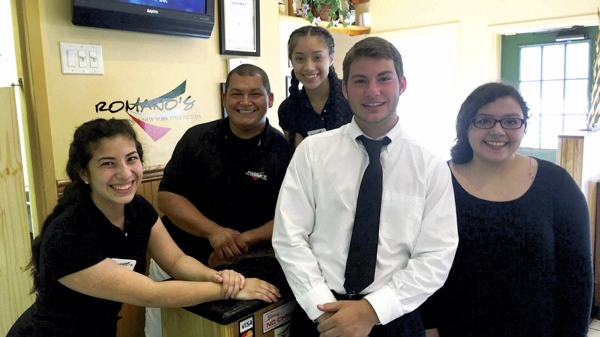 Submitted photo Fernando Portillo (2nd from left), owner of Romano's Italian Cuisine in Rockwell, said he was providing meals for a teen in need when the teen offered to mow the business's lawn. Since the teen was 15 and did not have a Youth Certificate of Employment, he was later given a citation by the N.C. Department of Labor for employing a minor. From left to right: Emily Avalos, Portillo, Alexis Avalos, Boyd McCall, Maribep Portillo.

ROCKWELL — Good intentions didn’t help a business owner avoid a citation from the N.C. Department of Labor for allowing a teenager to mow his business’s lawn.

Fernando Portillo, owner of Romano’s Italian Cuisine, said he had been feeding a teen who would often walk the streets around town. Portillo said it looked like the teen needed some help, so he gave him free lunches at the restaurant.

“I kind of put myself in his position,” Portillo said.

Portillo said he believed the teen may have been having problems at home.

Portillo was not the only one helping the teen. Other community members also provided him with food and sometimes money.

Back in July, Portillo gave the teen a sandwich to eat, as usual, when the teen asked if he could do something nice for Portillo in return. The teen offered to mow the lawn of the business with a lawnmower borrowed from a friend and Portillo agreed.

The teen was 15 and did not have a Youth Employment Certificate, also known as a work permit.

While the teen was mowing the lawn, the teen’s mother drove up and told Portillo she did not want her son performing that work.

She pulled into a nearby business and called the police. Portillo said the teen fled, afraid he would get in trouble, but he was able to find him and bring him back to the police. The police later found out that the lawn mower the teen used was stolen.

The police did not charge Portillo with anything, but the mother said she decided to call the N.C. Department of Labor.

The mother said her son had been recently hospitalized and should have been resting, not mowing a lawn in the hot July weather. The mother also said her son was on medication that restricted sun exposure.

The mother believed her son was working for Romano’s and other businesses in the area because the businesses were giving him food and he would come home with money.

She said she did not think a meal was proper payment for the work her son was doing.

“I think they were taking advantage of my son,” she said.

Portillo said he thought the teen was homeless. The mother said he was living at home at the time and left during the day.

Portillo ended up with a $105 citation from the Department of Labor after an investigator reviewed the situation.

In the eyes of the Department of Labor, because the teen mowed the lawn of a for-profit business, it was considered employment.

“We understand he was doing a good deed … but (the investigator is) looking at the law,” Dolores Quesenberry, director of communications for the Department of Labor, said.

Spokesperson Neal O’Briant said if the teen had mowed the grass without Portillo’s knowledge, it would have been a different story.

Quesenberry said private individuals can have minors mow their lawns, but minors doing work for businesses need to have a Youth Employment Certificate to make sure they are working in “safe environments during specific times,” Quesenberry said.

“If that teen had been injured, Mr. Portillo would be having a different conversation,” Quesenberry said.

Minors can get Youth Employment Certificates for free on the Department of Labor’s website: www.nclabor.com. The employer and a parent or guardian must sign the certificate.

Portillo said he wanted to fight the citation but he could not afford the lawyer’s retainer fee. He ended up paying the citation earlier this month.

The mother said she was just trying to protect her son.

Portillo said the teen was not under his employment and he feels like he was punished for trying to help someone in need.

“Why do they keep insisting that he was an employee when we were just trying to be nice?” he said.