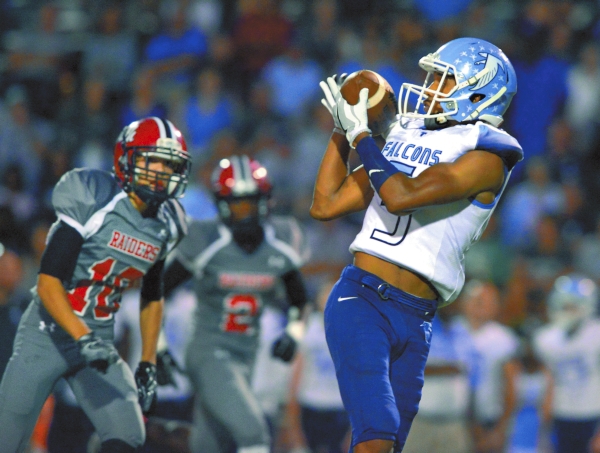 LANDIS — It took two plays for Kortez Weeks to break the West Rowan record for career receiving yards.
That was one more than some expected.
After Payne Stolsworth completed an 8-yard pass to Kameron Caldwell on West’s first snap, the Falcons looked deep on second-and-2. That’s when Weeks, running free toward the post, reeled in a 64-yard strike from Stolsworth and put West on the road to a 35-0 South Piedmont Conference victory at South Rowan.
“I went in motion, and then it was just a go route,” Weeks said. “We studied film, we knew that play should be there, and Payne and the offensive line executed. It was nice to get the record, and it was really nice to get it on a TD.”
Weeks surpassed Jon Crucitti’s school record for career catches last week at Northwest Cabarrus and now he’s the Falcon’s kingpin in a second category. Weeks has 122 career receptions for 1,991 yards. Both numbers rank sixth in county history, and he should have a lot more in front of him.
West (4-1, 3-0 SPC) is balanced on offense, and South (0-5, 0-3 SPC) had to try to take something away. The Raiders chose to bring a lot of bodies into the box against the run.
“South made a strong commitment to stop us from running the ball,” West coach Joe Nixon said. “We came in thinking we might have to take to the air and take chances early.”
South got one first down after Weeks’ TD, but a faked punt failed on fourth down, and West got the ball back at the South 24.
The Raiders stuffed West’s standout back Jovon Quarles for a loss on first down, but on second down, Quarles slipped out into the left flat, and Stolsworth led him perfectly. Quarles turned the corner with a head of steam and out-ran defenders to the end zone.
“That was something we hadn’t seen them do,” South coach Daniel Yow said. “You just have to give them credit for a really well-designed play.”
The key moments came in the second quarter when South still had a chance to make a game of it. South’s defense forced a punt and the Raiders got good field position at the South 47. The Raiders made a determined push behind the running of QB Austin Chrismon and running back Sayquan Anthony and had first-and-10 at the West 29.
On fourth-and-1 at the 20, South was flagged for illegal procedure when a back jumped early.
“That really hurt because Austin had broken that play to the outside,” Yow said. “I believe he would’ve scored.”
After the 5-yard penalty, Chrismon threw for the end zone on fourth-and-6, and West cornerback Paris Hillie made the breakup.
The game spun out of control for the Raiders shortly after that. Weeks made an 18-yard reception, and South’s defense had two face-mask penalties as the Falcons drove to make it 21-0. South’s Michael Gilbert made two tackles inside the 5, but on fourth-and-goal, Quarles found the end zone.
West got the ball back with 1:42 left in the half, and with everyone in the stadium knowing Weeks was the most dangerous guy on the field. Still, Weeks raced behind the Raiders again. Stolsworth got him the ball in stride for a 69-yard score, and the Falcons led 28-0 at the break.
“The same exact play as the first touchdown,” Weeks said.
Three of West’s first-half scoring “drives” had taken a total of five plays.
Yet it had been an odd half. While West owned a 28-0 lead, South had possessed the ball most of the half and had more first downs and more rushing yards.
“I challenged the offensive line at halftime because we really hadn’t gotten very many snaps,” Nixon said. “We were getting the ball first, and we wanted a good start to the second half.”
That start of the second half couldn’t have gone much better for the Falcons. Hillie took the kickoff to the South 48. On West’s first snap of the half, Quarles rumbled 23 yards to the South 25. On the next play, Quarles scooted to the end zone, and it was 35-0 just 24 seconds into the third quarter.
Quarles rushed for 105 yards and scored three TDs.
For South, Anthony battled for 72 rushing yards, while Chrismon fought for 48 net yards and completed two passes. But West, which didn’t turn the ball over, got interceptions from linebacker L.J. Robinson and cornerback Deyquan Byrd and a fumble recovery from Rodney Howell.
“We were glad we finally got a shutout because it’s been elusive,” Robinson said. “We had a great gameplan that was focused on stopping their quarterback. And credit our defensive linemen. They allowed the linebackers to run around and make plays.”
Robinson impressed Yow.
“We ran one isolation play at him,” Yow said. “He knocked down the blocker and tackled the running back. He’s a special player.”
South’s defense turned away West once after the Falcons got inside the 5-yard line. West also had the ball at the South 2 at the end of the game after Byrd’s near pick-six, but the Falcons weren’t looking to rub it in. They took knees twice.
“Our goal was to play a complete football game,” Nixon said. “We’re not there yet, but we took steps toward playing one tonight.”
South played in fits and flashes, matching West’s intensity but not West’s speed.
“Our effort was great and our attitude was great and I’m proud of those things,” Yow said. “But we’ve got to fix our execution. We’re stopping ourselves.”