Chowan passing attack too much for Livingstone 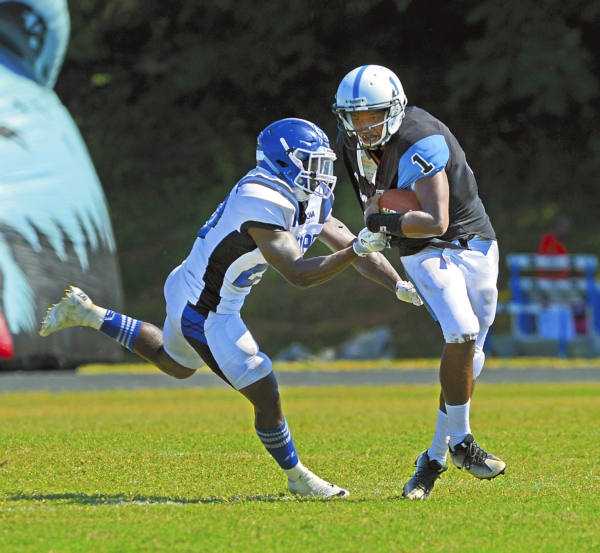 Fourteen of visiting Chowan’s 22 starters are upperclassmen, including senior quarterback Randall Dixon, who came out firing and didn’t let up until the Hawks had a big lead en route to a 41-13 CIAA victory.

Dixon, a 6-2, 230-pounder, completed 21 of 32 passes for 372 yards and five touchdowns. He had 355 yards passing through three quarters, a lot of it going to his senior counterpart Ryan Nolan.

“That’s my boy,” Dixon said of Nolan. “Actually, he’s my roommate and I gotta feed him. Nobody in the CIAA can cover him.”

Dixon connected with Tyrone Carter for a 65-yard strike on Chowan’s fourth play from scrimmage. Before halftime, Dixon hit Nolan and Torry Baker for scores and add a nine-yard TD run from Tyree Lee, and it was 27-0 at the break.

“My guys were open and I’ll take ’em over anybody,” added Dixon. “And my offensive line did a great job giving me time and I just let it fly.”

Longerbeam (6-2, 225 pounds), was hot and cold during his first outing, completing 14-of-23 passes for 138 yards and no interceptions, but he did have one of his team’s four lost fumbles. He also rushed for 74 yards, but due to losses, netted just 27 yards.

Despite falling behind so quickly and by so much, Livingstone (1-3, 0-1) was still in the game, as it amassed 237 yards rushing. But as was the case last week at Davidson, the Blue Bears spent the majority of the time in the middle of the field and drives were stopped by one bad play before reaching the red zone.

Two of the fumbles occurred on Chowan’s side of the field and freshman speedster Andrew Faraimo slipped behind the defense for what would have been a sure 68-yard TD pass, but he dropped it.

“We dropped an interception on their first play and we had four fumbles, a dropped touchdown pass and a missed field goal,” Williams lamented. “It’s just growing pains. We played better in the second half again but we just can’t get out of own way. Including myself, I think we’re trying too hard to make things happen. We just need to relax and play.

“Chowan has a good ball club,” continued Williams. “They didn’t drop a ball, but I’m a little disappointed on some of our coverages. You can’t let a receiver as good as No. 15 (Nolan) be running down the field wide open, but we’ve got a young secondary and we’ve just got to be patient.”

Chowan coach Tim Place was happy to get a win, especially since rain forced the Hawks to practice inside, leading up to the game.

“We had a very difficult week of practice,” said Place, now in his ninth year at Chowan. “We never got outside because of the rain we had in northeast North Carolina, so it was an odd week. But we’ve got to control the controllable and we did as good as we can.

“We beat a good Livingstone team,” continued Place. “We appreciate what the coaches are doing at here. They’re doing a heck of a job. It’s an honor to come here and get a win.”

Place said that Chowan’s game-plan was to have a balanced attack, but after halftime when Livingstone got more aggressive up front, he stayed with the pass.

“We’re going to do what the defense gives us,” Place said, “and after their halftime adjustments, it put us in a position where the only answer was to throw the ball.”

Livingstone junior running back Jarius Richardson broke through the line early in the third quarter and showed surprising speed as he beat all defenders for a 70-yard touchdown. Tyler Keene’s extra point cut the deficit to 27-7.

But the defense couldn’t hold and on the ensuing drive, the Hawks took just four plays to go 69 yards and pretty much put the game away. Dixon hit Herman Dupas for a 29-yard TD and it was 34-7.

“We have a strong defensive group and we usually hold a team to lesser yards, but we made a lot of mental mistakes today,” said Blue Bears’ senior safety Danny Robinson. “We’ve got to go back to the drawing board and figure it out. We still have a chance to pull it together, so we’ll figure it out.”

Both teams added a score in the fourth quarter, Livingstone’s coming on a one-yard run by Salisbury’s Justin Ruffin.

Richardson led all runners with 129 yards on the day. Livingstone’s leading receiver, Everett Ransom, had another solid day with six grabs for 82 yards.

“It was a good experience today, I just wished we had come out with the ‘W,'” said Longerbeam of his first collegiate start. “But we made a lot of simple mistakes and turnovers. We had a lot of good plays and a bunch of drive starters, but then the drives would stall out. We’re close, but we just have to learn how to finish.”

Livingstone travels next Saturday for a conference game at Virginia State. It’s sure to be tough test for Williams’ young squad.

“There were bright spots (Saturday),” said Williams. “The offensive line settled down and played in the second half and receivers caught the ball. And I was pleased with Longerbeam. He just needs to work on taking a deeper drop. There were several times that he didn’t give his OL a chance to protect him.”