Carson mistakes a factor in 39-6 loss to Robinson 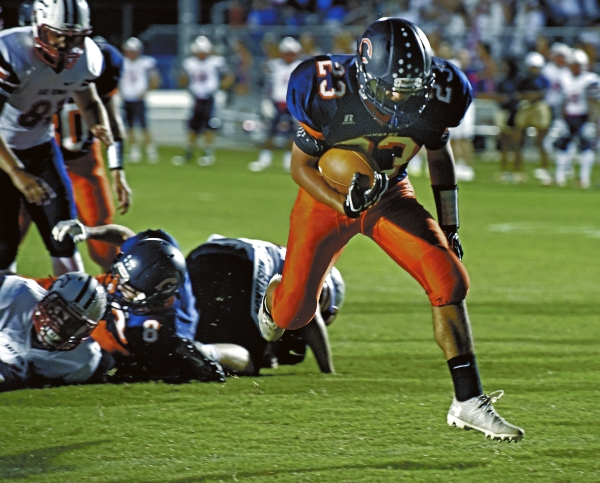 CONCORD — Joe Pinyan tried to say all the right things after Carson did all the wrong things Friday night.

The fifth-year Cougars’ coach felt like someone had just run over his dog — and he needed to talk about it — after a disheartening, 39-6 SPC loss at J.M. Robinson.

“I’m not the kind of guy that’s gonna give up because we played poorly,” he said after Carson (3-2, 2-1) had its three-game winning streak snapped. “If we had played our best and they’d beaten us that bad, I’d have to say, ‘Hmmm. Wait a minute.’ But we didn’t play well. They are a good team and we made them look better.”

Robinson (5-1, 4-1) entered the match ranked 10th in the state 3A poll, but no one expected the Bulldogs to use Carson as a chew toy.

“We knew it was going to be a challenge,” linebacker Blake Daniels said after Carson yielded 17 first downs and 373 total yards. “And at the beginning of the game we were fresh, we felt good. But it got to be too much for us at the end.”

It was a good game early on, particularly after Carson quarterback Owen White spiraled a picturesque 34-yard touchdown pass to James Kotkamp early in the second quarter that trimmed Robinson’s lead to 8-6. It capped a 9-play, 72-yard drive that had the Cougars thinking they belonged at the big kids’ table.

“It was anybody’s game,” Pinyan said. “We were all happy, thinking if we can move the ball like that we’re gonna be OK. We called a lot of the same plays the rest of the game, but they all stopped working. Everything that could go wrong did go wrong.”

“I don’t think we played Carson’s defense tonight,” said cornerback Brendan Westbrook. “We were a little too laid back. You can’t play that way against really good teams.”

Robinson was especially good in the second half, when its defense pitched a shutout and its offense put up two more touchdowns and Daniel Rivera’s 40-yard field goal. Carson, which punted eight times, was limited to 85 yards in the third and fourth quarters. Both White and backup QB Cole Sifford threw second-half interceptions and the Cougars lost a third-period fumble.

“This game reminded me a lot of the North Rowan game,” said White, referencing Carson’s season-opening, 45-3 embarrassment. “We ran the first two drives right and then it just stopped rolling. It was rough. I guess our minds weren’t all on the same page. It happens.”

White completed six of 11 passes for 71 yards, then made a highlight-reel 24-yard catch on a fourth-quarter throw by Sifford. He also had a 50-yard run in the final quarter nullified by a holding penalty.

“I’m sure it was (a penalty),” Pinyan said with a post-game shrug. “And we had another one that they picked up in the fourth quarter. There were tons of mistakes on our part.”

None of that bodes well for the Cougars, who face off against conference front-runners West Rowan next week and Concord on Oct. 14.

“After we lay our heads down tonight, I hope everyone forgets about this one,” White said. “Next week we’ve got to work harder.”

No one knows that better than Pinyan.

“Coming into the game we knew we had to be perfect,” he said. “And we were far from perfect. That’s not the kids’ fault, it’s my fault. I’ll get it fixed.”