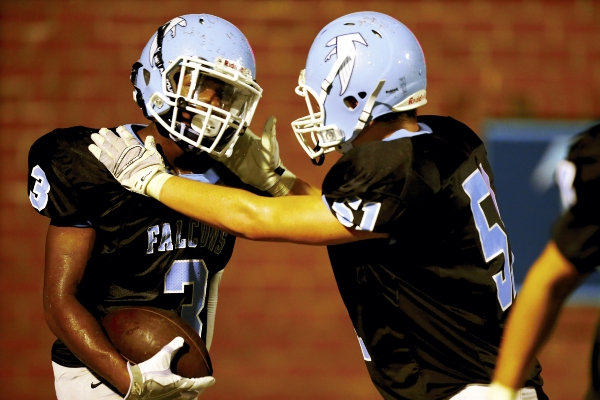 By Mike London
mike.london@salisburypost.com
Tonight’s matchups were played in soaking-wet weather last season. Look for better conditions this time.
The picks were 5-1 last week, which would be cause for celebration except that the miss was picking North Rowan to win a game the Cavaliers trailed, 20-0, before fans were settled in their seats and ultimately lost, 49-13.
Teams picked to win aren’t supposed to lose by 36, but I keep telling myself North played as badly as it possibly can and South Iredell played as well as it can.
The picks are 17-8 for the season and have been creeping toward respectability since that 1-3 effort in the opening week.
I don’t have a confident feeling about tonight’s picks because two teams are unknowns. I know more about the War of 1812 then I know about West Stokes and Surry Central.
Salisbury smacked around Surry Central last season, but the first rule of picking is not to pick a 1-4 team to go on the road and beat a 4-1 team.
Who knows about North Rowan? A few weeks ago, the Cavaliers looked like they might be the county’s best hope for a nice playoff run. Now they’ve got a two-game losing streak, including last Friday’s fiasco. Can they bounce back against a 4-1 West Stokes team that thumped them last season?
Davie’s defense has stood tall all season, and with its wounded offensive stars returning to the lineup, the War Eagles are a 95-percent lock to beat R.J. Reynolds at Deaton-Thompson Stadium as CPC play finally gets under way.
A.L. Brown always has handled North Meck. So this MECKA opener looks like a sure thing for the Wonders, but so did A.L. Brown-Mooresville, and we know how that one turned out.
Carson has a lot going for it. Three wins in a row and a 2-0 start in the South Piedmont Conference. Even coach Joe Pinyan admitted it’s been an “uplifting three weeks.”
Still, can the Cougars really win at Robinson? Robinson clobbered the Cougars in China Grove in 2015, and Robinson still has numerous very large people wearing burgundy and gold. On the road, Carson is the underdog in tonight’s marquee matchup.
As far as West Rowan at South Rowan, well, it’s a county game and a league game, so it means something, but there’s not a lot of suspense involved. South hasn’t beaten the Falcons since 2000.
East Rowan is off tonight.

Picks:
CARSON (3-1, 2-0 SPC) at ROBINSON (4-1, 3-1 SPC)
What happened in 2015: The game was moved up to Thursday and was played in wet conditions with disastrous results for Carson. Robinson whipped the Cougars, 28-6, and Carson QB Owen White received a concussion.
The series: Robinson leads, 3-2, and has won the last three. Carson’s most recent win against the Bulldogs came in 2010.
History: Carson outscored Robinson, 49-35, in that 2010 game behind four touchdowns and 242 rushing yards by Shaun “Bush” Warren.
Players to watch: Carson has to replace injured Cole Howard, who punted, kicked off and kicked field goals. Owen White will punt. Grayson Owens will handle kicks.
Quarterback Josh Dale, who guided Robinson’s victory against the Cougars in 2015, is still at the helm for the Bulldogs, and he’s good.
Notable: Robinson’s lone loss was by 21-19 to West Rowan in Mount Ulla. Carson lost badly to North Rowan in its opener but has won three straight.
Pick: Robinson 21, Carson 14

WEST ROWAN (3-1, 2-0 SPC) at SOUTH ROWAN (0-4, 0-2 SPC)
What happened in 2015: South led 6-0 in the second quarter on two Brennan Lambert field goals, but the stronger Falcons eventually took charge and won, 28-6.
The series: West leads 23-21-1. South led the series, 17-3-1, after the 1991 meeting and still held a 21-8-1 lead after winning in overtime in 2000. But the Falcons have won the last 15 meetings.
History: The schools played for the first time in 1961, the year South opened. The schools have met every year since 1989, although the series is likely to be interrupted in 2017 when South moves down to a 10-team 2A league.
South has competed with West the last two seasons after getting demolished, 65-7, in 2013.
Players to watch: West receiver Kortez Weeks is 8 yards shy of the school career receiving yardage record held by Jon Crucitti. QB Payne Stolsworth has thrown for 196 and 283 yards in his two weeks as a starter. South QB Austin Chrismon has supplied the bulk of South’s offense with his legs.
Notable: West cornerback Deyquan Byrd is tied for the county lead with three interceptions.
Pick: West 35, South 7

SALISBURY (1-4) at SURRY CENTRAL (4-1)
What happened in 2015: On the field, the Hornets forced six turnovers, dominated the second half and beat Surry Central, 31-6.
In the offseason, that was one of three wins the Hornets forfeited.
The series: Officially, it’s 1-1. Salisbury won a 2014 playoff meeting, 14-10.
History: Darius Jackson’s 70-yard fumble returned keyed the Hornets’ 2014 win over Surry Central’s Golden Eagles.
Players to watch: Salisbury’s best player is probably linebacker Tywun Rivens, who also might get some carries.
Notable: Surry Central won its first four games before being hammered, 42-7, by 1A power Mount Airy last week. Since taking care of South Rowan on opening night, the Hornets haven’t come close to a victory.
Pick: Surry Central 17, Salisbury 14

WEST STOKES (4-1) at NORTH ROWAN (3-2)
What happened in 2015: The game was moved up to Thursday in King because of weather fears. West Stokes had things under control by halftime and beat the Cavaliers, 35-17.
The series: North leads, 3-2. West Stokes has won the last two meetings.
History: The schools were Central Carolina Conference opponents from 2001-04. North won the games from 2001-03. In the 2003 game, North QB Sakelo Lilly passed for 284 yards and Lamont Savage had 165 receiving yards in a 39-6 romp.
Players to watch: North’s defense will be anxious to prove last week’s 49 points allowed were an aberration. North has a pair of receivers with 200-plus yards in Desmond Gray and Alonzo Sirleaf.
Notable: It’s the last non-conference game before North heads into CCC play. North’s CCC opener is at Lexington on Sept. 30.
North has lost two in a row. West Stokes has won three in a row but has not faced a tough schedule. Like Surry Central, West Stokes’ lone loss came against 1A power Mount Airy.

NORTH MECK (2-3, 0-0 MECKA) at A.L.BROWN (3-1, 0-0 MECKA)
What happened in 2015: The Wonders beat North Meck, 42-20, in Huntersville in bad weather. It was a win that made them 5-0. They got to 7-0 and were ranked No. 6 in 4A before losing to Hough.
The series: Wonders lead 3-0.
History: In the first meeting of the schools in 2013, Johnny Delahoussaey caught TD passes from Andrew Ramirez and Damon Johnson. Delahoussaey had 10 catches for 147 yards.
Players to watch: A.L. Brown running backs Shymere Scott and Jahia Mahatha have combined for 11 TDs. North Meck’s Emanuel Wilson, a 214-pound junior, has a staggering 624 rushing yards and nine TDs in the three games for which North Meck lists stats. He had 15 carries for 334 yards against Cox Mill.
Notable: North Meck’s season has been lose-win-lose-win-lose. The Wonders will try to hand them their first two-game losing streak.
Pick: A.L. Brown 34, North Meck 20

DAVIE COUNTY (4-1, 0-0 CPC) at R.J. REYNOLDS (1-4, 0-0 CPC)
What happened in 2015: It was close for a half, but Davie outscored the Demons, 35-0, in the second half and won, 55-14.
The series: Davie leads 20-13.
History: It was a tight, hotly contested series until recent years. Davie has won six straight, all by lopsided margins. The last win for the Demons was, 33-23, in 2009.
Players to watch: Davie QB Chris Reynolds and receiver Cooper Wall will be back in action after missing two weeks.
Notable: The game will be played at Deaton-Thompson Stadium in Winston-Salem. The “Thompson” in Deaton-Thompson is Salisbury native Homer Thompson, who became a coaching legend in Winston-Salem. Thompson was inducted posthumously as part of Parkland High’s first Hall of Fame class earlier this month. He already was a member of the Winston-Salem/Forsyth County, NCHSAA and Catawba halls of fame. He played football and baseball at Catawba.
Pick: Davie 38, R.J. Reynolds 14

PREP FOOTBALL: Carson’s Cole Sifford comes into his own