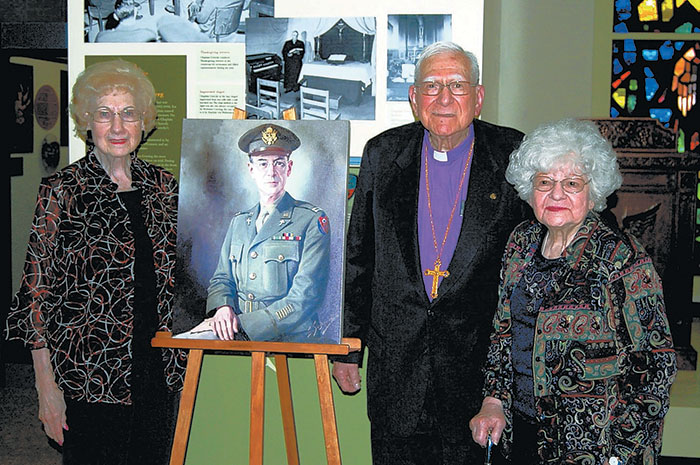 Submitted photo At the U.S. Army Chaplain Center and School Museum, Dr. Marjorie Matthews, the Rev. Carl Fisher and Roselyn Misenheimer pose with a portrait of their late father, the Rev. Roy L. Fisher. The siblings donated a German-language Bible to the Chaplain Center museum that had been a gift to their father and was signed by 17 Nazi defendants of the Nuremberg War Crime Trials.

As soon as the Rev. Roy L. Fisher received the German-language Bible signed by 17 Nazi defendants at the Nuremberg War Crime Trails, he recognized immediately how historically significant it might become.

Likewise, the importance of that Bible was never lost on Fisher’s surviving children. Fisher died in 1975, and the Bible passed on to his son, the Rev. Carl Fisher.

This past Monday, Fisher and his sisters, Dr. Marjorie Matthews and Roselyn Misenheimer, donated the historic Bible to the U.S. Army Chaplain Center and School Museum at Fort Jackson in Columbia, S.C.

Carl Fisher told the Post in August 2014 he always considered the Bible as belonging to his sisters as well. All three siblings were on hand for the formal presentation to the museum Monday.

Fisher is a Charlotte resident and retired Lutheran minister. Misenheimer taught in Granite Quarry schools for 34 years before retiring and now lives in Salisbury. Matthews is a retired family physician who resides in Pilot Mountain.

Another sibling, Jean Fisher Poole, was a well-known Salisbury teacher who died in August 1970 during an educational mission in Africa.

The Rev. Roy L. Fisher volunteered for the Army in 1942 after serving as a Lutheran pastor in Davidson County for many years. He took his chaplain’s training at Harvard University and ended up being sent to the European Theater during World War II.

Fisher served as chaplain in field hospitals throughout the Allied campaign in Europe, and after the war, the Army initially posted him at the 120th Station Hospital in Bayreuth, Germany.

A fellow chaplain, Henry Gerecke, eventually turned to Fisher for some help. Gerecke had been assigned as chaplain to the Nazis on trial in Nuremberg for war crimes.

This group of defendants and prisoners included Hermann Goring, commander-in-chief of the Luftwaffe and at one time Adolf Hitler’s hand-picked successor; Rudolph Hess, deputy Fuhrer until 1941, when he was captured by the British; and Albert Speer, Hitler’s war minister.

Out of 24 men originally indicted, 21 would stand trial.

Gerecke asked Fisher whether he could supply him with German-language Bibles for the defendants on trial at the Nuremberg Palace of Justice.

Fisher and his assistant, the Rev. James LaRue, delivered those Bibles to Gerecke on Nov. 30, 1945, 10 days after the “Trial of Major War Criminals” portion of the overall Nuremberg Trials began.

According to a book by Frederick Grossmith, “The Cross and the Swastika,” the Bibles came from Fisher’s home church in Rockwell — St. James Lutheran. Carl Fisher told the Post in 2014 if the Bibles themselves did not come from St. James, the money for the Bibles definitely was raised by the men’s group at the Rowan County church.

Roy Fisher and LaRue watched some of the trial’s proceedings after they made their delivery. Before they left for Bayreuth, Gerecke presented Fisher with one of the German-language Bibles signed by 17 of the men on trial.

It turns out, Roy Fisher’s wife, Ethel, and their four children — Carl, Marjorie, Roselyn and Jean — would join Fisher in Germany after the war, and the family would wind up in Nuremberg when Roy was assigned as chaplain to a hospital there.

They lived in the Nuremberg home of a former Nazi and attended an American school. In 2014, Carl Fisher recalled that 75 to 80 percent of the city seemed to have been destroyed by Allied bombings during the war.

On different occasions, each of the children was able to sit in on the Nuremberg trials. Their seats provided them with headphones offering them the English translation for the proceedings.

The Fisher family returned to the States in 1947 and settled in Rockwell. Meanwhile, Roy Fisher continued what became a 12-year career with the Army, and during the Korean War, all of the family except Roselyn would join him in Tokyo, Japan, for two years.

As for the Nuremberg defendants, all but three of the 21 were found guilty. A dozen received death sentences. Others were given prison sentences ranging from 10 years to life.

Hess received a life sentence; Speer, 20 years. Goring committed suicide the night before his scheduled execution. This most-publicized Nuremberg Trial, the subject of a movie starring Spencer Tracy, lasted from Nov. 20, 1945, to Oct. 1, 1946.

The Rev. Roy L. Fisher grew up on a farm near Rockwell and attended the Lutheran Theological Seminary in Columbia.

In the 2014 interview with the Post, Carl Fisher guessed he might someday give the Bible to the seminary in Columbia, but Monday’s gift to the U.S. Army Chaplain Center and School Museum fits well with his father’s longtime role as an Army chaplain.