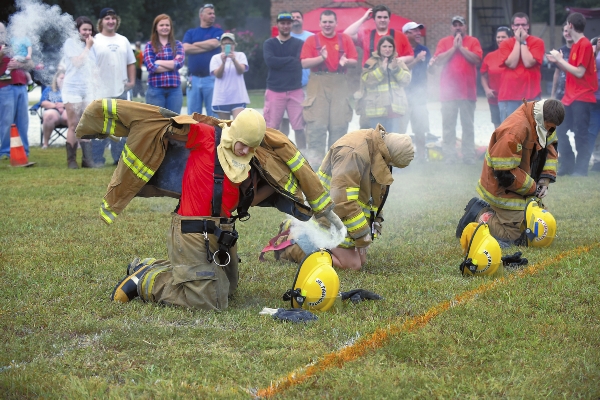 The teenagers competed in a number of events like the “firefighter’s challenge,” where a team of four tackles an obstacle course in full turnout gear. The “fly the Y” involves connecting three hoses, charging the line and hitting a target with the water. The “water ball” and the “tug ­o’ war” are two other fun events.

In the firefighter’s challenge event, Alex Piper had to dive on her stomach into a large pipe and crawl out the other end for her Kannapolis team effort. Miller Ferry team members Kennedy and John Petty pulled a 150-pound dummy over the finish line in a life-saving exercise while being timed.

During a couple of breaks in the competition, the team from Stony Hill Fire Department in Wake Forest got a line dance started to a country music tune on the PA system. They persuaded the Rowan County Fire Marshal Deborah Horne, who was running the events, to try her skill in the dance line.

The eight departments taking part in the competition were: Miller Ferry team that consisted of Miller Ferry and Union fire departments; Kannapolis Fire Department had a large team; The Cass County team from Texas had five members who traveled for three days packed in a pickup truck to the event; the Warren County from Warrenton, N.C., was led by Julian Green who is a 2004 Salisbury High graduate; Pine Ridge from Mt. Airy; Crawford from Crawford Township; Gaston County; and Stony Hill.