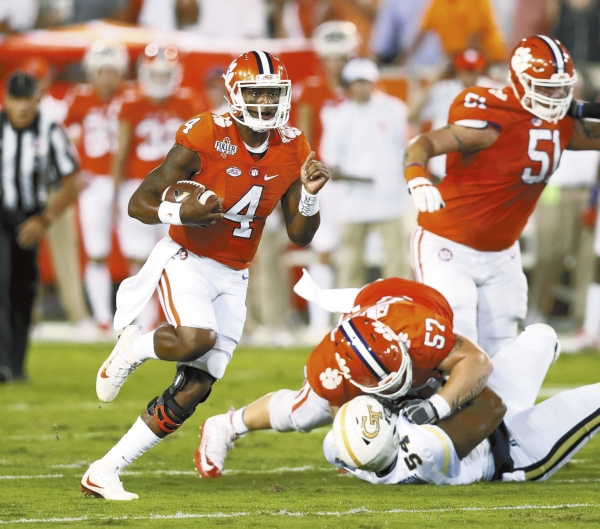 ATLANTA (AP) — Deshaun Watson and No. 5 Clemson finally turned in the performance everyone was expecting, totally dominating Georgia Tech in the first half on the way to a 26-7 victory Thursday night.

After sluggish wins over Auburn and Troy, and a practice-like rout of FCS school South Carolina State that meant nothing, the Tigers (4-0, 1-0 Atlantic Coast Conference) won at Georgia Tech for the first time since 2003 to set up a huge showdown with No. 3 Louisville.

Watson was 32 of 48 for 304 yards, including a 4-yard touchdown pass to Mike Williams and a 9-yarder to Jordan Leggett with just 4 seconds left before halftime to complete a stunningly lopsided showing that wasn’t entirely reflected in the 23-0 lead. Wayne Gallman added a 1-yard TD run.

Georgia Tech (3-1, 1-1) didn’t get into positive yards until early in the second quarter and the halftime stats were almost comical: Clemson held a 347-22 lead in yards, was up 19-3 in first downs, and ran 56 plays to only 21 for the home team.

The Yellow Jackets picked up one first down on a debatable pass interference penalty, another on a meaningless 14-yard run at the end of half. Clemson looked as though it was playing a lower-division school for the second week in a row, not its ACC opener.

This was a virtual repeat of last year’s meeting at Clemson, where the Tigers raced to a 33-10 halftime lead on the way to a 43-24 victory.

Clemson backed off over the final two quarters, and Georgia Tech managed to avoid its first home shutout since 1957 when Dedrick Mills scored on a 2-yard run with 13:21 remaining.

Even when Georgia Tech came up with a big play, it wound up costing points. Lance Austin intercepted a pass in the end zone and tried to bring it out — only to be whacked inadvertently by teammate Corey Griffin, knocking the ball loose.

Austin fell on it in the end zone, but that was a safety for Clemson.

There wouldn’t be an upset on this night.

Clemson: Don’t read too much into the sluggish showing in the second half. It was only natural that the Tigers let down a bit after dominating the first two quarters. For sure, this was just the sort of confidence-boosting performance that Clemson needed heading to their showdown with Louisville.

Georgia Tech: After opening with three straight wins over mediocre opposition, the Yellow Jackets don’t seem to have made much improvement over last year’s 3-9 debacle. Johnson’s triple-option offense was totally manhandled and increasingly looks like a gimmick that other teams have figured out. Poor recruiting seems to have caught up with the Yellow Jackets when they face elite competition.

After slipping a bit in the rankings off their first two wins, the Tigers should stay right where they are — maybe even move up a spot or two — when the Associated Press poll comes out next week.

Clemson: When Louisville visits Death Valley on Oct. 1, it will have all the makings of a national playoff game. Assuming the Cardinals (3-0) get by Appalachian State on Saturday night, two unbeaten powerhouses will meet to establish the pecking order atop the ACC.

Georgia Tech: No. 15 Miami (3-0) and longtime nemesis Mark Richt visit Bobby Dodd Stadium on Oct. 1. Richt is in his first season as the Hurricanes coach after 15 years at Georgia, where he went 13-2 against the Yellow Jackets.