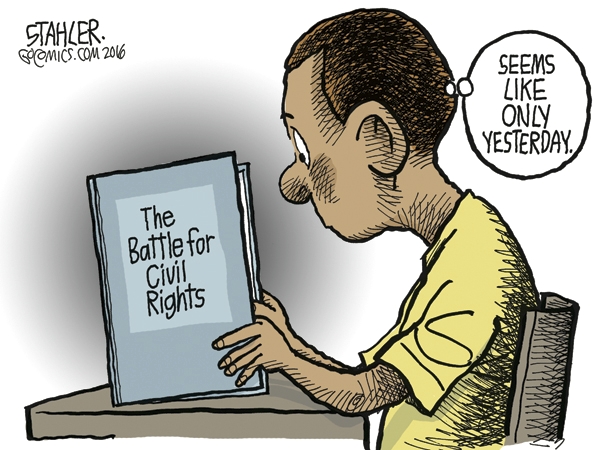 The Christians are as bad as ISIS. “Everyone must follow our beliefs.” Don’t you people read your own holy books? Matthew 6:5: “And when you pray, you must not be like the hypocrites. For they love to stand and pray in the synagogues and at the street corners, that they may be seen by others. Truly, I say to you, they have received their reward.”

If you need to pray before civil meetings, go right ahead, but do it privately, on your own time.

Not only do we read our holy book, we also know how to rightly interpret it. In Matthew 6:5, Jesus was not forbidding public prayer (there are ample exhortations and examples in scripture of acceptable public prayer). Rather, he was challenging the motive of those who did so only to be seen of men. It’s motive he is targeting, not the act itself.

As were Shadrach, Meshach and Abednego, three Jewish men thrown into a fiery furnace by Nebuchadnezzar, king of Babylon. They did not bend, bow or budge to the king’s image.

And neither have our county commissioners to the ACLU.

I wonder how these three Jewish men would feel about being forced to listen to prayers from a faith they didn’t believe in?

Thank you, Rowan County — standing strong and fighting for the Christians.

If you pray to God, you need to pray for all of the other religions in North Carolina.

Hope this case goes to a full panel of the Fourth Circuit. The two-majority panel is blind to the cultural and religious diversity in 21st century U.S., and to the religion test applied to political elections in the Bible Belt.

The reality is that the South has suffered economically from its xenophobia and the inability to acknowledge the benefits of cultural and religious diversity — the kind of diversity that made localities elsewhere vibrant and prosperous.

And we will willingly continue to “lose” out of the worldly madness and chaos around us — standing strong in our faith. And as for those who put “the love of money” in front of their beliefs, I am praying for you daily.

Still seems that both objectives could be accomplished by the commissioners praying privately.

Phil, I really hate you have become a mouthpiece for John Hood/Art Pope. Your letter sounds like nothing but excuses.

I have checked multiple sources to be sure that I am accurate. I realize the NCAE and many Democrats can’t stand for the facts on Republicans and their support for education to be publicized. I have been called a lot of things in my career, but a mouthpiece for others is not one of them.

Congratulations! God is amazing! Rev. Dr. Sharon J..Grant, my best friend for more than 30 years, a woman of gifts in the ministry. God has designed you to empower, equip, inspire and connect Christians of faith. Hood is blessed to have you.

Hood has been blessed with a gem. Congratulations to both parties.

Congratulations, Dr. Sharon Grant. I pray you have much success in this new endeavor of your professional career. May the Lord continue to bless you and keep you.

I will say that the price spike is much less than what we experienced in the aftermath of Hurricane Katrina when the Gulf area refineries were all shut down.

Love’s and other stations that are at $2.09 were not far off that mark before the pipeline broke.

That said, people in their panic mode are just making the problem worse. Hats off to those stations that are not gouging prices, and those that are limiting how much customers can purchase to prevent hoarding.

Yeah, folks, start running to the pumps and topping off your tank every day and filling up all those spare cans, and you’ll do the same thing they’ve done in cities north of here — run the price up and drain their tanks.

Did we not learn anything from the last time this happened?

I don’t understand the hesitation by any commissioners to implement a law that covers the bare necessities for an animal. The animal control officers are going on these calls anyway; now they have a law to back up their visit. Just looking at the financials, sounds like it will save money because they may not have to make redundant trips.

Tethering should be against the law. Furthermore, no one even follows up with the spay/neuter when animals are adopted in our county. That should be your starting point!

Kudos to Craig Pierce. Does suffering have time restraints? Why would Edds and Greene feel that we should let the obvious abuse occur and — because they feel we should wait—  that the suffering will have a pause? Oh, I think I am having a stroke, but I will wait until the traffic slows up before I call for an EMT. That is totally absurd.

The issue should be to keep pressure on county commissioners to make sure animals are taken care of at the shelter and as many animals as possible adopted by responsible citizens or rescued by non-profits like Bishop’s.

Don’t lose sight of the issue, Rowan County. The animals don’t have a voice, but you do. That’s the real story.

Instead of going after rescuers that are compassionate and care about the animals, why doesn’t this shelter focus on spay and neuter clinics and passing inspection?

This is sad. What words can one utter at the horror of children being subjected to evil at ages 5 to 12? Is nothing safe for the little ones anymore? Thank God above no one was injured physically.

Who holds sway over the City Council? This happened shortly before the council meeting yesterday, where person after person waited for the public comment session to speak about what? Yes — violent crime and shootings in Salisbury. Begging City Council to do something, and yet, what is being done? …

And, of course, getting those empty lots mowed is important. Are you kidding me? Reason, pre-emptive actions don’t seem to be the logical result of bodies on the ground or the clear anxiety in so much of the black community.

Keep the blinders on, the ear plugs in, the sad look on your faces, and you will get just what is already here — gangs controlling a city with an understaffed and under-trained police department and a City Council unable or unwilling to heed the public cry for immediate and meaningful action.

“We appreciate the court recognizing the plaintiffs failed to identify even one North Carolinian who was denied the ability to get married under this reasonable law.”

Using the same logic, why do we need HB2 when not even one North Carolinian was victimized without it?

… Bill Ward: Proclamation did not free all slaves

The second paragraph of his opinion piece takes a reference made in Betty Dan Spencer’s factual essay, “How the Empire began,” out of context and spins it into an irrelevant diatribe about “King Lincoln.” She referred to a slave auction held Jan. 2, 1865 at the Boyden House after the Emancipation Proclamation was issued Jan. 1, 1863. Ward claims this makes no sense. So what! Mrs. Spencer was writing about the Empire Hotel and the era in which it began, nothing else.

In our public schools and colleges, students receive “cookie cutter” history, at best. And that gets passed down from one generation to the next — cookie cutter. Most of the best U.S. history resources were written from the mid-19th Century to the mid-20th Century, and I am fortunate to have acquired many of those for my personal use. …

One you might try, for example, is “Lincoln the Man,” by Edgar Lee Masters, an attorney from Illinois. It’s probably the best complete Lincoln biography ever written.