PREP FOOTBALL: Weeks breaks a school record, closes in on another 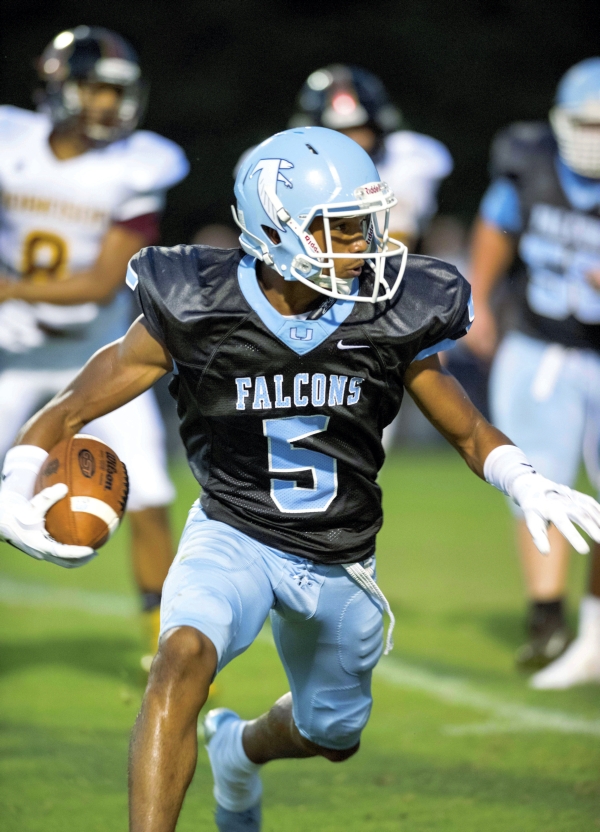 Prep football notebook …
West Rowan senior Kortez Weeks has 14 catches for 282 yards in his two games since moving back to wideout and is now No. 1 in career receptions at West with 119.
The previous record holder was Jon Crucitti, who made 112 catches for the Falcons in 2008-09.
Weeks ranks eighth on the county’s all-time list for receptions and probably will move up a few spots on Friday when West plays at South Rowan. North Rowan’s Ed Suber ranks seventh with 120 catches, while Carson’s K.J. Pressley is sixth with 121.
As far as career receiving yards, Weeks stands at 1,841, just 7 yards behind Crucitti’s school record of 1,848.
There have been only five 2,000-yard receivers in Rowan County history, but Weeks should make that club a little larger very soon.
Lamont Savage, one of the county’s all-time receiving leaders for his big plays from 2002-05, split his career between North Rowan and West Rowan. He had 1,625 receiving yards as a Falcon.
•••
In his second start, West sophomore Payne Stolsworth threw for 283 yards in a 35-7 South Piedmont Conference win at Northwest Cabarrus, including an 84-yard connection with Armoni Hogue.
“Our OL did a good job protecting Payne,” West coach Joe Nixon said. “Javon Lofton and (Avery Allen had really good games.”
Lofton is West’s most experienced offensive lineman. Allen moved from tight end to tackle two weeks ago.
Stolsworth’s big game ranked among the top 40 passing games in county history and is fifth on West’s all-time list behind Kacey Otto efforts against Carson in 2014 and 2015, Shane Weimer’s 300-yard night against Statesville in 2005, and Tim Hogue’s 294 yards against West Iredell in 1994.
Otto’s 337 passing yards against Carson in the 2015 state playoffs is the school record.
•••
West Rowan’s defense allowed only two pass completions against Northwest Cabarrus.
“You give up two completions in a game, and that means guys are covering well,” Nixon said
Nixon praised cornerbacks Deyquan Byrd and Paris Hillie and drop end Brandon Wallace.
Rodney Howell, a defensive lineman returning from a dislocated elbow, also had a strong night.
Byrd had an interception return for a touchdown and tied Carson’s Brenden Westbrook for the county lead with three picks.
•••
West defensive lineman Devin Turner’s status for the South game is still uncertain. He was tossed from the Northwest Cabarrus contest.
••
When a player is thrown out of a game by an official, it can be reported to the NCHSAA as either an ejection (which brings an additional penalty of sitting out the next game) or a disqualification (which means players can return to action in the next game).
If a player is deemed to have been fighting or instigating a fight, it means a two-game suspension.

South Rowan
South (0-4, 0-2 SPC) lost 41-11 to Concord in SPC play, but SR coach Daniel Yow saw more positives than negatives. It was a 7-3 game late in the second quarter.
•••
South quarterback Austin Chrismon is fifth in the county in rushing yards per game and continues to spark the Raiders’ offense.
“He’s been playing well, and we understand teams are going to start game-planning to stop him from running the ball,” South Rowan coach Daniel Yow said. “When that happens, our other guys should be ready to take advantage of that.”
Chrismon was South’s offensive player of the week.
•••
Yow also was happy with the play of slotbacks Marquis Rhyne and Cameron Hurd.
“They didn’t have big stats, but the effort was there from them on every play,” Yow said. “They didn’t take any plays off.”
•••
Lineman Thomas Borkowski was recognized as South’s defensive player of the week, partly for a fumble recovery but mostly for his intensity.
“His effort was great even on the plays that were going away from him,” Yow said.
•••
Yow was impressed by Concord’s passing game.
“The quarterback (Jacob Irby) is good and they got us on crossing routing a few times,” Yow said. “They also got us some on play-action when our guys were peeking in the backfield.”
•••
The South-West game will include a coaching matchup of two former Catawba offensive linemen — Yow and Nixon.
“South has improved,” Nixon said. “Daniel is doing a good job over there. Definitely, they’re better than last year.”

North Rowan
Some games go wrong from the start, and that was the case in North’s 49-13 loss at South Iredell.
It was 13-0 before North ran a play on offense and it was 21-0 after nine minutes.
North (3-2) gave up more points than it had allowed in its four previous games combined.
“It was just bad,” North coach Ben Hampton said. “We didn’t get much pressure on the quarterback. Their quarterback (Brady Pope) is one of the best I’ve ever seen, and he was aided by a very good offensive line.”
Pope, a junior, has been good against everybody. He’s completing 64.4 percent of his passes and is throwing for 315 yards per game. He’s thrown 13 TD passes.
•••
The 49 points were the most surrendered by the Cavaliers in a game since they lost, 51-0, to Albemarle in 2011.
•••
Hampton said the bright spot for North in the lopsided loss was receiver Desmond Gray. Gray had a career game with six catches for 132 yards and a touchdown.
Alonzo Sirleaf snagged his fourth TD catch of the season.
Corbin Smith threw his sixth and seventh touchdown passes.
•••
North expects to get punter/kicker Jacob Young back for Friday’s game against West Stokes. He was hurt in the Statesville game in Week 3.

East Rowan
Running back Max Wall was tossed out of Friday’s 30-16 loss at Carson with about seven minutes left, although both East assistant Brett Hatley and Carson head coach Joe Pinyan were certain that officials tossed the wrong Mustang in a case of mistaken identity.
Pinyan said officials told him Wall’s departure was a “disqualification,” which means he’s expected to be in action when East returns to the field against Hickory Ridge on Sept. 30.
East (2-3, 1-2 SPC) is off this week.
•••
Pinyan lives close to East and said he and Wall are neighbors.
When Wall went down with a cramp near the East sideline, Pinyan went over to him.
“I told him it would be OK if he took about 10 plays off,” Pinyan said with a laugh. “But he told me he was going right back in.”
•••
Wall has 505 rushing yards in the past two weeks and the senior is running away with the county rushing title. With 806 yards, he’s almost doubled the county’s No. 2 rusher — West’s Jovon Quarles.
Wall moved up to 10th on the county’s all-time rushing list on Friday. He has 3,438 career yards and surpassed a couple of all-time greats in the Carson game — North Rowan’s Mark Sturgis (1974-76) and Salisbury’s Romar Morris (2007-10).
•••
A big part of Carson’s gameplan on Friday was not to let Wall and Wesley Porter hurt them on kickoff returns, but the elusive Porter still had a big one. Porter also had a nice return of an interception, although it was wiped out by a roughing the passer penalty.
•••
Franklin Downing had his second TD catch of the season against Carson, and East QB Tate Houpe turned in his best passing game of the season with 150 yards.

Carson
Carson (3-1, 2-0 SPC) owns a three-game winning streak and has beaten rival East four straight times, but the Cougars suffered a blow when they lost kicker/punter Cole Howard for the season with a broken ankle.
Howard was hurt when he was part of a tackle on a kickoff.
“Where it hurts us the most is kicking off because Cole made a lot of teams start from the 20, and now we don’t have that capability,” Pinyan said. “As far as punting and kicking PATs and field goals, we’re pretty deep.”
Quarterback Owen White will take over punting duties, which means opponents will have to be wary of a fake every time Carson goes into punt formation. Soccer goalkeeper Grayson Owens will handle the rest of the kicking duties.
•••
Carson got 13 tackles from spur Cameron Rayfield on Friday and 10 tackles and a breakup from safety Andrew Jerman.
Linebackers Isaac Bell (11 tackles) and Chandler Herring (nine tackles) also had active games.
Bell also caught his third two-point conversion pass of the season and the sixth of his career.
•••
Corner Brenden Westbrook had a chance at another pick-six, but he couldn’t hang on.
“That guy is a beast,” Carson linebacker Bell said. “If they throw to his side, he’s intercepting it or knocking it down.”
•••
Pinyan said left guard Nick Klein, a sophomore, and senior center Alex Barrier played pretty well on Friday, but there were more blocking mistakes than he expected to see on film.
“We can’t make as many mistakes this week if we’re going to have a chance against Robinson,” Pinyan said.

Salisbury
Salisbury (1-4) lost its fourth straight game on Friday, falling to Ledford, 41-7.
•••
Salisbury’s offense has been held to a single touchdown three times this season.
Linebacker Tywun Rivens helped out the offense with seven carries for 36 yards and a TD against Ledford.
“He dragged two good safeties for that touchdown,” Salisbury coach Ryan Crowder said. “He dragged one 8 yards and one for 10.”
•••
Salisbury missed guard Henry Holman and quarterback Tyquan Jones, who were out with injuries against Ledford.
•••
Crowder said the Hornets had their hands full with Ledford defensive lineman Donnovan Campbell.
“You may as well have roped off part of the field with police tape because we couldn’t go anywhere near where big 92 was,” Crowder said. “It was a crime scene whenever we did.”
•••
Salisbury plays its final non-conference game Friday when it goes to Dobson to play Surry Central. It will be Salisbury’s first game against a 2A opponent.
The Hornets whipped Surry Central, 31-6, last season for one of the three wins they had on the field.
“They’re senior-heavy this time, a good team that’s 4-1, and we’ll find out a lot about ourselves going into conference,” Crowder said. “They won’t be as big as Ledford, but they’ll play the same style as Ledford.”
•••
Salisbury plays West Montgomery in a makeup jayvee game tonight at home and also will be home the next two Thursdays.

Davie
Davie (4-1) won two games without them, but it welcomes back QB Chris Reynolds and receiver Cooper Wall for Friday’s Central Piedmont Conference opener at R.J. Reynolds.
Neither has played since Wall (ribs) and Reynolds (ankle) were hurt in the loss to Greensboro Dudley, now the No. 1-ranked team in 4A.
•••
The CPC looks strong this season, but Davie will be favored in its first two games against R.J. Reynolds and Reagan prior to big showdowns with West Forsyth and North Davidson.
•••
Davie linebacker Broc Barnette continued his spree of big plays with a pick-six in the 37-12 win against Hopewell.

A.L. Brown
The Wonders (3-1) have been sitting on the Mooresville loss for two weeks and return to the field at home against North Meck on Friday in a MECKA opener.
The Wonders have a perfect record against the Vikings and have beaten them, 30-14, 33-12 and 42-20 the past three seasons.