PREP FOOTBALL: Carson’s Cole Sifford comes into his own 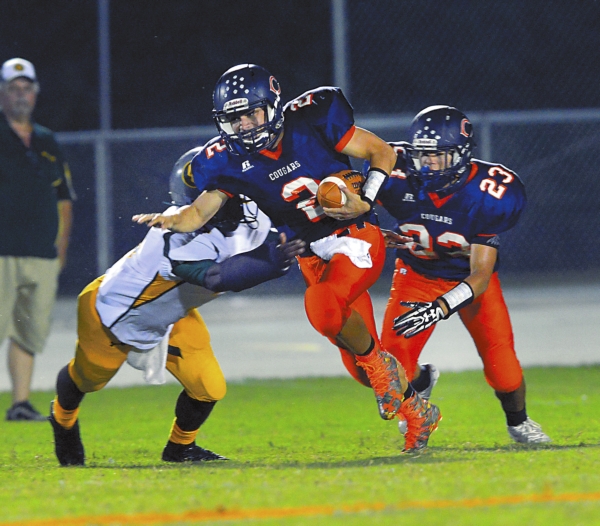 CHINA GROVE — Cole Sifford’s surprisingly bullish runs in Carson’s 30-16 win against East Rowan led to teammates and coaches calling him “Ferdinand” this week.
But Sifford is the opposite of Ferdinand, the children’s-book animal hero who prefers sniffing flowers to fighting matadors. Sifford would try to knock the matador on his butt.
The junior fullback had a career game against East — 21 carries, 149 rushing yards — and it wasn’t a fluke. He had 90 yards on 16 carries at Salisbury two weeks earlier.
“He runs the trap extremely well,” Carson coach Joe Pinyan said. “He sees it unfolding, and he makes the right cut. The thing you don’t realize about him until he comes out from under that helmet and shoulder pads, is that he’s not very big.”
Also a basketball player, Sifford is quick and exceptionally strong for his modest size. While his 5-foot-7, 155-pound dimensions aren’t going to make the hearts of college recruiters beat faster, he bench-presses 215 pounds. He also has excellent vision, and in Carson’s offensive scheme, that’s an attribute even more important than speed.
“Cole may be small, but he’s got big power,” Carson quarterback Owen White said. “Great leader. Hard worker. We couldn’t ask for any more.”
Pinyan has a proud history of productive fullbacks at Salisbury and Carson, and Sifford’s successful games against Salisbury and East Rowan have lifted him into fourth place on the county rushing list with 71 yards per game. He’s behind East’s Max Wall, West Rowan’s Jovon Quarles and North Rowan’s Jaleel Webster.
“With Max, I’m pretty sure the rest of us in the county are competing for second place,” Sifford said with a laugh.
Sifford came close to not competing at all. He contemplated giving up football during the summer months.
“I was feeling burned out a little bit and I’d pretty much decided not to play,” Sifford said. “But lot of people stayed after me to play. Coach Pinyan stayed after me to play and I’m very glad now that he did.”
Sifford was the jayvee quarterback as a sophomore and he was called up to guide the varsity in the regular-season game against West Rowan (a 28-7 loss) when Owen White was sidelined with a concussion.
“We found out he’s tough enough to play about any position,” Pinyan said. “And we found out he’s got a take-charge personality.”
Sifford wasn’t exactly sure where he’d fit into Carson’s offense this season — halfback, fullback, quarterback or receiver. Pinyan wasn’t sure either, and Carson’s 45-3 loss to North Rowan in the Cougars’ season opener was an ugly audition as far as getting the right guys in the right places
“We really hadn’t figured out our roles yet,” Sifford said.
Since that stumbling start, Carson has won three straight and is 2-0 in conference play for the first time in its 11 years of football.
Carson’s wins against Salisbury and Central Cabarrus were keyed by defense and special teams. The offense was eager to contribute more against East.
“That’s what we talked about all week,” Sifford said. “The defense had played great, and it was time for us to do our part and help them out. We wanted to put up some points.”
Adding to the desire for an offensive breakout was the rivalry aspect of playing East, one of Carson’s neighbors and fiercest foes.
“There are people that think our rival is South Rowan, but for me, East is definitely the biggest,” Sifford said.
Sifford helped Carson take a 14-9 halftime lead. All eight of his first-half carries were positive plays — two went for double-digit yards — and he also fought for 14 yards on a swing pass.
Sifford had three more carries of more than 10 yards in the second half. He was stopped for no gain twice, but there were no negative plays.
“The play I remember is when East blew up a trap,” Pinyan said. “But he found another hole and still got 5 yards out of it. I’d like to say I taught him how to do things like that, but you’re not supposed to lie.”
Sifford gave credit to his offensive line for the blocks and to White for his reads and decisions. Besides its triple-option plays, Carson ran a lot of quick-hitting, double-option stuff with White handing the ball to Sifford or yanking it out of Sifford’s belly and taking off himself.
“A guy who really helped me have a good night was (right guard) Dequan Simms,” Sifford said. “He made great trap blocks time after time.”
Carson put in offensive wrinkles for East, and most worked. Carson shifted frequently, putting tackles in motion. That’s something you don’t see every Friday, but it’s legal if they’re on the end of the line and haven’t put a hand on the ground.
“We didn’t always block as well as I’d hoped,” Pinyan said. “But a lot of times we were able to outnumber them.”
Collectively, Carson had by far its biggest rushing game of the season (369 yards), with White and halfbacks Bailey Rayfield and James Kotcamp also turning in strong efforts.
“We had more team rushing yards than we’d had in our first three games put together,” Pinyan said. “I’ve been sleeping better this week.”
Carson faces a big challenge Friday at Robinson. Robinson was considered one of the preseason favorites in the SPC and remains a highly regarded team despite an early loss at West Rowan. If Carson wins on the road at Robinson, then it becomes a contender in the SPC.
“The conference is wide open,” Sifford said. “We all believe we can do good things.”