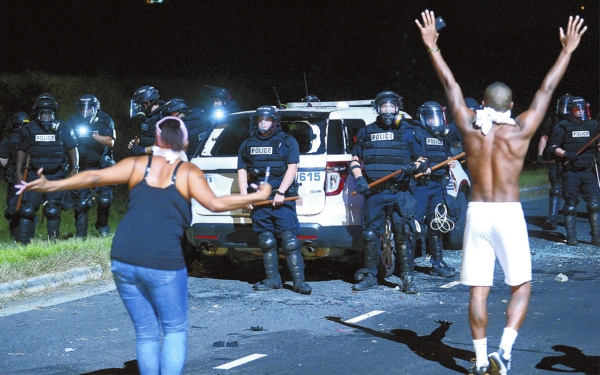 Protesters approach police in Charlotte, N.C., Tuesday, Sept. 20, 2016. Authorities used tear gas to disperse protesters in an overnight demonstration that broke out Tuesday after Keith Lamont Scott was fatally shot by an officer at an apartment complex. (Jeff Siner/The Charlotte Observer via AP)

CHARLOTTE (AP) — While Cam Newton called the latest police shooting in Charlotte, North Carolina “embarrassing,” the Carolina Panthers quarterback says he’s not rushing to any judgments until he has more information.

The league MVP did have some strong comments Wednesday about social injustice and the African-American community.

Keith Lamont Scott, a 43-year-old African-American man, was shot and killed Tuesday by a black police officer, sparking a violent protest early Wednesday morning about 15 miles from the team’s stadium. More than a dozen police officers were injured during the protest. There also was vandalism to police vehicles and looting.

Newton said that while he doesn’t see things through a “black-white lens,” he does realize that people view him as a spokesman for the African-American community because of his stature in the NFL.

“I’m an African-American and I’m not happy how the justice has been dealt with over the years, and the state of oppression in our community, but we also as black people have to do right by ourselves,” Newton said. “We can’t be hypocrites.”

Newton went on to say, “From being a black person, there is a lot of black people that don’t do right by black people, so you can’t be a hypocrite and just say ‘Oh a white man or a white police officer killed a black man.’ Now that’s still messed up and I’m not sitting up here and saying that’s ok.

“I am saying we have to have a clear eye vision on both sides and starts with everyone holding each other accountable and policing yourselves.”

Newton is unsure if his teammates plan to join Colin Kaepernick in a silent protest before Carolina’s home Sunday against Minnesota. Kaepernick has been protesting against the oppression of African-Americans and minorities, and police brutality by kneeling during the national anthem.

Newton did praise Kaepernick’s stance, which includes calling for responsible parties to be held accountable.

“I salute Colin Kaepernick for what he stands for, but at the end of day I can make a stand in my own right,” Newton said. “That is why I have a foundation and I have been trying to do anything and everything to bring the city of Charlotte, or wherever I am around, and impact it in a positive way. I’m hoping people see that and do the same thing.”

Some of Newton’s teammates took to Twitter to express their outrage at the police shooting.

Wide receiver Philly Brown tweeted “This is becoming crazy!!! Makes it hard not to stand up!!”

However, Brown told reporters he doesn’t think he will protest before the game.

Panthers safety Tre Boston tweeted, “Wow this actually hurts, a city I’ve grown to love. Charlotte what are we doing? This is in my backyard. We must do better #KeithLamontScott”

Boston sent a second tweet saying he was talking about the officer’s actions, not the protests.

He did not comment when asked in the locker room about his tweets, saying he had to go lift weights instead.

Authorities had to use tear gas to disperse the protests in North Carolina’s largest city, which joins Milwaukee, Baltimore and Ferguson, Missouri, on the list of U.S. cities that erupted in violence over the death of black men at the hands of police.

The Charlotte protest came on the heels of hundreds of protesters rallying Tuesday night outside police headquarters in downtown Tulsa, Oklahoma , following the fatal shooting of an unarmed black man Friday by police.

Panthers coach Ron Rivera said he felt it is “not fair” for the media to ask players about the police shootings since many of them aren’t informed about what is happening in the world around them even though several of his players had expressed an opinion on social media.

Rivera believes those questions should be directed toward political officials who should work toward change.

“That’s a tough issue,” Rivera said. “We’ve got a whole bunch of young men in that locker room, you guys all want to ask what they think about it. I’m not sure how many of them know what’s going on.

“So I don’t think it’s fair for us to be put in a position to make comments about stuff that we really don’t know about. The thing we have to do is hope things get fixed, get fixed quickly and so we can keep going forward.”

Rivera said “maybe instead of tearing up the city” that people should get out and vote if they want change.