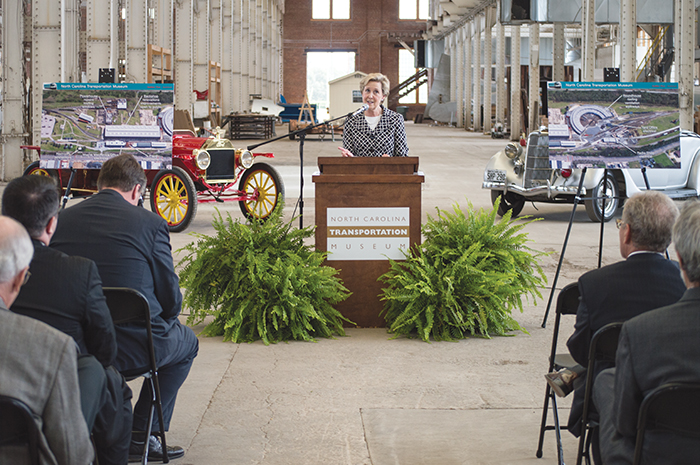 Natural and Cultural resources Secretary Susan Kluttz and Deputy Secretary Kevin Cherry on Wednesday announced the receipt of $150,000 in state funds for electrical work and new lighting at the NC Transportation Museum. Those funds add to millions in funds received since renovation efforts started in 2013. Previously received funds include $2.7 million in state money, $1.7 million from the transportation museum’s foundation and $300,000 from the museum itself.

“I’m proud to say that just in the last year what we have seen has been incredible,” Kluttz said during Wednesday’s announcement. “There’s no question that this transportation museum is a treasure for the state of North Carolina. It’s one of our most popular sites.”

Once electrical and lighting work from the latest round of funding wraps up, state and local officials hope evening events at the museum are more frequent. One comment by Kluttz drew a few chuckles, but she was serious about the statement.

“I’m told that from here on we will not have to rent ugly, loud, smelly lights that we have had to rent to run (The Polar Express) event,” she said.

Kluttz and Cherry said the $150,000 came from a special allocation in the state budget. Kluttz spent a significant portion of her Wednesday speech thanking various legislators and public officials for their work to provide renovation funds.

“We’re doing this to give visitors more things to see and do on a day-to-day basis,” Cherry said. “And, we’re doing this to provide upgrades to the museum so that we have a way to generate more more ticket sales, more rentals.”

NC Transportation Museum Director Kelly Alexander said staff and volunteers at the museum are excited for the changes.

State Sen. Andrew Brock, R-34, spoke during Wednesday’s announcement and noted that the museum has improved significant in recent years.

Projects not yet finished include renovating parts of the museum’s backshop and phase two of the powerhouse, which will make it an open-to-the-public facility. Cherry listed other, potential projects as adding to the ability to do traveling exhibits, renovations at the train car repair shed, outdoor spaces and adding antique train rides.