Is diversity lacking in downtown? 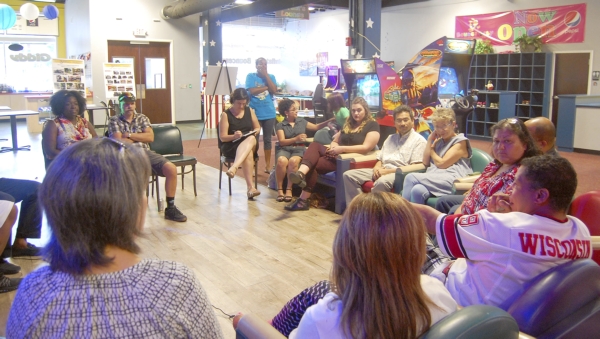 SALISBURY — Diversity and inclusion in Salisbury’s downtown dominated the discussion during a public input session hosted by Bounce City and Downtown Salisbury, Inc. on Wednesday evening.

The event was part of Bounce City’s “Come in Unity with the Community” series, which aims to decrease crime and keep youth occupied with events and discussions.

While their children bounced around and ate ice cream, the adults talked about what they thought needed improvement in the downtown area.

A microphone was passed around to the 15 community members in attendance.

Paula Bohland, executive director of DSI, said it was a chance to hear from the public in a more informal way and let the conversation go where it needed to go.

“We want to hear what you want to tell us about improving downtown,” she said.

During the discussion, Pastor Anthony Smith said the city needs to increase diversity behind the scenes.

“When ya’ll were putting together the invites, who was in the room?”

He said the people creating the invitations to different downtown events may unintentionally target certain groups of people while excluding others.

Some said they thought downtown business owners needed some type of diversity training to be more welcoming.

Evelyn Medina, owner of Mean Mug, said some minorities may feel like there is nothing that caters to them downtown. Some may not feel comfortable shopping in the stores.

“It’s going to be very hard for you to get Latinos downtown,” she said.

“I didn’t move here to be selective in who I serve,” he said, adding that he would want to know if any of his customers felt they were being treated differently because of how they looked or what they were wearing.

“You have to make them feel welcome,” she said.

Bohland told the crowd that she was glad they felt comfortable enough to be honest with her and the other officials during the discussion.

“We want you and ask you and encourage you to be in the room as we make those invitations,” she said.

She later said she wanted to have more in-depth conversations about diversity where no one feels defensive about expressing and hearing different opinions.

Davis said she thought the event was successful and a lot of great ideas were shared.

“I would like the city to put skin in the game and make downtown improve from a cultural diversity aspect,” she said.

Bohland said there will be more discussions on ways to improve downtown at different locations in the city in the future.

For those who want to provide input but cannot attend or do not feel comfortable attending the discussions, they can submit comments or ideas on DSI’s website: downtownsalisburync.com.