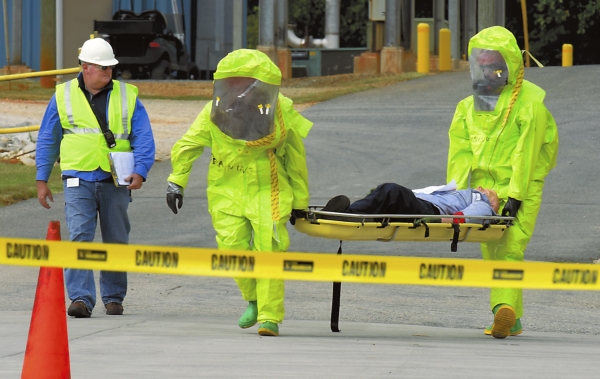 Salisbury firefighter hazmat team members bring a mannequin out of the plant during the training drill. On the left is an evaluator who was grading their response. photo by Wayne Hinshaw, for the Salisbury Post

SALISBURY — This is a drill. This is only a drill. The words over the loud speaker at Akzo Nobel began what would be a nearly four-hour chemical spill training exercise. The multi-agency drill was an opportunity to test company personnel and area first responders.

The drill had been in the planning stages for six to eight months prior to Wednesday’s exercise. The scenario was that a storage tank leaked in an area outside the plant, which is located on Cedar Springs Road, just beside Henkel and off U.S. 29.

Akzo Nobel is a specialty chemicals supplier — chemicals that are used in paints, cosmetics, and detergents. The Dutch multinational company also is in the business of performance coatings and decorative paints.

Each department had “muster stations” where they would rally if there was an actual spill or other similar emergency.

“We strive to have an excellent safety record. We strive to be a good corporate citizen. Our responsibility is to make sure we are prepared to respond,” said site coordinator Brian Owen.

Three weeks ago ,the teams got together for a “table top” read-through of the entire exercise in real time.

“We might begin with a table top to identify areas for improvement, to find out deficiencies,” Thomason said.

He said the drill helps emergency responders and company personnel.

During the drill, the Akzo Nobel hazardous materials team goes in first to assess the situation. The scenario involved two people who were inside a contained area during the leak. The rescue team needed to go in, locate them and safely bring them out.

Before the hazardous materials team suited up to bring the injured out, other members checked their vital signs. Each member had their blood pressure checked prior to going in and checked again afterward.

“Our first priority is the safety of the people,” said David Simons, who is health, safety, environmental, security and waste treatment plant manager at Akzo Nobel.

Representatives from Henkel Corporation also participated in the exercise since the companies are close neighbors and share some onsite facilities.

“We support them during an incident,” he said.

He said both companies have copies of each other’s disaster response plan.

Simons said they try to be as realistic as possible and in this case threw another situation into the scenario.

One of the Akzo Nobel responders was “having chest pains” and wound up being a patient himself.

The original scenario had two employees lost in the leak area and toward the end, one of the lost employees turned into a fatality.

“You have to make it real life,” Simons said.

He said it was important they get the opportunity to practice.

Along the way there were a number of observers from Akzo Nobel and the emergency staff.

Following a drill the observers and participants have a debriefing, which covers any missteps, things that need more focus and what worked.