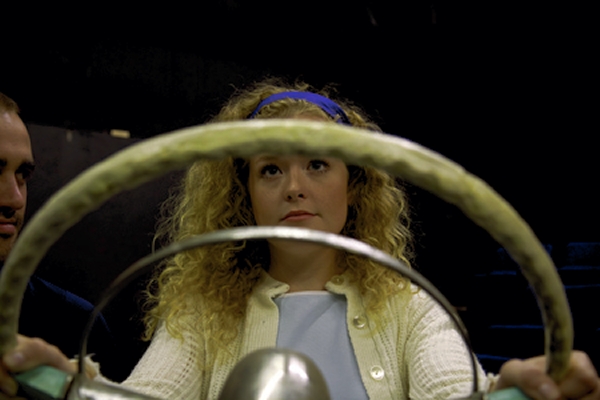 Catawba Theatre presents How I Learned to Drive

The Pulitzer Prize-winning drama “How I Learned to Drive” by Paula Vogel, one of America’s most daring playwrights, shifts backward and forward through time to trace one woman’s engrossing journey from adolescence into adulthood. In this no-holds-barred look back through the rear-view, Li’l Bit, Vogel’s protagonist, confronts the lessons learned behind the wheel of her uncle’s ’56 Chevy — painful lessons most people would be reluctant to share.

According to show director, senior Katelyn Long, “this is a play about acceptance, healing and family. Focused on relationships and Li’l Bit’s discovery of how to deal with the fire inside of her.”

Early in “Exit the King,” the realist Queen Marguerite says, “We haven’t the time to take our time,” and promises that the king will be dead in 90 minutes. Catawba College Theatre Arts Blue Masque Rep continues with what is considered to be Eugene Ionesco’s crowning masterpiece, a compelling tragi-comedy that captures King Berenger in the last hours of his life as his centuries-long reign is coming to an end.

As the third piece in Ionesco’s “Berenger Cycle,” “Exit the King” stands out as his most accessible and universal play. Scholars have called it everything from an allegory, a dark comedy, a death ritual, a tragic farce, an absurdist lyric poem, a hymn of praise and moving celebration of life. This poignant meditation on death speaks differently to each and every audience member.

“The goal for this production” according to its director, senior Trey Irby, “is to externalize the characters’ world views, to see the King’s internal crisis with death play out onstage so that the audience can see how far people have distanced themselves from their humanity. It is also a critique of the rising consumer culture that has both fed man’s ego and prevented him from preparing himself for death.”

“Exit the King” features Kevin Kent ’19 of Monroe as the doomed King Berenger; Laurel Edge ’18 of Waxhaw as the wise Queen Marguerite; Kayla Guffey ’18 of Clemmons as the young and flighty Queen Marie; Charles Karvon ’19 of Concord as the palace doctor, surgeon, executioner, bacteriologist and astrologist; Amy Kimborough ’19 of Roxboro as Juliette the maid; and George Glass ’17 of Concord as the guard.

Tickets and patron memberships are available at 704-637-4481 weekday business hours, at www.catawba.edu/theatretix or boxoffice@catawba.edu.

Shuttle service from the RCCC parking lot to the theatre door will begin one hour before the show begins and the lobby box office opens one hour before curtain. Tickets run $6-$9 with discounts for students and senior adults age 55 and over.