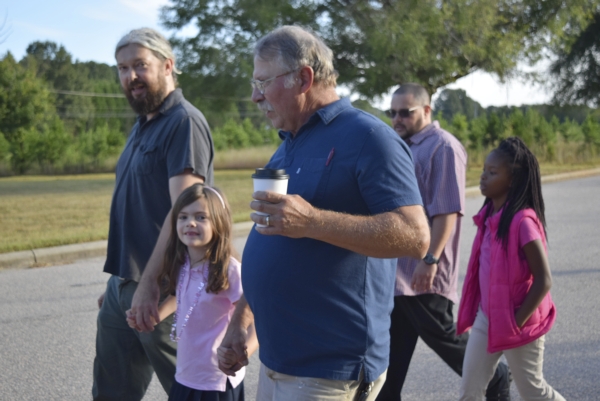 SALISBURY — Tuesday, Gavin Folks decided to surprise his daughter, Iyanna, at school. That morning he said goodbye to her as usual, and then left — she thought to go to work. But Folks took the day off, and when Iyanna was called up to Isenberg Elementary’s multi-purpose room shortly after the bell rang, he was waiting for her.

Folks was one of about two dozen fathers who responded to a call to be more involved in their children’s education.

“A lot of our kids don’t see their dads in school a lot unless they’re in trouble,” Isenberg Principal Marvin Moore said.

Moore wants to change that perception. Tuesday the school, in partnership with Communities in Schools, held a “Million Father March,” where fathers and their children walked around the school in solidarity.

“Oftentimes school is geared towards females and the kids — fathers are left out of the loop,” Moore said.

This is the second year Isenberg has held the march.

Krystal Stukes, a representative from Communities in Schools of Rowan, said that often there are more maternal figures in schools. But having male role models is important, too.

After the march, the fathers joined their children in class for morning meetings.

Paisley Rocco, a first grader at Isenberg, skipped down the hall with father, Iain Rocco, and Grandfather, Jim Hill. The march just happened to fall on her birthday, but Rocco said he thought being involved in her schooling was something important. Hill agreed.

“I think it’s kind of neat that the school is … trying to get everyone included,” he said.

School is a large part of children’s lives, he said, so why wouldn’t parents be involved in it?

“It just makes sense,” he said.

During morning meeting, the students sat quietly and were on their best behavior. Stukes said that was one of the benefits of having fathers around the school.

After the meetings, Moore talked to the dads about ways that they could become involved in Isenberg. Moore is using the march as a launching pad for a program he calls “Dads on Duty.” The program would encourage fathers to come help out around the school.

“When you are around your kids, at school, it makes a world of difference,” he said.

Once they’ve gone through appropriate volunteer certification, dads could help out around the school doing odd jobs, work as monitors on the bus or car-rider line or eat lunch with students. They could even mentor or help tutor. Training sessions were offered later in the day.

During his talk, Moore underscored that fathers have the power to inspire their kids and help them improve in school.

And having men present in schools would help out more than just the students — it could help the school as a whole. Moore pointed out that it would add an extra measure of security and could ensure that other visitors were polite to school personnel.

“People would be less apt to [be rude] if you have a bunch of grown men walking around … just being present,” he said.

Not every dad can be everywhere, or do every job, Moore said, but he did want them to be involved.