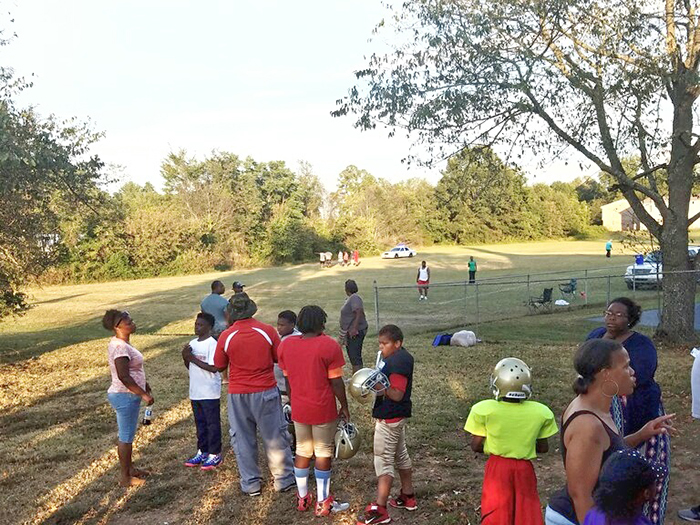 The Salisbury 49ers AAU team was in the middle of practicing for a big rivalry game when shots rang out on an adjacent piece of property. Police said no one was shot, but the nearby gunshots canceled practice and forced the children — ages 5 to 12 — to the ground.

“What just happened right there, that’s what we don’t need to be doing,” one coach told the players.

Coach Brian Alford said the 49ers team was in the midst of practicing for a major rivalry game against the High Point Steelers when the shots rang out. There were five shots before a car sped off, Alford said.

“We are worried regardless,” he said. “I mean, we all know the history of this side of town, the West End. But, you don’t expect this to happen.”

As police investigated the shooting, players slowly began to file out of practice. One coach warned remaining players to ensure a parent or guardian stayed at practice in case a similar incident happens in the future.

Now, players have to get refocused, Alford said.

“When the kids get back, we’re definitely going to have to talk to them about safety, and it’s bad that we have to do that,” he said. “But we’re going to find every positive thing that we can. We want them to make the right choices and stay away from violence, period.”

Coaches and parents said it’s not the first time gunshots have erupted during or immediately after a football game. It’s become part of reality, parents and coaches said.

“Yes, I am worried,” said Amy Short, who was watching the practice. “Nobody wants to hear gunshots during a youth football practice.”

Short said there were also gunshots immediately following a practice on Sept. 14 — one week prior.

Multiple coaches questioned why police officers, at least one officer, wasn’t present for the practice. The question was specifically raised because the Salisbury Police Department sponsors the team.