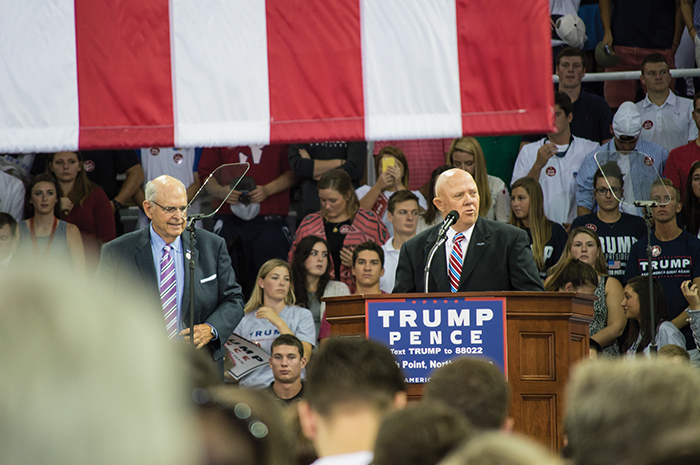 Cress led the pledge of allegiance Tuesday at a High Point rally for Republican presidential nominee Donald Trump. He also offered a few brief statements to the crowd of a couple thousand people in a gym at High Point University.

Cress served in the Army during the Vietnam war. He graduated from the infantry noncommissioned officer school in 1970. He received the Bronze Star Medal with valor for his Vietnam service and received a standing ovation when introduced during Tuesday’s event.

The pledge of allegiance went off without a hitch.

Cress said he wasn’t sure why he got selected out of all the veterans in the state. He was contacted by a person helping organize Trump’s events to ask if he’d be willing to say the pledge.

“Of course I said yes,” Cress said in an interview with the Salisbury Post.

Cress said he’s usually a “behind-the-scenes type guy.” He agreed to participate in the High Point event because it’s “a big honor for me to represent the veterans by saying the Pledge of Allegiance.”

In addition to the honor that comes with representing veterans, Cress said he also agreed to participate because he’s a Trump supporter.

Cress isn’t registered with a particular political party, but says he mostly votes for Republican candidates. He likes Trump because of his willingness to expand the military. Cress said he also believes that Trump “has a vision” for America.

“I think the last eight years of (President Barack) Obama have been a total disaster,” he said. “I may not agree with his methods, but I honestly believe that he cares enough about his reputation that he would not be a failure.”

Despite bankruptcies and numerous other controversies, Cress said “you can’t argue with Trump’s success.”

“You may argue with the way he has become successful, but you can’t argue that he is successful,” Cress said. “He has a history of providing jobs and hiring employees, and Hillary Clinton doesn’t have that history. She has never provided jobs.”