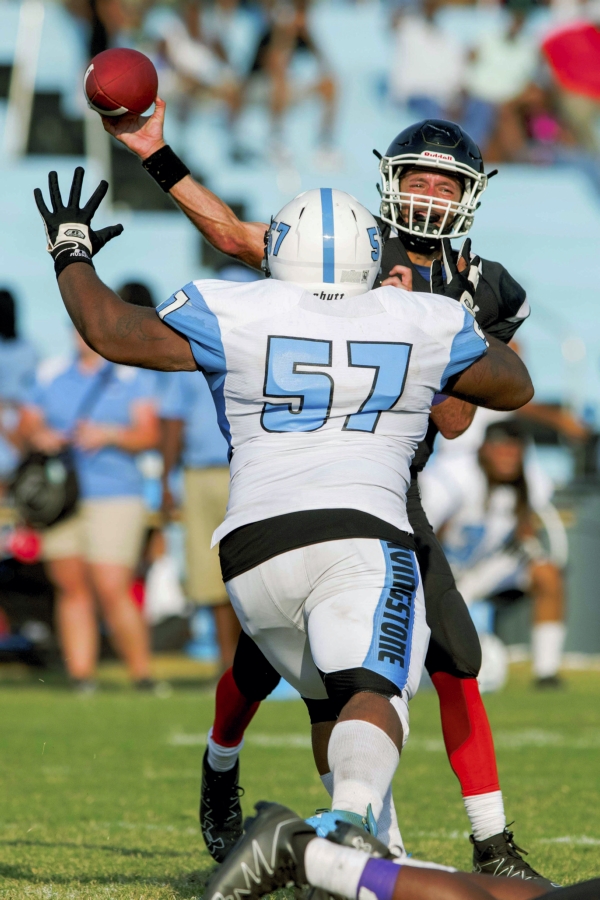 Williams was a three-year starter at FCS program Tennessee State (1993-95), throwing for over 4,700 yards and 33 touchdowns for the Tigers. He earned second team All-OVC honors as a sophomore.

Williams has also heard the old saying, “if you have three quarterbacks (splitting time), you don’t have any.” But that’s the situation he finds his team in right now.

Three different freshmen — Thaddeus Bell, Dallas Bruton and Bryan Digsby — have started at quarterback in the Blue Bears’ first three games. There could even be a fourth young signal-caller joining the fray this week.

Bruton started in the season-opening loss at Benedict and Bell quarterback the victory at home over Edward Waters on Sept. 10. Last Saturday, in the 38-12 loss at Davidson, Digsby got the call, but Bruton and Bell also played some.

Each of the QBs have some positives: Bell has passed for the most yards, Digsby has the best efficiency rating and Bruton has the best completion percentage. Bell has probably play more snaps than the other two, but he also has thrown four of the team’s seven interceptions.

“This will be a big week of practice in determining the quarterback,” said Williams on Monday at his weekly press conference. “It’s a matter of these kids understanding when a play is there and when it’s not. If it’s not there, don’t force something. Against Davidson, we had a high pass turned into a pick six. You can’t throw the ball high over the middle.

“We need to take care of business and take better care of the football,” continued Williams. “We’re going to do some things differently this week. There’s still a fierce battle for the quarterback position this week and there’s a possibility of seeing our fourth different starter.”

Against Davidson, the Blue Bears fell behind, 21-0, in the first quarter and could not dig themselves out of that deep hole.

Davidson scored quickly after a failed faked punt at the 24-yard line on Livingstone’s first possession, and then on a fumble return when punter Tyler Keene couldn’t handle the snap.

“It’s never good to have turnovers, but the timing of those turnovers put us behind the 8 ball right way,” said Williams. “That was uncharacteristic of Tyler, dropping the snap.”

“There were a lot of unfortunate occurrences, but there were some bright spots,” said Williams. “Davidson played hard and were well prepared, but our defense did an excellent job in the second half and shut them out. They didn’t come close to scoring in the second half.”

Livingstone had seven more first downs and 312 total yards compared to Davidson’s 239. But the Blue Bears’ mistakes sealed their fate.

Williams acknowledges that play must improve as the Blue Bears now move into conference play — starting with a home game this week against Chowan.

“The beauty is that we’re 0-0 in the conference, so you can still be positive,” said Williams. “These first three games have shown us our weaknesses, so now we can work on fixing them and moving forward and hopefully, make a run like we did last year.

“We know the defense is going to keep playing well and we’ll get the offense fixed,” added Williams. “We just can’t keep turning it over. Ten turnovers in three games … you’re not going to win playing like that.”

In addition to the young quarterbacks, the Livingstone offensive line is three-fifths freshmen as well, including the center.

“Overall, the offensive line is getting ‘battle tested,'” said Williams. “Inexperienced players have to get beaten a few times before they get better. They’re allowing heat on our quarterback about every other play, but it’s a group that hasn’t been together long. We’ve just got to get the QB situation nailed down and that will help the line, too.”

Chowan is 2-1 this season and being in the CIAA’s Northern Division, doesn’t play Livingstone every year. The Hawks have not been to Salisbury since 2012, winning 70-35, despite 343 yards passing and four TDs from then-freshman QB Drew Powell.

Chowan has won all four previous meetings against Livingstone, two in Salisbury and two in Murfreesboro.