Kaepernick on threats: ‘If that were to happen, you’ve proved my point’ 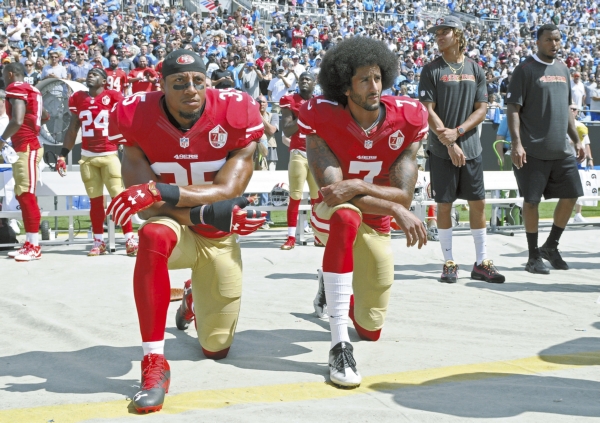 SANTA CLARA, Calif. (AP) — Colin Kaepernick says he has received death threats through social media and other avenues since he began to protest during the national anthem last month.

Kaepernick said Tuesday he has not alerted San Francisco 49ers team security about the threats and understood that could happen once he began his protest over racial oppression and police brutality in the United States.

“To me, if something like that were going to happen, you’ve proved my point,” he said. “It would be loud and clear for everyone why it happened. That would move this movement forward at a greater speed than what it is even now. Granted, I don’t want that to happen. But that’s the realization of what could happen.”

Kaepernick’s protest during the anthem became public last month when he sat during the anthem before a preseason game against Green Bay and later explained his reasoning. He has since kneeled before the Niners’ past three games. The kneeling is meant to show more respect for veterans.

Kaepernick has been joined by several other NFL players, U.S. soccer star Megan Rapinoe and scores of high school and college players who have picked up the cause.

It has not received universal support, however, and he said he was the target of racial slurs and other insults before last Sunday’s game at Carolina.

“There’s a lot of racism in this country disguised as patriotism and people want to take everything back to the flag but that’s not what we’re talking about,” he said. “We’re talking about racial discrimination, inequalities and injustices that happen across the nation.”

Kaepernick spoke to one of those cases Tuesday, the shooting of an unarmed black man in Tulsa, Oklahoma, last week. Police video shows 40-year-old Terence Crutcher walking away from the officers and toward his SUV last Friday with his hands in the air. He then approaches the driver’s side of his vehicle, where an officer shocks him with a stun gun and another fatally shoots him.

Officers had been called to the scene to respond to a report of a stalled vehicle.

The officer who shot Crutcher, Betty Shelby, was placed on paid leave.

“His car was broken down, he was looking for help and he got murdered,” Kaepernick said. “That’s a perfect example of what this is about. I think it will be very telling what happens with the officers that killed him because everybody’s eyes will be on this.”

Kaepernick also gave more details about his plans to donate $1 million to organizations supporting his cause of racial equality. He said he has people currently vetting potential charities to determine the proper ones to donate to and will launch a website detailing his donations and how the money is spent.