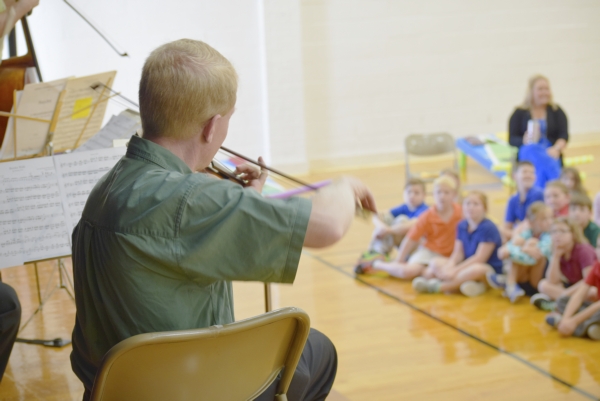 Dan Skidmore, concert master for the Salisbury Symphony, plays his violin during a mini concert at Landis Elementary School. Linda Jones, symphony executive director, said that Skidmore often creates his own arrangements so that pieces can be played by a trio of strings.

LANDIS — As the first few measures of music start up, third- and fourth-graders at Landis Elementary start tapping their fingers. They keep their eyes glued to the stage, where a trio of musicians perform on a violin, a viola and a cello; but some play at conducting, swooping their hands through the air, or play pretend violins of their own, drawing a bow across imaginary strings.

“You can see them moving to the music and really getting into it,” Linda Jones, executive director of the Salisbury Symphony, said.

For many of them, it’s a new experience.

“A lot of our students may not have an opportunity to experience the orchestra at all,” said Brooke Zehmer, principal of Landis Elementary.

The concert at Landis was one of the last of a series of “mini concerts” performed by members of the Salisbury Symphony. It’s a program the symphony has been running for more than 30 years.

Over the course of a week, representatives from the symphony visit all 20 elementary schools, playing for every third- and fourth-grader in the county. Jones said the trios visit about four schools a day.

The musicians play everything from a minuet to children’s songs, and use the opportunity to teach students about music. Taking breaks between songs, each musician stood up on stage and talked about his or her instrument. While all played stringed instruments, they pointed out the unique differences between each — whether it was a specific string, instrument size or sound.

As musicians discussed each concept they let students hear it in action, playing a short flurry of notes or using the information to lead into the next piece.

The mini concerts are very different from a typical symphony performance — in some ways, it’s getting children to dip their toes in the water. Jones said that a concert hall performance — with the musicians behind stands, dressed in black and white — is fine if you’re used to it, but most children aren’t.

But the school concerts are different. The musicians wear casual clothes and talk to the students, establishing rapport. Jones said the experience is a “great introduction to that other world.”

Jones said she can always tell when students are enjoying the concert — they bob their heads or start tapping a knee or foot. It’s the part of the visit that “thrills” her.

“That’s the best part, then you know they’re connected with the music,” she said.

After the performance, Zehmer and Jones encouraged the students to attend a full performance by the Salisbury Symphony. This is the symphony’s 50th year, and its season opens Saturday with a concert at Catawba College’s Keppel Auditorium. Jones said that balcony tickets will be available for $1.

“I think any opportunity we can take to give a broader opportunity is a good one,” Zehmer said of the mini concert.