‘Roadside Eateries’ tells you where to stop for a bite 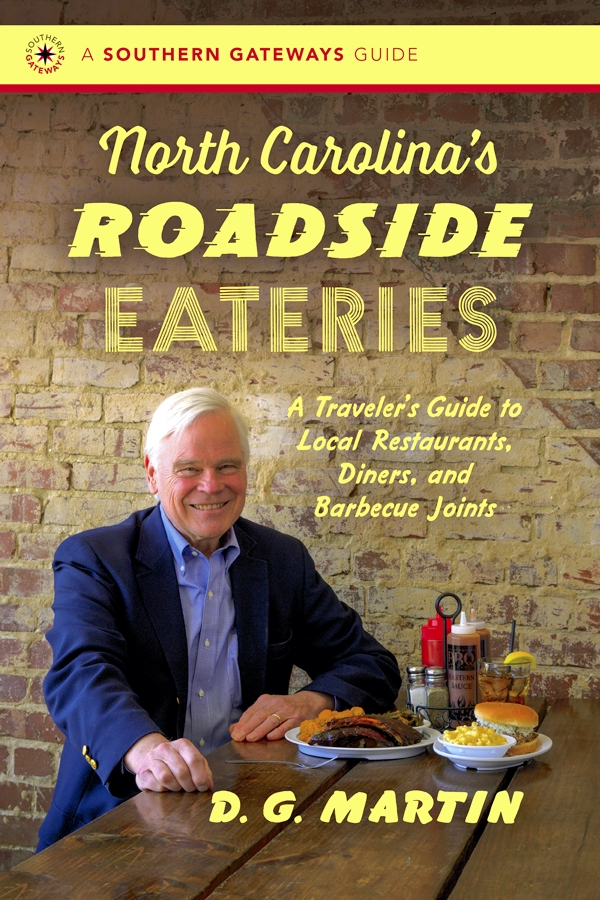 D.G. Martin lists a number of Rowan County eateries in his new book, which covers the major highways in the state.

D.G. Martin is a very busy man. If he’s not reading books and interviewing authors for “North Carolina Bookwatch,” he’s on the road, going from one meeting to the next, and eating along the way.

Martin splits the state by highway regions, so he makes it through the mountains, Piedmont, sandhills and coast.

And he stopped for a while in Rowan County, listing familiar places like Keaton’s BBQ, College Barbecue, Richard’s Bar-B-Q, Wink’s King of Barbecue, Gary’s Bar-B-Cue and Porky’s Bar-B-Q.

Of course he stopped at Lexington Barbecue, too.

Of Keaton’s, he writes: “I don’t know how to say it other than this: Keaton’s is something different —something you should not miss.” He’s right about this, too, Keaton’s is not a place you “happen by.” It’s a destination. And he imparts this important information — Keaton’s does not accept plastic. Bring cash, and remember it is open just Wednesday-Saturday. Also know, if you haven’t ventured there yet, that all you get with your chicken is a slice of bread, unless you order sides separately.

Keaton’s makes his list for the Interstate 40 trek, from Waynesville to Wilmington.

The main road that runs through Rowan County, is, of course, Interstate 85. Martin’s directions to College, et. al, start at I-85. He also points out interesting things to see after you eat, such as the National Cemetery (from Richard’s) the VA Medical Center and Catawba College (from College), Old Stone House (from Wink’s) and Tiger World, (from Gary’s). He even includes Copart Salvage Auto Auctions (from Porky’s) for a look at autos through the ages — who knew?

But what does he say about our beloved hang-outs?

He likes the biscuit and gravy at Wink’s. He praises Richard’s real pit and local livermush. He likes the hickory at College, along with the feeling of going back in time once you go inside.

Martin loves the cars and the old advertising signs at Gary’s, along with their “Funeral Meal” of barbecue, slaw, baked beans and chips for $6.50 a plate. His waitress, who didn’t give him the senior citizen discount, earned a large tip for saying she never would have guessed he was a senior.

But you know what’s good around Rowan. What’s fun is that Martin takes the reader along for a ride to places you may never have heard of, like Stephenson’s Bar-B-Q in Willow Spring, a favorite of mystery writer Margaret Maron, who was a distant cousin to the late founder, Paul Stephenson. Paul’s brother is Shelby Stephenson, who is N.C. Poet Laureate through the end of this year. Martin is good at finding connections.

He also writes about Sweet Potatoes restaurant in Winston-Salem, and while the food is definitely Southern home cooking, with hints of soul thrown in, I wouldn’t call it a roadside eatery.

It’s a sit-down restaurant with cloth napkins, and usually, a line. It’s a delicious experience, and it’s generous of Martin to give them a little attention.

His first section covers I-26, which takes in Mars Hill to Tryon.

After I-40, he sojourns on I-73 and I-74, which have not been completed, but run roughly south from Greensboro. Here he stops in at the famous Snappy Lunch in Mount Airy.

His trip on I-77 goes from Charlotte to Dobson, stopping in his beloved Davidson at the Soda Shop.

And on his I-95 route, he finds quite a few seafood places, along with barbecue.

It may seem this book is heavy on barbecue, and it is. But many barbecue joints also serve good, old-fashioned home cooking. Martin includes a few delis and bakeries, diners, country kitchens and more.

If breakfast is the best meal at a place, he says so, though he is always kind. He probably wouldn’t write about a place if he really didn’t like it.

The idea of the book is that it is of a size that could fit in your glove box, or a pocket in your door so you can take it along as you travel the highways of North Carolina.

Martin credits friends for helping him pick the places he writes about and that list alone is a who’s who of North Carolina luminaries.

This is an updated version of the 2006 “Interstate Eateries.”

The paperback book is $16 and will be available in about two weeks.

Whale of a weekend