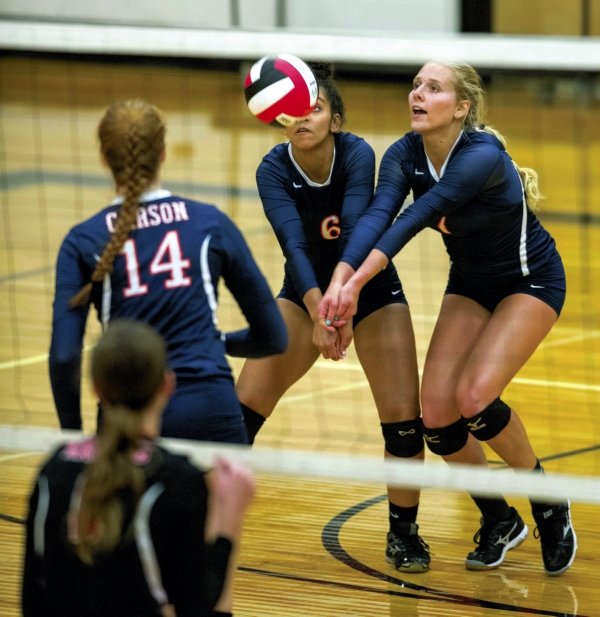 Carson’s Dominique Wilkerson (6) and Elena Turnbull (7) move to the ball against South Rowan during a match on Sept. 6.

CHINA GROVE — It took barely an hour on Monday evening for Cox Mill’s volleyball team to knock out Carson and take control of the South Piedmont Conference race.
“I feel sorry for the fans who came to see a good volleyball match,” Carson coach Kelan Rogers said. “Instead they saw a rear-end kicking.”
Cox Mill outside hitter Taylor Rowland, a 6-foot-3 junior committed to Auburn, did most of the kicking. She was good last season and has gotten better. She blasted 18 indefensible kills that headed straight down to the hardwood and led the Chargers to a 25-10, 25-23 and 25-18 victory.
The few times Cox Mill looked flustered, setter Courtney Weber, a South Carolina commit, looked for Rowland, and Rowland, who had eight kills in the tough second set, promptly got the Chargers out of trouble.
“Rowland is very special,” Cox Mill coach Michelle Phillips said. “One of the top 24 nationally in her age group and still improving.”
Cox Mill and Carson were among the top handful of teams in 3A in 2015. Both teams lost only three times all season, and Carson handed Cox Mill two of its three losses in the Carson gym — the first to tie for the SPC regular-season title and the second for the SPC tournament championship.
“Yes, we lost two to them here last year,” Phillips said with a smile. “Don’t remind me.”
There was some payback on Monday. Carson got mauled in the first set. Mallory Weast produced a rare Carson kill for a 6-all tie, but then Cox Mill (10-0, 9-0 SPC) reeled off the next 14 points.
“Fourteen in a row,” Rogers said in disbelief. “There’s no way that should ever happen against anybody.”
It was 20-6 before Elena Turnbull finally stopped that long run with a well-placed dink.
Carson came out hot in the second set against Cox Mill, grabbing a 3-0 lead on Turnbull’s serve. Lindsay Elmore had a spree of good plays in the middle, Cox Mill made several unforced mistakes, and suddenly Carson was leading, 17-11. That’s when Phillip called a timeout. She doesn’t have to do that every often.
When play resumed, Madison Barnhardt’s ace put the Cougars ahead, 18-11, but that’s where Cox Mill dug in, rediscovered Rowland and scored five straight points to get back to 18-16.
“It was like we were holding back and we weren’t very focused for a while,” Phillips said. “Sometimes we like to chase the energy when we should be making the energy.”
A fine dig by Weast led to a kill by Turnbull and a 23-21 Carson lead, but Lauren Phillips made back-to-back plays for the Chargers to make it 23-all.
“We just didn’t play well today, gave up that big lead in the second set and let them back in it,” Turnbull said. “It was mostly our own errors.”
Cox Mill made two championship plays for the final two points, including a backhand kill that Alison Siersma somehow fisted over the net for 24-23. Rowland finished it off, driving a sizzling kill from the back for set point.
“Up seven points, and then we just blew that second set,” Rogers said.
Carson got down, 7-2, in the third set, but made adjustments and started getting solo blocks from Elmore and Turnbull. A kill by Barnhardt lifted Carson back to a 14-13 deficit, but Cox Mill scored the next three points and pulled away.
“We knew they were good,” Rogers said. “There are times when we’re a pretty good team, too, but today wasn’t one of them. We played scared and when you play scared you’ll get beat every time.”
Carson (10-3, 7-2 SPC) lost for the third time in eight days. The Cougars were beaten by undefeated 4A Reagan last Monday and lost to Hickory Ridge, now the second-place team in the SPC, 3-2, after leading the Bulls 2-0, last Thursday.
•••
Carson has three of the leaders in 3A in kills in Turnbull, Weast and Elmore, but they didn’t have a big day against a Cox Mill team that got a lot of tips. Turnbull had six kills and three blocks. Elmore had seven kills and three blocks. Weast and Barnhardt had three kills each. … Carson setter Chloe Jacobs ranked third in 3A in assists coming into the match. … Rowland’s hitting percentage was .514 entering the match, second-best in 3A, and she improved on it. … Cox Mill has dropped only one set this season. That was in a 3-1 win against Marvin Ridge.