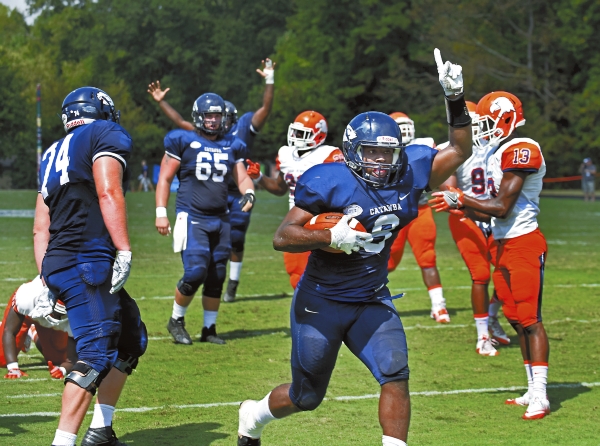 SALISBURY — For Eamon Smart, Senior Night at Florida’s Cape Coral High included 27 carries for 301 yards and four touchdowns in a 54-6 victory.
A thick-shouldered, stocky back who combined 200-plus pounds with 4.6 speed, Smart churned for 1,500 yards and 20 touchdowns as a prep senior in 2013, averaging seven yards per carry.
Smart also was a stellar student, making him an inviting recruiting target, and Catawba coaches were high-fiving after they were able to talk Smart into relocating to Salisbury for his college education.
While immediate greatness was predicted for Smart, success chased him slowly.
The first 100-yard game of his college career finally came Saturday afternoon at Shuford Stadium when he pounded Carson-Newman for 109 yards on 24 carries in a 40-20 South Atlantic Conference victory. The junior is Catawba’s Offensive Player of the Week.
“Eamon had that breakout game, and he showed he can be a punishing runner,” Catawba head coach Curtis Walker said. “Eamon runs with his shoulders down, and he doesn’t go backwards.”
Smart’s transition from high school to college football included lots of long hours and paid dues. Smart obviously was talented, but Catawba had productive, older backs in front of him in steady Cary Littlejohn and swift David Burgess.
Smart ran the ball 36 times for 144 yards as a true freshman in 2014, with more than half of that production coming against Tusculum — a game in which he carried 15 times for 81 yards.
His sophomore year was a rewind. He had a strong game early against Davidson — 15 carries, 86 yards — but his season totals were a modest 60 carries and 239 yards.
With Littlejohn’s fine career ended after the 2015 season, it was time for Smart to step forward.
“We let it leak to Eamon that the coaching staff was looking for improvement,” Walker said. “There were whispers that we knew would get back to Eamon through (running backs coach) Corey Ready. We hoped that it would be good motivation for him.”
It was.
“It was pointed out to me that Coach Walker wanted to see more production,” Smart said. “It made me work really hard, and I won the most improved award for spring ball.”
Spring ball culminated with a Blue-White Spring Game in which Smart hammered teammates for 90 yards on 21 carries — an unusually heavy spring workload that proved he was motivated and in shape. He ran with that proverbial chip on his shoulder, much to the delight of Walker and the coaching staff.
“Eamon had a great spring,” Walker said. “He showed that he could be our big back this year, that guy to replace Littlejohn, and we knew we had Burgess and (freshman) Quientel Goodwin to do good things outside.”
Smart’s junior season began with a quiet five carries for 32 yards in the loss at West Georgia. With Burgess out, his role expanded for the setback against Winston-Salem, and he punched out 55 yards on 13 carries.
Then came Saturday’s victory, and Smart, who has 42 carries for 196 yards on the season, was a major part of it. The only mistake he made — a fumble in the red zone — he made up for by recovering the ball himself in a pile.
Smart, 5-foot-10, 215 pounds, had never carried more than 15 times in a college game, but with those 24 attempts against Carson-Newman, he found a groove and a rhythm. He showed speed as well as power.
“It felt good getting that many carries, the most in a long time,” Smart said. “And after you break a few pretty good runs, you start knowing what to look for.”
Smart scored Catawba’s first touchdown on a 6-yard burst. He had a 12-yard run late in the first half, a 17-yard dash in the third quarter and a 20-yard gain in the fourth. He also caught two passes for 16 yards.
“We were running inside zone and power well,” Smart said. “I think our running game did start to wear on their defense some. Guys who were taking me on high early, were trying to cut my legs later on.”
When Catawba has a lead in the second half, opponents are going to see a lot of Smart. He can move the chains, rest Catawba’s defense and chew the clock.
“Every coach wants that luxury of a downhill runner who can attack a defense,” Walker said. “Eamon is not a guy defensive backs want to see coming at them in the fourth quarter, and he’s going to be counted on as we go forward.”
Off the field, things have gone smoothly from the start for Smart. He has a 3.42 GPA as a biology major.
He’s a long way from Florida, but his sister comes to his games, and his parents were able to watch Saturday’s breakout performance online.
“Everyone was excited,” Smart said.
This Saturday afternoon, Catawba goes to Wingate, a SAC program the Indians inexplicably have lost to five straight times. That means no current Catawba player has tasted victory against the Bulldogs.
Smart’s career numbers against Wingate are 11 carries for 52 yards, but he’ll be looked to for bigger things this time.
•••
Catawba’s other players of the week were also SAC players of the week. Cornerback Case Woodard keyed the Carson-Newman win with a pick-six. “That play energized the whole stadium,” Walker said. “They cheered Case for 90 yards and then they cheered some more.” … Brennan Lambert’s perfect kicking day included 4-for-4 on field goals and 4-for-4 on PATs for 16 points. Snapper Steven Bartlett and holder Joseph Dress handled their jobs on Lambert’s big day. “We work on it every day and we have good timing,” Lambert said. … The freshman, playing his third college game, was never nervous. “My mindset was that kicking in a college game is no different than all those Sundays I spent in the yard kicking with my dad,” Lambert said. Not to jinx the South Rowan graduate, but Lambert hasn’t missed a kick yet. He’s 6-for-6 on field goals and 6-for-6 on PATs. Walker said he has confidence in Lambert from 44 yards. That means a field goal attempt is an option when the Indians reach the opponent’s 27.