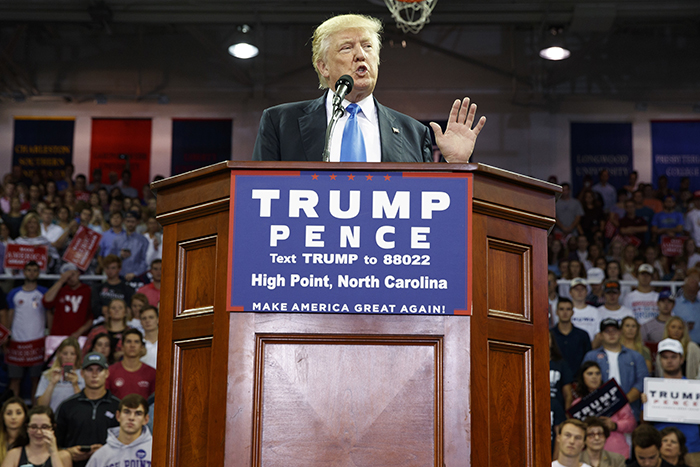 Trump spoke to a capacity crowd on Tuesday in a speech that questioned whether officials “pressed the wrong button” when admitting some immigrants, called for a temporary suspension of immigration from countries with terrorism problems and frequently dabbled in criticism of Democratic presidential nominee Hillary Clinton.

He started on immigration and national security — topics that seemed to consume most of his less-then-30-minute speech. He called a mass stabbing in Minnesota, a bombing in New York and events in New Jersey related to the bombing “Islamic terrorist attacks.

“These attacks were made possible because of our extremely open immigration system, which fails to properly vet and screen the individuals or families coming into our country,” Trump said.

The Islamic State claimed responsibility for the Minnesota stabbings. A person arrested in connection with the New York bombings is a naturalized U.S. citizen who was born in Afghanistan.

Trump’s remark about whether officials “pressed the wrong button” came shortly after he said that admitting refugees isn’t just related to terrorism. It’s also a quality of life issue.

“We want to make sure we are only admitting people into our country who love our country,” he said.  “It’s just a plain fact that our current immigration system makes no real attempt to determine the views of the people entering. Since 9/11, hundreds of immigrants and their children have been implicated in terrorism and terrorist-related activity in the United States.”

He said people from “dangerous countries” have slipped into America and been granted citizenship. He cited a recent internal audit from the Department of Homeland Security that revealed at least 858 immigrants with pending deportation orders were mistakenly granted citizenship.

“They were supposed to be deported and they were given citizenship,” he said. “So, either someone was very wrong or they pressed the wrong button.”

Later, Trump would go on to call for a suspension of immigration from some areas of the world. It’s the job of government to only admit people who will flourish in America, he said.

“We must stop the massive inflow of refugees – which Hillary Clinton is trying to drastically increase,” he said. “We should temporarily suspend immigration entirely from regions where safe and adequate screening, and I mean extreme vetting, cannot occur.”

His criticism of Clinton was sprinkled throughout the speech. From her time as the secretary of state to the Trans Pacific Partnership, Trump added a negative view of Clinton’s position to every topic he spoke about.

“Imagine what our country could become if we started working together as one people, under one god, saluting one flag,” Trump said to huge applause and chants of “U-S-A.”

A large portion of the crowd at Trump’s High Point rally was students. High Point University student Max Miller said he attended the event to learn more about Trump.

“I’ve heard all the news stories and figured I would come to help figure out my choice,” Miller said.

Student Joe Osgood, who attended the event with Miller, said he’s already decided Trump is the candidate he likes best. Trump may say the wrong things frequently but will always fight for what’s right, Osgood said.

Local veteran Rodney Cress also attended Tuesday’s event, spoke for less than a minute and led the Pledge of Allegiance. Cress says he supports Trump because of a perceived willingness to expand the military.

Cress said he believes Trump would “surround himself with a higher class of military intel.”

“Donald Trump is erratic and reckless, and frankly, I’m frightened to think of what would happen with regard to the safety of our men and women who are out there on the front lines defending our freedom if he were to become commander-in-chief,” Atkinson said in a statement sent to media outlets. “I stand with the people of North Carolina in declaring that Trump’s lack of respect for American soldiers and veterans is not only worrisome and disgraceful – it is completely out of sync with what most North Carolinians believe. In fact, it is outright contrary to our values.”