The Dart: Get on your game — Morris and Laton play golf most every day 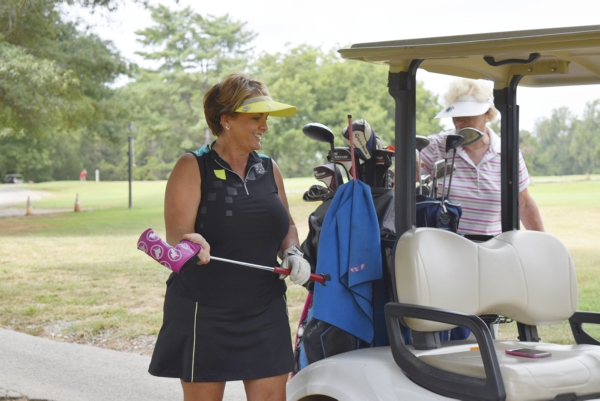 Kristi Laton, of Mount Pleasant, was pulled into golfing by her daughter. While her daughter dropped the sport after high school, Laton became a golf enthusiast. She can be found at golf courses around Salisbury almost every day of the week. Rebecca Rider/Salisbury Post

SALISBURY — It’s a bright, clear day at Rolling Hills Golf Club, and the course is peppered with golf carts, trundling along its gravel pathways. It’s great weather for a game, but for Kristi Laton and Susan Morris, any day is a good day.

“We’re just out enjoying the morning,” Morris said as the pair took a break under a tree.

Morris and Laton said they try to play most every day. Laton lives in Mount Pleasant, but said she drives up to Salisbury to play — the courses here are well maintained and friendly to female golfers.

“My husband tells everybody, ‘She works on her golf game,’” she said, when asked where she worked.

Morris prefers hopping around to different courses in the state — it gives her a change of scenery, she said.

Both women fell in love with the game later in life — Morris said she didn’t start playing until her 30s, and Laton said she was in her 40s before she picked up a club for the first time. But in golf, age doesn’t matter. The two regularly play with women in their 80s or 90s.

“It’s never too late to start the game of golf,” Morris said.

Laton started playing ten years ago when her daughter, a student at Cannon School, picked up the game. That first summer Laton said they practiced every day.

Laton still has those early score cards, and winced a little as she recalled the numbers.

While her daughter still plays, Laton said she’s no enthusiast. But Laton fell in love with the game.

“I just got playing and I never quit,” she said.

Morris started playing more than 30 years ago at Corbin Hills, then known as Brookdale. Morris said founders Mary Cobb McCombs and Gaither McCombs were her mentors.

They both love the challenge golf provides. According to Morris, you could use the same swing on the same course on the same day and still get different results. And there’s always room for improvement.

Morris retired this year, but said she used to love to drive the course as a way to unwind and relieve stress from a tough day at work. Golf requires players to constantly think about the next step in the game, and Morris said it helped take her mind off of the day-to-day humdrum.

“When you’re playing golf you’re not thinking about anything other than golf,” she said.

Morris and Laton met while participating in a Labor Day golf tournament, and said the game connects players to a lot of different people.

“Golf brings you in together,” Morris said.

Playing in a group brings a sense of fun and competition to the sport — Laton only plays alone when she wants to hone her skill. Some of the people she’s played with have become lifelong friends.

“I’ve met a bunch of wonderful people,” she said.

The two said the best advice they could give young golfers was to start out right. Go to a driving range to practice, and get someone who knows the game — not a husband or boyfriend — as a mentor.