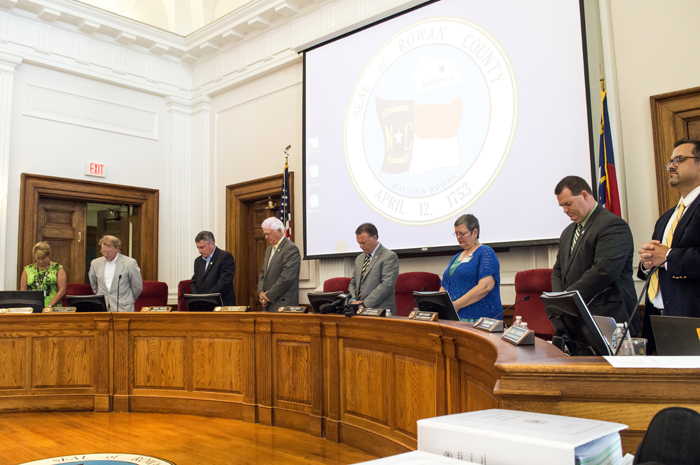 SALISBURY — In a 2-1 decision, the U.S. 4th Circuit Court of Appeals on Monday ruled in favor of Rowan County in a prayer lawsuit filed by the ACLU.

The ruling comes after months of deliberation. Oral arguments were held on Jan. 27.

Previously, North Carolina’s U.S. Middle District Court ruled that Rowan County’s prayer practices at the beginning of each board of commissioners meetings were unconstitutional. At issue in the case is that commissioners themselves gave sectarian prayers at the start of each meeting. The district court specifically found that solemnizing, sectarian prayer during meetings violated the Establishment Clause of the First Ammendment. The 4th Circuit Court reversed the lower court’s decision.

“In essence, the district court treated the Supreme Court’s jurisprudential silence on lawmaker-led prayer as conclusively excluding legislators from being permissible prayer-givers to their own legislative bodies,” Agee wrote.

However, Agee wrote that the history and tradition used by the Supreme Court in a critical case for Rowan — Town of Greece vs. Galloway — emphasizes a long-standing tradition of lawmaker-led prayer. In Rowan County’s case, county commissioners give the prayer.

The U.S. Supreme Court did not say anything that could be interpreted as limiting legislative prayer to only clergy, Agee wrote.

Greg Edds, chairman of the Rowan County Board of Commissioners, praised the court’s decision.

“We are very pleased with the decision and think the Court properly decided the matter,” Edds said. “Our attorneys are currently working through the decision and we will know more about it in the coming days.”

The ACLU, representing three Rowan residents in the case, said the court’s ruling is “out of step with the First Amendment’s protection of religious liberty.”

“Rowan County residents should be able to attend local government meetings without being coerced to participate in a sectarian prayer or worry that the commissioners may discriminate against them if they do not,” said North Carolina ACLU Legal Director Chris Brook. “As Judge Wilkinson wrote in his dissent today, the facts in this case are a ‘conceptual world apart’ from those the U.S. Supreme Court upheld in Greece, New York, and that is why we will seek en banc review.”

By requesting en banc review, the ACLU would be asking the entire U.S. 4th Circuit to hear Rowan’s case instead of only three judges.

In the 4th Circuit, opinion, Agee said opening prayers “carries special meaning for the thousands of state and local legislators who are citizens themselves.”

“If legislative prayer is intended to allow lawmakers to ‘show who and what they are’ in public form, then it stands to reason that they should be able to lead such prayers for the intended audience: themselves,” Agee wrote.

One factor in the decision was whether prayers were supervised and created by the Board of County Commissioners, instead of being a personal creation. The 4th Circuit court says there’s no evidence that the Board of Commissioners had any role in authoring the prayers.

Prayers never disparage, proselytize or insult, Agee wrote. He also wrote that there’s no evidence to show people who didn’t participate in prayers suffered as a result.

Commissioners who delivered prayers were all Christians, and the 4th Circuit also found that it’s insignificant that only Christian prayers were provided before meetings.

In his dissent, Wilkinson, offered a stark rebuke of Rowan’s prayer practices. He called the prayers a message of exclusion and a potential source of religious division. Rowan’s case is completely separate from the Greece vs. Galloway case, used as a central point in the majority opinion, he said.

“This case is more than a factual wrinkle on Town of Greece vs. Galloway … It is a conceptual world apart,” Wilkinson wrote. “No one disputes that localities enjoy considerable latitude in opening their meetings with invocations and prayers. But the legislative prayer practice here pushes every envelope.”

Wilkinson said that a ruling in favor of Rowan County could affect the nation.

“A ruling for the county bears unfortunate consequences for American pluralism, for a nation whose very penny envisions one out of many, a nation whose surpassing orthodoxy belongs in its constitutional respect for all beliefs and faiths, a nation which enshrined in the First and Fourteenth Amendments the conviction that diversity in all of its dimensions is our abiding strength,” Wilkinson wrote.

Until appeals are finished, county commissioners will  continue using a volunteer chaplain to deliver opening prayers before meetings, according to Edds.