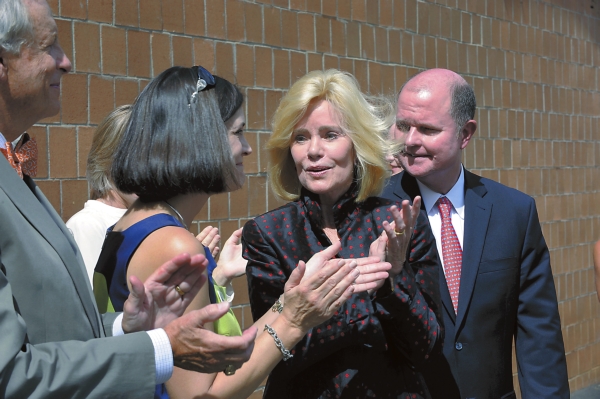 SALISBURY — Many hands went into creating and renovating the Ralph W. Ketner Center of Rowan Helping Ministries at 226 N. Long St. Because of the donations and volunteer work of community members, an organization that in turn gives right back to the community was established.

Rowan Helping Ministries started out in what is now the Ketner Center and has since expanded into the Robertson-Stanback Center across the street. Once some of the services were moved into the new building, renovation work started to update the Ketner Center.

On Sunday, those involved with the organization and other visitors reflected on Rowan Helping Ministries’ 30 years and also dedicated the newly renovated Ketner Center.

They also honored Ralph Ketner, co-founder of Food Lion, and his hard work in making the organization a reality.

Kyna Grubb, executive director of Rowan Helping Ministries, read from the letter she sent Ketner thanking him for allowing them to put his name on the building.

She wrote about how Food Lion had always been a part of her life, from shopping there with her parents as a child to working there herself.

“It occurs to me my life would have been very different without your influence and support of my community,” she read. “And I know that I am only one of a thousand lives Mr. Ketner has touched.”

During the ceremony, a Food Lion representative announced a donation of 55,000 meals to Rowan Helping Ministries in honor of Ketner’s community spirit.

Linda Ketner, Ralph Ketner’s oldest daughter, said a few words about her father’s dedication to serving the community. Her brother Robert and both of their families also attended.

She told the story of how her father gave clothes, toys and food to a family in need after she mentioned a classmate didn’t have a winter coat.

“Back in the car we were all quiet for quite some time, and then dad said, ‘There but for the grace of God, go I — any of us,’ he said. And at six, I’ll never forget that,” she said. “And I could tell you a hundred similar stories about my dad because that’s who my dad was. He had a generous spirit…”

She said Ketner was able to raise the money needed to build the original shelter in three days. It opened in the late 1980s.

Linda said Ketner would have been proud of what was being done at Rowan Helping Ministries.

“I’m sure what he’s really saying is to tell you thank you,” she told the crowd. “Thank you so sincerely because what you are doing is God’s work.”

After the ceremony, visitors were given tours of the new building, the Eagle’s Nest Transitional Housing and the Robertson-Stanback Center across the street.

Chris Bradshaw, chairman of the Shelter Ministries, said they relied on in-kind donations, negotiations and volunteers to get all the work done.

“We were able to do a lot with very little due to wonderful volunteering and donations,” he said.

Many former and current Rowan Helping Ministries employees and volunteers came to tour the new building, as did descendants of the people who started the organization.

Sabra Mills is the daughter of Haywood Cope. Cope worked with Rev. John Wilkerson to combine the services of local churches into the one central location that became Rowan Helping Ministries, all with the help of Ketner.

Mills said though her father never liked receiving recognition for the good he did in the community, she is glad his legacy is able to live on at Rowan Helping Ministries.

“It’s just an reaffirmation of my dad’s generosity and love for helping others,” she said.

Dianne Scott, former executive director, said she helped with the final touches of the renovation in the last few days.

“I’m amazed at how beautiful the building looks, how clean, how wonderful. The staff and volunteers have done a great job,” she said to the crowd.