‘Wedding Bell Blues’ a little green around the gills 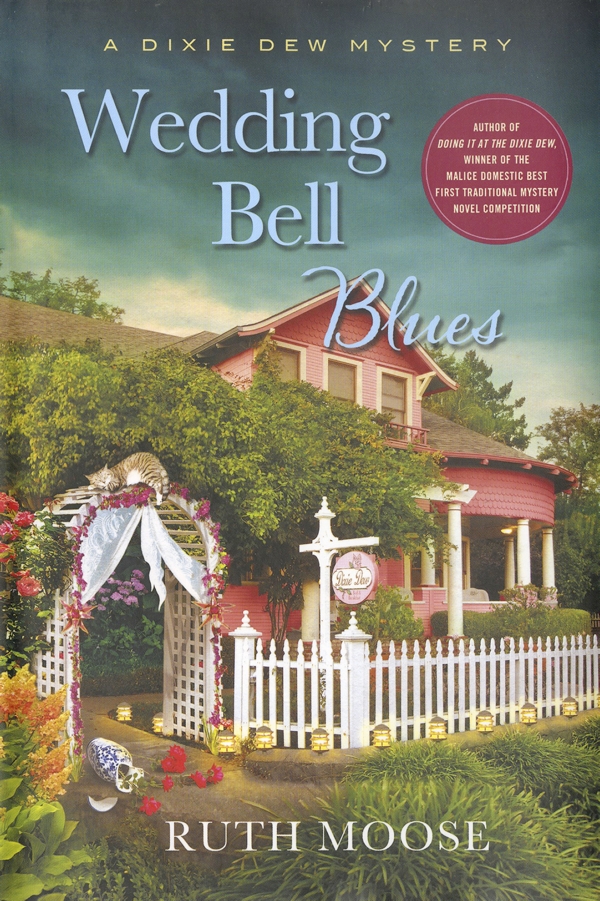 If you like your mysteries with a glass of sweet tea and a cast of characters whose quirks outnumber the stars, Ruth Moose has something for you.

After a successful outing with “Doing It at the Dixie Dew,” Moose has returned with her collection of eccentrics, crooks and nosy Beth, proprietor of the Dixie Dew. Back is Crazy Reba, who’s in a heap of trouble this time, and Beth’s major domo, Ida Plum Duckett, batty neighbor Verna and her rabbit, Robert Redford, and Beth’s sometime lover, Scott Smith, the carpenter and handyman.

The town of Littleboro, a sort of combination of her current home, Pittsboro, and her years in Stanly County, is abuzz. Crazy Reba shows up with a rock the size of Gibraltar on her finger saying she’s going to be a June bride, then Mayor Moss announces the first-ever Green Bean Festival, then Reba calls saying she killed God, and it just escalates from there.

In the first book, an older woman expires at the B&B. Bad news. Could it happen again? Well, you couldn’t have a mystery without a few bodies lying around.

The cast in this outing is quite large, and everyone’s related to someone else who’s involved in something that might be relevant to the central story. Or, is there a central story? There is so much going on in this book, it’s hard to say. Is Reba really getting married? Her friends are making her a wedding dress, Beth is baking a cake — all the preparations are moving along even though no one has seen the alleged groom.

When Reba calls Beth, sobbing, Beth finds a gnarly dude laid out on a picnic table by the side of the road, barely breathing. Off Reba goes to jail when Beth’s nemesis, police chief Ossie del Gardo, shows up.

Beth’s suspicions point to Motel 3, a run-down place with only two rooms open, run by the town bad girls, Allison and Andrea.

Back at the B&B, guests begin to arrive, judges for the green bean festivities, including one of Beth’s idols, newspaper columnist Debbie Booth (is she thinking of a Raleigh cookbook author I know?). Along with them comes a big city man, Miles Fortune, who has apparently spent a fortune on his clothes, hair and grooming.

Meanwhile, the green bean festival looms, the mayor gives a luncheon that features a surprise guest, Ossie and Juanita’s impending wedding has caterer Beth in a tizzy, and she gets a nasty phone call on a cellphone she found at the motel.

Ossie, as always, complains about her meddling, but Beth doesn’t care one whit what he thinks, and believes herself far superior to his paltry skills.

People get sick at the mayor’s luncheon, and even sicker at the green bean recipe contest. A green bean slushie sends Beth’s best friend Malinda straight for the fancy outhouse, and one of the judges is rushed back to the B&B.

Is this related to the dude on the highway or the dude whose much larger clothes were found in the motel room with Reba’s things? And who was that guy, anyway? Was Reba going to marry him or the man on the picnic table?

Is Scott ever going to finish the gazebo for the wedding and will he reconnect with his, ex, now a singing star, who is coming for the Miss Green Bean pageant?

So many worries, so many reasons Beth should lock herself in the Dixie Dew and stay out of all this crazy business.

Of course, she will not, which is what makes the story, but really, it gets kind of hard to hold on to all the threads and figure out the connections as the book continues. Is the sudden death of a visitor murder? Who is Mr. GQ magazine waiting for and why? Why has no one ever seen Mayor Moss’ mister?

Some of this will be revealed quickly in a short final chapter. Some of it you’ll have to work out for yourself. It feels like there’s a lot of leftovers that need to be cleared up. Maybe they’ll be reheated in another book featuring nosy Beth McKenzie and her B&B, where anything can happen.