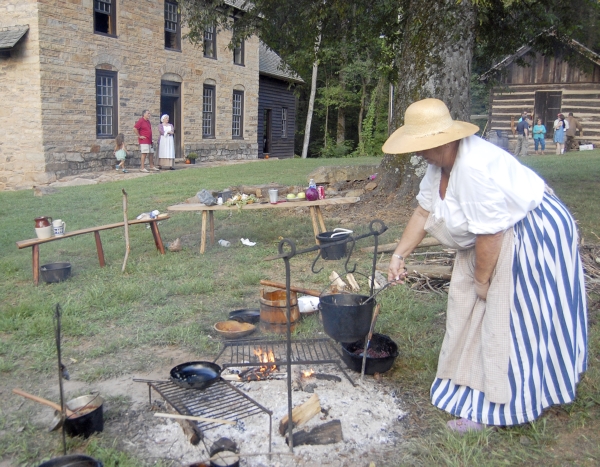 Amanda Raymond/Salisbury Post Kaye Brown Hirst, former executive director of the Rowan Museum, helped cook sauerkraut with bratwurst, along with red cabbage with bacon, onion and apples at the 250th anniversary of the Old Stone House celebration on Saturday.

She was also selling corn shuck dolls and chairs that she made.

Bollinger is a seventh generation descendent of Michael Braun, the builder of the Old Stone House near Granite Quarry.

The Rowan Museum celebrated the 250th anniversary of the Old Stone House, built in 1766, on Saturday.

The first part of the celebration was the Brown-Fisher Association family reunion. Aaron Kepley, executive director of the Rowan Museum, said about 90 people attended. After that, the public was invited to the grounds for activities, reenactments, presentations about the house and German culture and tours of the house.

Towards the end of the day, there was a special German Festival that featured German food, beer, wine and music from the Windsong Recorder Ensemble.

The proceeds of the event benefited the Rowan Museum’s educational programming.

Michael Braun, originally from Germany, built the Georgian, two-story house. The house was passed down the generations and later the spelling of Braun turned into Brown.

The house was left empty for many years and was in danger of being torn down in the 1950s. The Brown and Fisher families came together to save and restore the house and gave it to the Rowan Museum in 1966.

To celebrate German culture, there was German music and food cooked over an open fire, including sauerkraut with bratwurst and red cabbage with bacon, onion and apples. There was also apple butter and bread.

Janet Hammond, an intern at the Rowan Museum, said she enjoyed the laid back atmosphere of Old Stone House.

She said when anniversaries of historic events or landmarks occur, different generations may think differently about the history.

“That’s an opportunity to evaluate the history and get a new perspective,” she said.

Betsy Cunningham, who attended the event with husband Dean, said she thought about how the house had been through the Revolutionary War.

Steve Sterbenz commended the museum’s board for their work curating the house and said it was in great shape considering the disrepair it fell into for years.

“It’s just remarkable that it was restored in recent years,” he said.

Bollinger said she saw family members she had not seen in years at the reunion.

She said the 250-year-old building is a testament to the family’s history.

“Your heritage is living on,” Bollinger said.