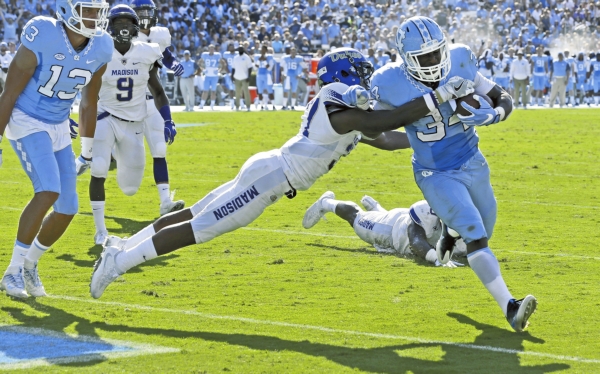 Trubisky completed 24 of 27 passes for the Tar Heels (2-1), including a program single-game record of 18 straight before calling it a day in the fourth. He has thrown 156 passes without an interception, breaking a record that had stood since 1997.

The Tar Heels scored touchdowns on eight of the junior’s nine drives, the exception being a one-snap possession before halftime. Each of those drives was at least 72 yards, with Trubisky connecting on a 75-yard flea flicker score to Ryan Switzer and a 71-yarder to Mack Hollins.

“I think it’s just becoming more comfortable week to week,” Trubisky said. “It’s all about being better than the player I was last Saturday.”

Meanwhile, Elijah Hood and T.J. Logan combined to rush for five scores for the Tar Heels (2-1), who finished with 635 yards and didn’t punt until midway through the fourth quarter.

Khalid Abdullah ran for 116 yards and two touchdowns for the Dukes (2-1), who scored touchdowns on all three first-quarter drives. But they couldn’t keep up with the Tar Heels’ humming offense and didn’t reach the end zone again until the third quarter after UNC led by 21.

“They’ve got some great athletes, but we made some mistakes there early that gave them some real cheap ones, some easy scores where they didn’t have to work very much,” JMU coach Mike Houston said. “That’s our fault.”

This was a reminder of what UNC’s offense can do after some uneven moments against Georgia and Illinois. But the defense isn’t in a great spot entering Atlantic Coast Conference play between injuries and shaky execution (495 yards allowed).

The Tar Heels were without tackle Naz Jones — who tweeted that he had a concussion — and end Tomon Fox due to injuries. Another end, Dajaun Drennon, hasn’t played all year with an undisclosed injury.

Redshirt freshman Jason Strowbridge started at end and got banged up, too. But UNC had junior end Tyler Powell for the first time; he returned this week after being away due to personal issues.

Fedora was irked by the Tar Heels’ five unsportsmanlike-conduct penalties among 10 penalties for 110 yards.

“We can do things within the game and screw up, but we’re not going to screw up after the whistle,” Fedora said. “So we’ll get that corrected.”

It was a difficult week here with one of the Tar Heels turning himself in on an arrest warrant for misdemeanor sexual battery and assault on a female student in February. Junior Allen Artis, a reserve who played on special teams, was suspended indefinitely once charges were filed Tuesday.

“I thought our guys have handled the situation fairly well, but they’re young,” Fedora said. “They’re kids and they’ll grow from it and hopefully we’ll be better men from it.”

JAMES MADISON: The Dukes, who won a share of the CAA title last year, open league play at Maine in the first meeting since 2012.