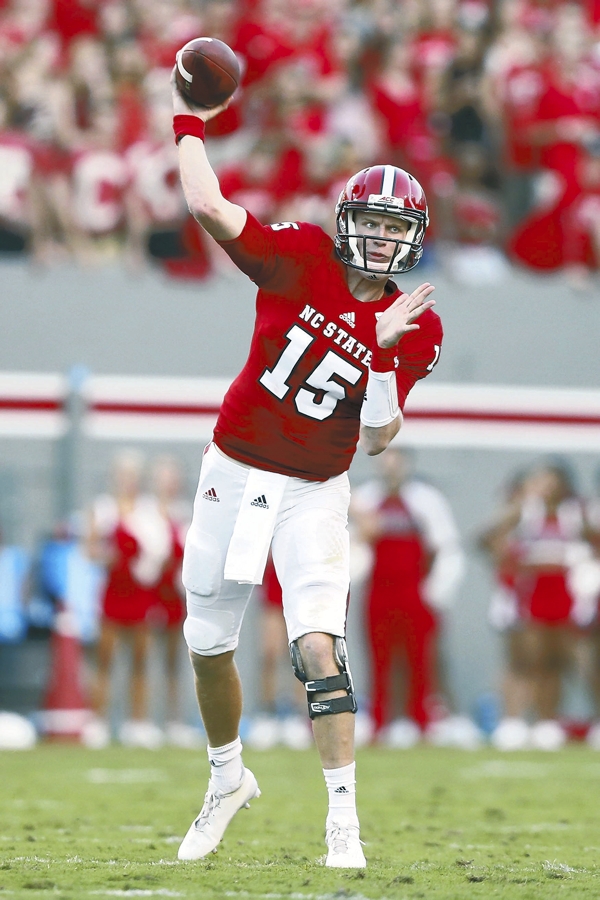 Just that quickly, North Carolina State’s already potent offense might have discovered another weapon — and given other teams something more to worry about.

The Wolfpack’s backup quarterback rushed for two TDs and threw for a third in a 49-22 rout of Old Dominion on Saturday night.

If the plan is to use McClendon as a short-yardage change of pace near the goal line against a tough gauntlet — one that includes No. 18 Notre Dame, No. 5 Clemson and No. 10 Louisville in consecutive weeks in October — he wouldn’t say so.

“That’s probably the coach’s call right now,” McClendon said. “Other teams, they’ll probably be game-planning (for) that, and we’ll have to call something different. I’m not sure what else we’ll see in the future.”

Starter Ryan Finley was 24 of 28 for 281 yards with three touchdown passes — two to Jaylen Samuels — prompting Old Dominion coach Bobby Wilder to call him “a star” and helping the Wolfpack (2-1) bounce back from a dispiriting loss at East Carolina.

“It was a tough week, and our guys hung together,” coach Dave Doeren said. “It wasn’t perfect, but it was a lot better. … We hung together, and we’re going to stay together.”

Finley, a graduate transfer from Boise State, beat out McClendon during preseason camp, and in his first two starts, N.C. State averaged 511 total yards and 39 points.

The Wolfpack gained 470 yards in this one, with Doeren bringing in McClendon for three goal-line situations.

Each of McClendon’s three snaps in those spots went for TDs: He scored on runs of 1 and 3 yards to help N.C. State take a 14-3 lead, then hit Thaddeus Moss — the son of former NFL receiver Randy Moss — with a 3-yard scoring pass.

“Jalan’s a great teammate, and he understood why Ryan was in front of him,” Doeren said. “He was going to have opportunities, and he seized them today, and I’m proud of him for that. … He’s got a great future, he does.”

David Washington threw two touchdown passes to Zach Pascal and Jeremy Cox had a 65-yard touchdown run for Old Dominion (1-2), which has lost two straight. The Monarchs had just 63 total yards in the first half.

“We needed to play better offensively in the first half than we did,” Wilder said.

Old Dominion: Since the program launched in 2009, the Monarchs have yet to beat a power-conference team. This was their third loss to N.C. State in three seasons, their sixth loss to an Atlantic Coast Conference school since 2013, and they’ve yet to hold the Wolfpack to fewer than 38 points. Their next crack at the ACC comes next September when North Carolina visits. One problem: They didn’t get much from RB Ray Lawry, who carried nine times for just 14 yards — well shy of what would have been his third straight 100-yard effort.

N.C. State: For much of the night, this didn’t look a whole lot like the same N.C. State defense that gave up 445 total yards and 33 points to East Carolina. The final numbers might not look that way, but this effort was better. The Wolfpack allowed 321 total yards, but much of that came in three chunks: A 91-yard touchdown drive in the third quarter prolonged by a fake punt in ODU territory, and two other scoring drives in the fourth quarter after the Wolfpack already had the victory well in hand.

455.2 — McClendon’s passing rating immediately after his short touchdown pass to Moss came on his first attempt. He ended the game with a rating of 222.6 after completing 3 of 4 passes for 31 yards.

Old Dominion: The Monarchs begin Conference USA play next week with a visit from a Texas-San Antonio team that probably should have held on to beat Arizona State on Friday night.

N.C. State: The Wolfpack have a week off before instate rival Wake Forest visits Oct. 1 to wrap up their manageable early season schedule.

“We had a mission to get a win” — N.C. State WR Stephen Louis, on the team’s mental state during the week after the loss at East Carolina.