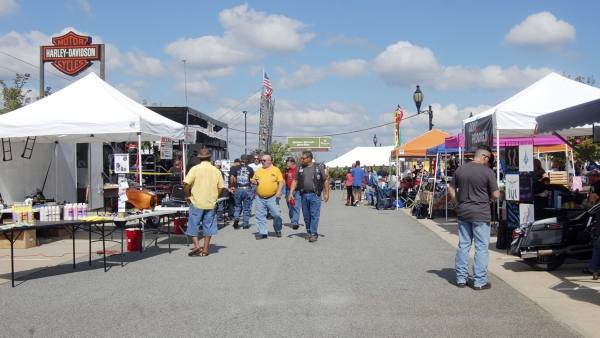 Amanda Raymond/Salisbury Post Vendors and sponsors brought ice cream, barbecue, jewelry and other goodies to the Biker Blues and BBQ Ralley at Tilley Harley-Davidson on Saturday.

SALISBURY — Tommy Houston, from Martinsville, Va., has been competing in barbecue cooking competitions for 14 years. He and others on the Checkered Pig team travel from coast to coast to compete in different contests. They’ve won 22 state grand championships and over 300 other awards.

It’s hard to believe there was a time when Houston didn’t know what a barbecue competition was.

Houston and 68 other teams competed in this year’s Tilley Harley-Davidson of Salisbury’s sixth annual Biker Blues & BBQ Rally and BBQ Classic on Saturday.

About 2,000 attended on Friday night and about 1,500 filtered in and out on Saturday.

Visitors enjoyed food and other goodies from vendors and sponsors. There was space in front of the stage where the Delmonicos were performing for people to line dance while others admired the motorcycles parked on the property.

There was also a charity poker run that raised $1,045 for the Salisbury VA Hospice House.

The barbecue competition is sanctioned by the Kansas City BBQ Society and is a NC State Barbecue Championship event.

Houston got interested in barbecue cooking competitions when he heard his friends talking about it. He said he took a competition barbecue class and started competing.

After winning first place for his ribs and fourth place for chicken, he was hooked.

He also has two barbecue restaurants.

“Barbecue’s our life,” he said.

Houston said winning awards is nice, but it’s the camaraderie of the competition that he really enjoys.

“I know if I need something and they got it, it’s mine and vice versa,” he said.

He even leads Cook’s Church on Saturday mornings where there might be a 10- to 15-minute sermon, prayer or a devotion. He said about 50 people attended that morning.

Bob Roberts, from Gastonia, travels all over the country with Two Old Men and a Grill. He said the cooks are like family to each other and some even bring their family and pets along with them as they travel.

“It’s just a special breed of people who do this,” he said.

Scott Adams, of Sauced!, is sixth in the country right now. From Charlotte, the team has competed in 29 competitions in 10 different states so far this year.

He said he generally sees the same group of people at competitions every week and if it wasn’t for the friendships he has made, it wouldn’t be as fun.

“We call it a roving family reunion,” he said.

The cooks also praised Moss for his dedication and hard work in making the event a success.

“He goes out of his way to make sure the cooks are happy,” Houston said.

Adams said Salisbury’s competition is one his favorites because Moss puts the cooks first.

“The ones that we like are the ones where teams are the focal point,” he said.

Neal’s Paint and Body Shop in Faith hand-made the unique trophies given to the top winners of the competition.

The top winners were: