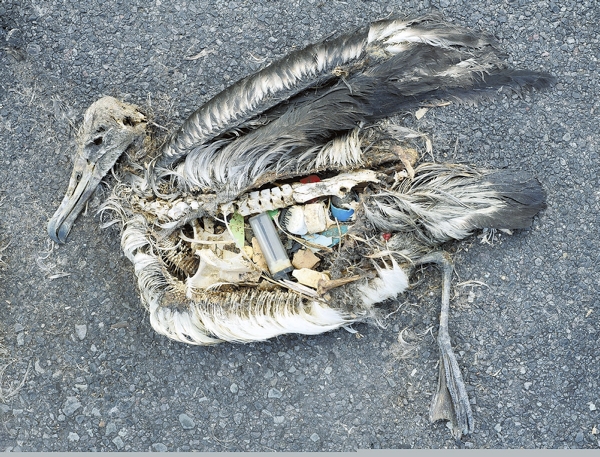 Photo by Chris Jordan shows the carcass of an albatross full of plastic items it had eaten.

Dianna Cohen,  visual artist and co-founder of Plastic Pollution Coalition, will speak at the Center for the Environment at Catawba College on Sept. 29 on “Plastic Pollution: Its Impacts on Our Health and the Health of Our Planet and What You Can Do.”

She spoke recently to Juanita Teschner of the Center for the Environment. This is an edited version of that conversation.

The presentation, scheduled for 6:30 p.m., will be held in Room 300 of the Center for the Environment building on the Catawba College campus in Salisbury. It is free and open to the public, but registration is required. To register, visit CenterForTheEnviroment.org or call 704.637.4791.

A: When I was at UCLA, I studied painting. I consider myself a painter, but I had started doing some collage work using brown paper bags from the supermarket and deconstructing them along the lines where they are put together. I began to become familiar with things that were printed on the bottom of the bags and ways that they were cut. I also began adding some stitching and sewing into those pieces because I wanted them to stay together better.

When I was doing that, at some point I added a plastic bag I had found in Belgium which had a botanical image of a plant printed on it in color. It said the name of the plant in Latin, and I just found a deep irony in the idea of printing a plant onto a plastic bag.

As soon as I sewed that plastic bag into the piece, I had this kind of eureka moment where I thought, “Oh, my gosh, plastic!” And my feeling about it at the time was it’s such a loaded material. It represents the future and technology and all these good things, and, oh, look around me, there are plastic bags everywhere and they come in this fantastic rainbow of colors.

Q: So how did this “aha” moment evolve?

A: I knew that when plastic bags were introduced in the late ’70s, early ’80s in the supermarkets, the idea was that you were saving a paper bag — a tree — by using a plastic bag, which sounds very logical. Of course, trees are renewable and plants are renewable but petroleum is not, and petroleum is primarily what plastic bags are made from. It takes hundreds of thousands of years for petroleum to be created under the earth’s surface.

Q: When did the fact that plastic isn’t biodegradable emerge?

A: My first exhibition of this work was in 1994, and it took about eight years before a few of the bags in some of my early pieces started to fissure and break into smaller bits, and that’s when I started paying attention to the chemical makeup of the plastic bag and educating myself about it.

Originally I thought it was organic and ephemeral, and then I realized that wasn’t the case.

It photodegrades or heat-degrades into smaller pieces, but it doesn’t go away.

Q: What have you personally seen that has propelled you into this particular passion?

It was incredibly disheartening for me, but I think a lot of people don’t make the connection between seeing that and our daily behavior. Our daily behavior is we go to the market, we run errands, we do things for our families, and most of our food and beverages are packaged in single-use plastic unless we live on a farm.

We have the ability to buy fresh food and fresh produce depending on where we live and buy it without plastic wrapped around it.

Q: How did this awareness morph into Plastic Pollution Coalition?

A: In 2009, I came together with several other people and we co-founded the Plastic Pollution Coalition.

The idea behind this was how do we create a global network of individuals, nonprofits and businesses that are all looking at the plastic pollution issue? What are all the perspectives they are approaching it from?

So several of the NGOs (non-governmental organizations) that are a part of our coalition are focused on human health and preventing illness. Some are focused on the impact of plastic in the marine environment, how it’s impacting cetaceans, turtles, fish.

Now there are studies showing that the chemicals in plastics and the chemicals that attach themselves to the surface of plastic, when ingested by fish, are actually transferring into the fish flesh, which means if we depend on wildlife from the sea as a protein source, we are also potentially being exposed to and absorbing these chemicals.

Q: In what ways has this knowledge impacted you?

A: On a personal level, my mom was diagnosed with breast cancer and died from it when she was in her early 40s. The type of breast cancer she had was estrogen receptive, but we now know that the chemicals used to make plastic have been linked to breast cancer, prostate cancer and brain cancer. And they have also been linked to obesity and diabetes, which are epidemic in the United States.

So it’s really important to come full circle and think about what’s going on here and how we can reduce our exposure to environmental toxins and how we can educate ourselves and become more aware so we begin to look at plastic packaging on our food as a potential toxicant.

Q: Your field is art, but this is clearly in the realm of science. How do you bridge that gap?

A: I originally started out at UCLA as a biology major. That was my interest, and what I found after two years in the program and reading a number of books, including “The Double Helix” by James Watson, is that people in the Science Department were not thinking outside the box.

I believe in order to create innovation and change in the world, you need obviously to be proficient at the area you’re studying, but you also need to have the ability to think expansively and creatively.

So the work we do at Plastic Pollution Coalition really lies at the nexus of combining art and communication and film and music with science, awareness, policy, etc.  It’s where all the things in the toolbox come together.

Q: How do you see your role in Plastic Pollution Coalition?

I’m passionate about using the tools that the Coalition has developed to help communicate the global plastic pollution crisis and to share with people that there are plastic pollution solutions and alternatives that exist right now and to really challenge people to look at how they can utilize those solutions and make their lives more plastic free.

The Center for the Environment was founded in 1996 to educate the college community and the public about environmental stewardship and sustainability, provide education for students, and bring diverse people and groups together to catalyze sustainable solutions to environmental challenges. For more information, visit www.CenterForTheEnvironment.org.