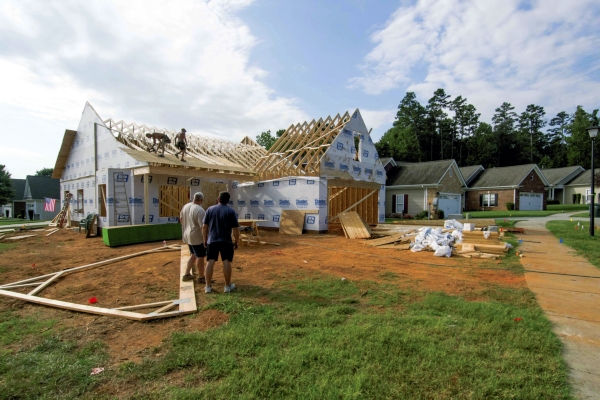 JON C. LAKEY / SALISBURY POST Workers from Efird Construction work on framing in a new house on the corner of Garner Drive and River Birch Drive. Spencer Lane Construction is the general contractor building the houses in the neighborhood. Several new houses are going up in the Gables at Kepley Farm on Faith Road. Framers, Heating and Air and Drywall crews are scattered about the neighborhood busy working on their tasks before moving on to the next house. Thursday, September 15, 2016, in Salisbury, N.C.

SALISBURY — Both residential and commercial permits increased in Rowan County for the second quarter of the year.

Thomas O’Kelly, building code enforcement director, said the commercial increase was mostly because of the Brenner Crossing Apartments on Brenner Avenue. The apartments are permitted individually.

“Mostly when you see a big jump in commercial plans, it’s because of apartments,” O’Kelly said.

Laurel Street Residential of Charlotte is developing the units in collaboration with the Salisbury Housing Authority and the city of Salisbury. Brenner Crossing replaces Civic Park Apartments.

Most of the commercial permits issued were in Salisbury, including the Burger King on West Jake Alexander Boulevard. Others went to St. Peter’s Lutheran Church on St. Peter’s Church Road, Carolina Malt House in Cleveland and a Dollar General with a Mooresville address.

New residential permits issued for the second quarter of 2016 totaled 70, with a value of $24.2 million, according to the Building Inspections office report. The number of permits was up 30 percent from 54 issued in the first quarter this year and 54 in the same quarter last year.

“I would definitely say that’s a typical increase,” O’Kelly said.

Residential permits were more dispersed throughout the county, including Salisbury, China Grove, Mount Ulla and Rockwell.

O’Kelly said China Grove was one of the busiest areas for the last year, along with other parts of the southern part of the county.

O’Kelly expects a typical year or even a small increase in new residential permits for the rest of the year.